Mark Dawidziak on Kolchak in Print 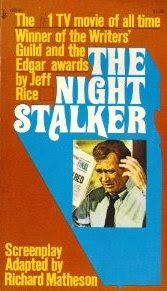 There was a time (that time being the mid-'70s to the early '90s) when it was ridiculously easy to keep track of Carl Kolchak in print. There was the 1973 Pocket Books edition of the novel that started it all, Jeff Rice's The Kolchak Papers, published under the title of the 1972 TV movie, The Night Stalker. Then there was The Night Strangler, Jeff's 1974 novelization of Richard Matheson's screenplay. And that was it. You had those two paperbacks and you had the complete Kolchak in print.

Nothing much changed for the next seventeen years. Jeff Rice wanted to do more original novels and novelizations for Pocket Books. When the 1974-75 series was starting production, there was talk of a five-novel deal for Jeff. All of that vanished like a vampire exposed to sunlight in August 1974 when Jeff's attorney notified Universal that the studio hadn't settled key rights questions with his client. Jeff was barred from the lot and the deals disappeared. He eventually had to file a six-count civil lawsuit, and, after months of legal wrangling, it was settled on the day the trial was supposed to begin, and, key to all this, Jeff emerged with firm control of  the literary rights to his character. That meant he could authorize Kolchak novels, short stories and comic books. 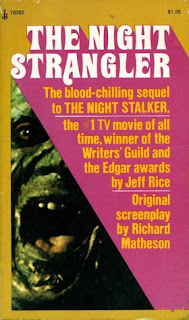 Flash forward from 1974 to October 1991. Some guy named Dawidziak adds one more book to that oh-so lightly weighted shelf of Kolchak books. Image Publishing brings out Night Stakling: A 20th Anniversary Kolchak Companion. Although non-fiction, this first history of the Kolchak character set the stage for new fictional stories with our seersuckered hero.While I have it on good authority that the author of Night Stalking greatly enjoyed the writing of that book, he was not satisfied with Image Publishing’s design and distribution (or lack thereof). But Kolchak creator Jeff Rice was satisfied with what he considered the balanced account of his novel being turned into a hit TV movie. Jeff was so pleased, in fact, he agreed to sign a five-year contract with Image founder Ed Gross for new Kolchak novels.

It was the start of an often-stormy four-year relationship between Rice and Gross. The initial five-year plan, however, was sound and ambitious. Gross would use Image's sister imprint, Cinemaker Press, to publish a mix of original novels and adaptations of the series episodes. Rice would have approval of the writers for books he did not wish to write himself. He also would have editorial control of the project. Publishing two or three books a year in the trade paperback size (six by nine), Cinemaker projected anywhere from ten to fifteen novels by the time the five-year contract was finished. It didn’t quite work out that way. 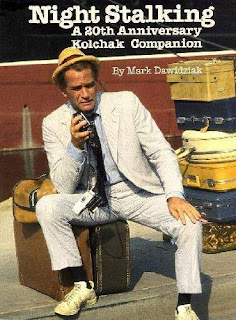 The project was to start with a reprint of the first two novels, The Night Stalker and The Night Strangler. These would be followed by an original novel. Gross did not have the funds to make it worth Rice's while to write a new novel, so Gross asked him for a recommendation. Rice suggested the author of Night Stalking. I was flattered but not at all certain I could come up with a story worthy of Rice's character. Before agreeing to terms, I submitted five story ideas to Rice and Gross. Everyone agreed that the first idea was the most promising, so I set to work researching the book that would become Grave Secrets. Each of the books was to be published under the umbrella title of The Kolchak Papers (Rice's original title for The Night Stalker). In other words, the titles would be The Kolchak Papers: The Night Stalker, The Kolchak Papers: Grave Secrets, and so on and so on.

Unfortunately, we never got to "so on and so on." The reprint of The Night Stalker was published in 1993 with a foreword by Stuart M. Kaminsky and original artwork by Kevin Barnes and Sterling Clark, Jr. It was printed in paperback and hardcover, but Gross was having no luck finding a distributor who could place Kolchak books in bookstores. Delays with artwork pushed Grave Secrets, the first original Kolchak novel  in twenty years, ahead of The Night Strangler. It was published in late 1994 as a trade paperback with original artwork by veteran illustrator Ed Silas Smith. Bringing Kolchak into the '90s was tricky, but the trick was accomplished in concert with Jeff Rice. How to deal with the twenty years before the end of the series and new adventures? Simple, just act as if they didn't happen. We decided that the last episode of the series, "The Sentry," was the case that got Carl fired from the INS Bureau in Chicago. A little later, Tony took a  job as an editor with the Hollywood Dispatch, a scrappy little tabloid nicknamed "the Disgrace" -- respectable, but just. Tony, of course, hires Carl, and, fast-forward, it's 1994. Carl is the same age. He talks the same. He acts the same. Jeff updated the character biographies accordingly. 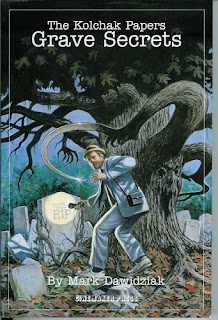 During a trip to Los Angeles, Jeff Rice and I scouted locations for Carl’s new home base. The old Hollywood Citizen-News building, a few blocks off Hollywood Boulevard, became the site for "the Disgrace." We checked out an unbelievably depressing hotel nearby and decided to check Carl in. "Dare we do this to him?" Kolchak’s creator asked me as we stood in the shabby room. As we left, Jeff Rice opened the minuscule closet and observed, "Hmm, just enough room for a straw hat and seersucker suit."

Grave Secrets opens with the mysterious death of land baron Glen Gilmore. The grave secret behind this killing is buried more than two-thousand miles away and more than 150 years in the past (heh-heh-heh).

I was pleased. And I was even more pleased to learn that Jeff Rice was pleased. All in all, a very pleasing situation, right? It would have been if Grave Secrets had received anything that could be charitably called distribution. Back at Cinemaker, though, things were going from bad to train wreck. Instead of Night Strangler, Ed announced an Omnibus edition of both The Night Stalker and The Night Strangler. Meanwhile, writer Doug Murray had finished the second original Kolchak novel, The Grand Inquisitor. Neither the Omnibus nor The Grand Inquisitor ever saw print, although Ed Silas Smith completed a striking Omnibus cover showing Kolchak "haunted" by Janos Skorzeny and Dr. Richard Malcolm.

In 1996, about four years into his five-year-contract with Cinemaker, Jeff pulled the plug and pulled back the rights to his characters. So, after four years, Cinemaker published two Kolchak books, the reprint of The Night Stalker and Grave Secrets. Work on the Omnibus and The Grand Inquisitor was completed, but neither book was published. Ed Gross, later editor of Cinescape magazine and co-author of Captains’ Logs: The Unauthorized Complete Trek Voyages (Little, Brown, 1995), accepts responsibility for the projects’ failure. He admits he is “no businessman,” and concedes that his ambition was greater than his resources. He remains a friend and an enthusiastic Kolchak fan. Indeed, much of his well-intentioned efforts were fueled by his great love of the character.

The Cinemaker collapse left Rice and Kolchak without a publisher. There were overtures from a couple of major publishing houses, but nothing on terms creatively and financially acceptable to Rice.

The publication of Night Stalking also sparked interest in Kolchak from comic book companies. Here, too, would be a path leading through years of frustration. By 1997, Topps Comics had been promising a series of Kolchak comic books for about four years. The company's biggest sucess has been its line of X-Files comic books, so a Kolchak connection makes sense. Topps' other titles included Dracula (a tie-in with the Francis Ford Coppola movie), Jurassic Park (another tie-in) and The Ray Bradbury Chronicles. All in all, it would appear that Carl would be in the right place. Jeff Rice signed a Topps contract in late 1992. He also wrote a comic-book script for The Night Stalker. After that, both Marvel and DC Comics  expressed an interest in Kolchak. But in the spring of 1997, Topps' new editor-in-chief stated his intention to put Kolchak In May of that year, however, Topps pulled the plug, telling Jeff that a new policy prohibited the launching of "any new titles." 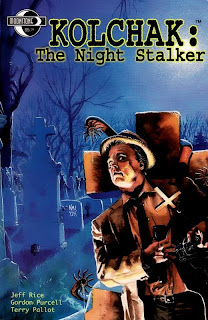 A few months later, Glass House Graphics, which had packaged comic books for all the major companies, made a run at Kolchak. An understandably frustrated Jeff decided to withdraw Carl from the field in late 1997. So the only quasi-Kolchak comics to appear at that point were: the 1974 Marvel spoof, The Night Gawker; Marvel's Night Stalker-inspired Paul Butterworth -- The Night Stalker (The Tomb of Dracula, April 1976); and Carl's Rice-approved cameo appearance in Sterling Clark's The Renegade No. 1 (Ripoff Press/Magnecom, October 1993).

The only new Kolchak book that appeared in 1997 was the revised, reworked Night Stalking, published by Pomegranate Press as The Night Stalker Companion: A 25th Anniversary Tribute.

And that's how things stood in 1999. The Kolchak river ran deep, indeed. Many a fright-minded filmmaker or writer has been swept up in its powerful current, exhilarated by the thrillingly tricky eddies splashing terror over mirth. Still, anyone getting far enough from shore's safety to know that river was deceptively deep also realized that it wasn't exactly what you'd call wide. From this perspective, the Kolchak world was severely limited. You could cross it rather quickly, if you so chose, covering everything that existed of Carl on film and in print. 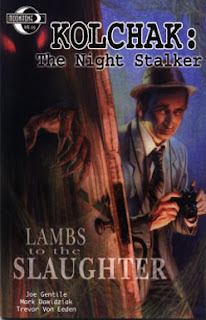 Enter Moonstone, a Chicago area comic book publisher making the Kolchak world a great deal wider and richer. I was contacted in 1999 by Moonstone founder Joe Gentile, proposing, of all things, a Kolchak comic book. I was not, to put it mildly, encouraging. I explained to the master of Moonstone the many failures. I described to him just how burned Jeff felt by past experiences with the comic-book world. I warned him what Jeff's reaction might be to publishers bearing lofty promises. To his undying credit, Joe was undaunted and undeterred. His proposal was forwarded to Jeff, and after some frank haggling on both sides, Moonstone received the green light.

Some thirteen years later, Moonstone remains the official Kolchak publisher for comic books, short stories and even some new novels. To date, they have published more than 40 Kolchak titles. The decision was made early on to follow the Kolchak universe established in Grave Secrets, a Los Angeles setting that allowed for an embracing of the sensibilities of the original novels, the TV movies and the series while also allowing for experimentation and expansion. The first comic book, Jeff's adaptation of the original novel, appeared in 2002 -- thirty years after the TV movie aired. It was followed that same year by Fever Pitch, an original story by Stuart M. Kaminsky and "Get of Belial," an adaptation of the unfilmed Kolchak: The Night Stalker episode. In 2004, those three comic books, along with Stefan Petrucha's "Mask of Moment," were collected in a trade paperback published with my introduction as Kolchak: The Night Stalker, Volume One. 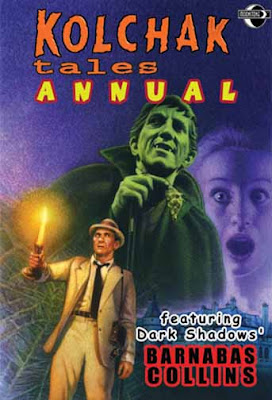 Many more titles followed, including CJ Henderson's Pain Without Tears and Pain Most Human, as well as several issues of Kolchak: Tales of the Night Stalker, edited by Dave Ulanski. 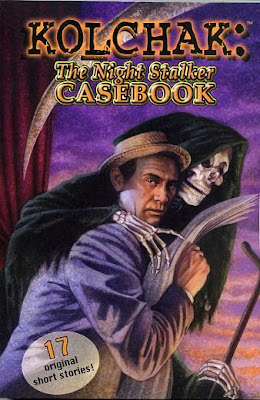 Rounding out the Kolchak shelf is Richard Matheson's Kolchak Scripts, the 2003 Gauntlet publication collection Matheson's screenplays for The Night Stalker, The Night Strangler and the unfilmed The Night Killers (written with William F. Nolan).
Posted by Mark Dawidziak at 1:40 PM