This is it—the last scheduled post for It Couldn't Happen Here. After careful consideration, we have decided to forgo an episode-a-day analysis of The Night Stalker revival. Instead, we leave you with this thoughtful overview of the short-lived series by David J. Schow.

Revamp Kolchak into post-McGavin Tormented Hero With A Dark Secret mode; lose the seersucker, lose the hat, lose the yelling matches with Vincenzo, subtract the idiosyncratic byplay — in fact, stomp cruelly on childhood recollect of everything that made Kolchak: The Night Stalker memorable.  Bad, bad TV people!  Evil reivers of cherished youth!

ABC sure thought their 2005 series was a massive fail, canceling it after only six episodes aired.

Fans of “Classic Kolchak” had plenty to bitch about, too, whining and stamping their hooves about each and every microscopic deviation from what they were convinced was some kind of gospel.  And in the middle of the first decade of the 21st Century, internet comment boards gave even the least literate of these champions ample space in which to wheeze and poot their displeasure … as though their opinions mattered for anything.

But Classic-K was abundantly available by that time, in the form of comics and tie-in books of new tales that played by the old rules.  For the most part, they did not preserve or perpetuate Carl Kolchak so much as shellac him in amber, the way John Gardner’s “modernized” novels tried to preserve the Playboy Philosophy-era James Bond — accurately, but at the airless cost of repeating what had already been done.  Or they recombined him with other fictional sleuths such as Sherlock Holmes in mashups. 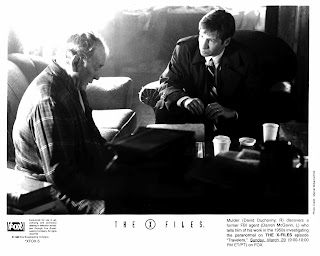 Like many other Kolchak acolytes, producer Frank Spotnitz had begun his career as a journalist, before he fell into The X Files for a marathon nine-season run.  When offered The Night Stalker by ABC and Touchstone Television, he grabbed it with both hands … because he had been 14 when the original series debuted, and freely admits he was one of the show’s biggest fans.  Accordingly, he had attempted to write Carl Kolchak into The X Files, a plan scuttled by Darren McGavin, who initially felt ripped off.  Once McGavin got a proper taste of The X Files, he came onboard as a thinly-disguised Kolchak-manque for two episodes.  In “Agua Mala,” McGavin points out to Fox Mulder:  “If I had had someone as savvy as (Scully) all those years ago … I might not have retired.”

While it is fair to say The X Files helped enable a Kolchak reboot, it was also a huge obstacle — Kolchak now had to fit into a post-X Files TV universe and not be dismissed (as some put it) as “X Files lite.”  Considering all the other spinoffs and features in the X Files family, it’s a shame Kolchak’s run was truncated, leaving potential character arcs undeveloped and unexplained.  As the pilot episode proves, Spotnitz’s heart was in exactly the right place, even extending to three hat-tips to Classic K: 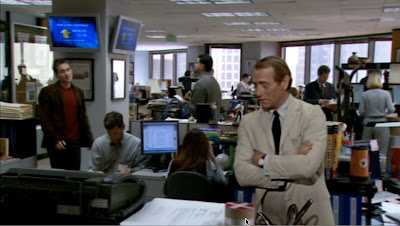 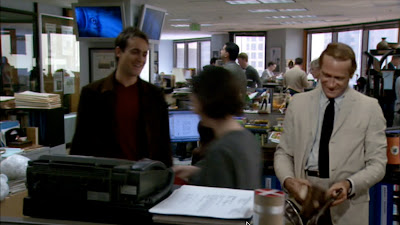 (1)  A “digital cameo” by McGavin’s Kolchak in the Beacon newsroom (look close and you’ll see it’s a shot of Kolchak putting a hammer and stake in his workbag, from The Night Stalker). 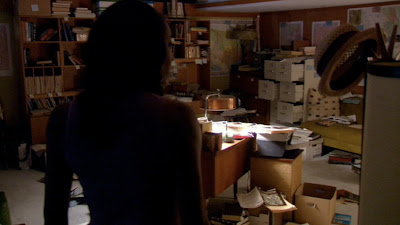 Vincenzo was recalibrated as minor royalty more than a father figure; this revised Tony would go to bat for Kolchak, especially when Constitutional rights were at stake.  Kolchak himself was subdivided into a threesome for the sake of more character interplay:  Kolchak himself, now a man harboring a dark secret on a personal quest; Perri Reed, a distaff side and reluctant partner who takes over much of Vincenzo’s old Doubting Tony role; and Jain McManus, who takes over the role of Kolchak’s camera/recorder and becomes his satellite/gofer.  A new Bernie Fain reappears (from the original TV movie), now refitted as an antagonist in the mold of The Fugitive’s Lt. Phil Gerard — thanks to incomplete information and circumstantial evidence, he wants to nail Kolchak for the murder of his wife, Irene (christened after the Kathie Browne character in “The Sentry”).

The blood so absent from the original series is now present in abundance, offered more as grueling aftermath than jumpy splatter.  Spotnitz specified a color palette where red was used almost exclusively in the context of death or danger (to the extreme of removing the red lights from police cruiser flashbars).  Another welcome wrinkle for a show called The Night Stalker:  This show is drenched in darkness, night and shadow, recalling David Chase’s protestation (“It’s called the Night Stalker, not the Day-for-Night Stalker!”) and evoking the hectic, after-hours urban POV popularized by Michael Mann, under whom Spotnitz had worked on Robbery Homicide Division in 2002

In an interview conducted by Devin Faraci at Chud.com in 2006, Spotnitz noted:  “… the more I thought about the more I realized you can’t do Darren McGavin better than Darren McGavin.  It’s a fool’s errand.  It was better to go for a completely different approach to the character and series and hope that over time, people would accept it — not as better than McGavin, but different.”

Slotted into a kiss-of-death berth against the hugely popular CSI on CBS, The Apprentice on NBC, and the 2005 major league baseball playoffs on Fox, The Night Stalker suffered pre-emptions via Alias, and had little-to-no paid advertising from ABC.  It was cancelled right in the middle of a two-part episode, with four episodes unbroadcast until the series was re-run on the Sci Fi Channel in 2006.  All episodes are currently available on DVD and assorted download options.

For more on Frank Spotnitz, see:
Posted by John Scoleri at 6:00 AM