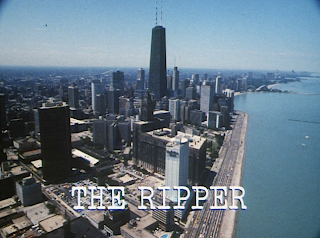 Nearly one hundred years after he claimed his first victim in London, Jack the Ripper seems to be back, terrorizing Chicago. Can Carl Kolchak convince the police that this nut thinks he's The Ripper?

JS: Every time I hear the TV theme, which starts off with Kolchak whistling something that would seem more appropriate for the Mary Tyler Moore show, I think, "this is horrible," and then it takes a turn, and I fall in love with it all over again. Sure, it would have been nice for Curtis/Matheson/Cobert to have stuck around for the series, but beggars can't be choosers. 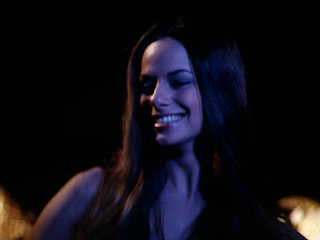 PE: It's a great theme song by Gil Melle. Creepy when it needs to be. Can't say the same for the music played in Werner's Boom-Boom Room. Sounds like a cross between prog-rock and that offensive incidental music found in some of Jamie Gillis' finer films (and for some of us, those two genres sound the same anyway). Yeah, I know it's a strip joint but what chick can shake it to that noise? There's a Larry Buchanan vibe to that goofy piece playing during the Ripper's escape from the massage parlor. Sounds like Zontar radioing earth.

JS: Another thing that stands out in the series premiere is how much more risque the show appears to be than the Movie of the Week entries. None of our prior streetwalkers showed this much skin. Who would have thought that dancers in a TV-show strip club would actually be topless.

PE: Some of the dialogue in this one is pretty schmaltzy. Where Kolchak's descriptive reporter-ese worked on the two tele-films, here (and in the future episodes) there are a few that test the boundaries of dopiness: 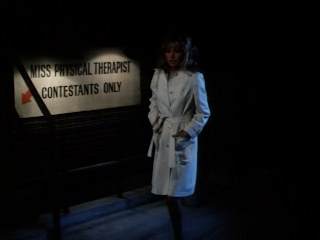 JS: The line might have been funny if it were not followed immediately by the young girl's murder at the hands of The Ripper. A particular shame considering she was a contestant for Miss Physical Therapist!?

PE: Did I miss the explanation of how Carl and Tony managed to land feet first in three different towns, working together at the same paper each time? And why would Vincenzo want to be with Carl again? I love the dynamic between the two, of course. I'm just questioning the logic (in a show about a 125 year-old murderer).

JS: I found the random coincidence of the second film more troubling, and considering they were in the car together at the end of Strangler, it seems perfectly reasonable to me that they would resign themselves to working together in Chicago (while Jo Ann Pflug must have continued on to New York without them).

PE: The amazing thing about the rooftop chase scene is that the cops didn't shoot each other. There doesn't seem to be any aiming going on here. That scene, by the way, is a direct rip-off of the "blood bank" scuffle in the first film. There's no chance, in the real world, that Carl would be standing around snapping shots while in the line of fire. To make matters worse, the scene is re-enacted later in the same episode! Two unexciting rooftop battles in one show does not an action show make. I'll give the scene points though for the hilarious "bowling with cops" scene when the Ripper tosses a two-by-four at a dozen cops and they go down in a row.

JS: Clearly the Ripper is cut from the same cloth as Stalker's Skorzeny and Strangler's Malcom, considering the way he tosses cops around.

PE: The rooftop chase isn't the only chunk borrowed from the original film. Witness Kolchak's trip into the Ripper's den.

JS: I think everyone involved is willing to stipulate to the fact that this episode borrows liberally from its predecessors.

PE: Simon Oakland just gets better in his Tony Vincenzo skin. His mano a mano verbal duels with McGavin are really what I look forward to in each episode. The two seem so natural together it's too bad they couldn't find another show to launch after this one tanked. When Carl tries to sell Tony a line about Updyke being a "bibliophiliac," you can see the gears turning in the editor's brain. Is Kolchak lying or not? The man can't tell, even after all this time.

JS: Which is part of Kolchak's appeal. Even when spinning an unbelievable yarn, he can still be very convincing. You feel as though he actually believes there's truth in whatever he's peddling.

PE: Despite the fact that he's a fan favorite, I never warmed up to Ron Updyke (Jack Grinnage). A descendent of Frank Burns and ancestor of Niles Crane, Updyke only annoys me with his constant whining, tongue-wagging, and gloating. All that's missing is a purse. William H. Macy would make a perfect Ron Updyke in a big-screen Kolchak.

JS: Yeah, if he keeps up the whiny act, that will become tiresome fast. It does allow for some comic relief, and serves as a reminder that at least Kolchak isn't the buffoon some might make him out to be.

PE: Wildly, Ruth McDevitt pops up as Ms. Eggonwiler (sp?), a nutty old woman who sends a "Dear Emily" letter to the paper about her mysterious neighbor (who turns out to be The Ripper). McDevitt must have made an impact on the powers-that-be as they brought her back later in the season as Miss Emily herself! I guess they were figuring no one would be paying attention but they never bargained for me.

PE: Much is made of the fact that Kolchak just happens to meet up with beasties everywhere he turns (22 times to be exact) but what I find more logic-stretching is that he's constantly encountering stonewalling police chiefs. Chicago could use Chief O'Hara.

JS: Had he made it to Gotham City, he'd have been kept busy a lot more than 22 episodes, considering that town's rogue's gallery.

PE: Reporter Jane Plumm (Colen) orders enough food to feed Kirstie Alley and yet she's really not that dumpy, despite Kolchak's assertion to the contrary. I've often wondered, when hiring actors for these types of roles, if the casting director sends out word that the production is looking for someone fat and homely. Colen would find semi-fame as Marsha the roller skating carhop on Happy Days.

JS: It did seem like there was a disconnect between the way the character was written in the script and the actress they hired for the role.


Vincenzo: Weren't you on your way to the john, Updyke?

JS: You mentioned the strip club music earlier, and yet that has nothing on the electronic noise we're treated to in the Sultan's Palace Massage Parlor.

JS: Giving credit where credit's due, the scene of Kolchak's arrest in the massage parlor is a great bit, fitting for the character and giving a brief break in the tension before we're reminded that there is still a killer out there.

PE: "Rudolph Borchert. Line One. It's Robert Bloch's lawyer." Unlike Bloch's vastly superior "Yours Truly, Jack the Ripper" short story (made into the dismal Thriller episode of the same name), there's no explanation for Jack's longevity nor reasoning behind his fear of electrocution while jumping off four-story buildings, soaking up loads of bullets, and taking out prison doors without a touch.

JS: I guess those details are the first to go when you switch from a 74 minute feature to a 52 minute episode of a weekly series. Interestingly enough, in an interview on the Night Strangler DVD, Richard Matheson mentions that he had considered Jack the Ripper for the sequel, and chose not to use it out of respect to his friend Robert Bloch. I like to think that Matheson's take on The Ripper would have been more effective than Borchert's.

PE: When you take away the dusty plot line, you're left with some snappy comedic bits and sight gags (Tony discovering that Carl's desk is filled with unanswered "Dear Emily" letters). Nothing wrong with that in this case. 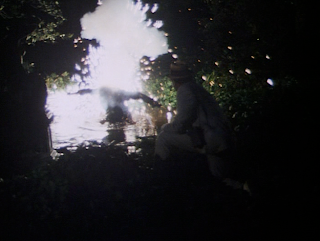 JS: I did like how Jack was dispatched (thanks to the Universal pyrotechnics crew), but was disappointed in the way the episode was wrapped up. It seemed to me to be very out of character for Kolchak to toss the article without even turning it in to Vincenzo. I would expect that even a misguided, dedicated reporter would continue to fight to get each of his stories published (unsuccessfully, of course), regardless of how strange or unbelievable they might be. For him to fold without even putting up a fight? That's not the Carl Kolchak Richard Matheson introduced us to. I'm hoping that we'll see a return to normal for Carl in forthcoming episodes.

Next up, Kolchak faces The Zombie!
Posted by Peter Enfantino at 6:00 AM