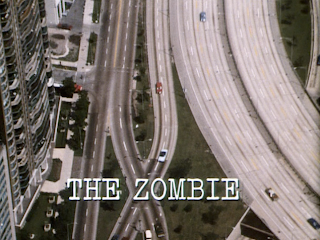 Somebody's breaking the backs of members of the Chicago Syndicate, and Kolchak's convinced that the prime suspect is a black man who has died and been buried—multiple times. Once again, it's up to our intrepid reporter to put this monster down, before it gets around to breaking him!


PE: Five minutes into this episode, I realize there's a lot of body-tossing going on in this series.

JS: The stunt players union must have been strong supporters of the show. For the youngsters following along, we should probably clarify that the zombie of the title is of the (now all too rare) voodoo variety. If you can believe it, zombies of the flesh-eating variety were at this point still only represented by the original Night of the Living Dead and a handful of knock-offs, such as Children Shouldn't Play With Dead Things and The Living Dead At Manchester Morgue.

PE: I'm not sure what's more laughable: the badly staged shootout between the cops and the Russo brothers or the idea that Monique Marmelstein (Carol Ann Susi) would fit in the trunk of Kolchak's Mustang. The idea that Kolchak could just drive his car right into the fray must have been implausible even back in 1974. It's a shame the producers (and writers) didn't keep Susi around longer as a recurring character (she'll appear in two subsequent episodes) as Monique, Carl, and Tony form a wonderful comedic triangle. She's certainly a more interesting character than her "replacement," Emily (Ruth McDevitt) an Aunt Harriet retread who made me grind my teeth even at the age of thirteen.

JS: Monique reminded me of the 70s answer to Wendy Jo Sperber. I wasn't fond of her at first, but grew to like her. She's a perfect thorn in Kolchak's side.

PE: The interplay between McGavin and Oakland gets funnier every episode. That's a giant plus since, in this episode at least, it takes a long time 'til we get to the monster. While Kolchak's at the morgue learning that one of the shootout victims is a return visitor (and full of chicken blood), he gets a call from Tony, asking Carl to apologize to Monique for her trunk imprisonment, lest she call her influential Uncle Abe. Vincenzo doesn't know Kolchak is talking to attendant "Gordy the Ghoul":


Kolchak: Chicken blood?!
Tony: Listen, Kolchak, Monique's gonna call her Uncle Abe... Abe the smiling cobra!
Kolchak: In his ear?
Gordy: That's right!
Tony: Kolchak, what are you talking about?
Kolchak: What happened?
Gordy: They buried him.
Kolchak: Buried him?
Tony: Bury who? Abe Marmelstein? If she gets to him, he's gonna come down on me like a ton of...
Kolchak: Chicken blood?
Tony: whatever! Then I'm gonna have to come down on you.
Kolchak (to Gordy): Why?
Tony: That's management.
Gordy: I don't know!
Tony: You're gonna have to apologize to her.
Kolchak (to Gordy): Can you help me?
Tony: Yeah, I can convince her to come to the phone. Now you hang on.

Pure comic genius. The smarts of the comedy in this series have never really been discussed as far as I know. The bad rep on the show is that it became "Monster of the Week" and nothing more. To be fair, that's how I remember it from viewing it back in its initial run. I'm hoping the fun level stays high throughout the run, never mind the monsters.

JS: If not for such interplay, the show would have been deadly boring. The bits are funny enough that you almost forget the horror trappings, until the writers surprise you with them. Oakland, who all too often is confined to the newsroom set, doesn't let that slow him down. He's always giving 110%, whether chasing Carl around the office or screaming into a telephone. A nice counterpoint to the restrained psychiatrist he played in Psycho.

Sweetstick: You think some of my boys been ripping off some of yours?
Sposato: That's right, Hickory Stick.
Sweetstick: Sweetstick!
Sposato: Whatevah.

Even back in the mid-70s, David Chase had the uncanny knack of knowing exactly how a mob boss would talk and act! 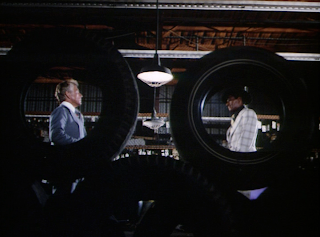 JS: I really enjoyed how that scene was staged, first with Kolchak's signature hat being just in plain sight as he sneaks around behind a car, to the shots of the Sweetstick/Sposato face-off through tires.

PE: I doubt if I liked this one very much as a kid. We get, essentially, 27 minutes of talk before the big reveal and even then the zombie's kept hidden in the shadows and shot from behind. I'm suspecting that's because the budget didn't allow for elaborate (or even mediocre) make-up effects. Ironically, the stuff I would have hated then I loved this time out. 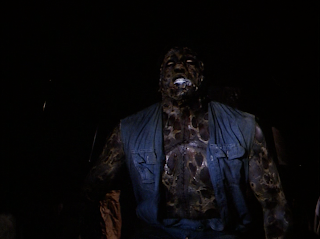 JS: I thought the make-up they used worked well enough, so I'm assuming that they chose to keep the Zombie in the shadows to make the reveal in the last act that much more frightening. And speaking of budget, I'm amazed at how much location footage we're treated to in these episodes.

PE: Joseph Sirola seems to be stuck in a suit too tight for him. That's my only explanation for his "Tex Avery" eyes and constant sweating. I'm Italian and I don't sweat that much so I don't think we can lay blame at the feet of Italy for this one. When he's not perspiring, he's chewing on as much of the screen as he can get his teeth on.

JS: We are treated to cameos from several great actors this time out including Scatman Crothers and J. Pat O'Malley. O'Malley, whose voice I immediately recognized from The Jungle Book, looks and sounds so much like Alfred Hitchcock that his line as the gravedigger referencing a "family plot," seemed like it couldn't be just a coincidence—except for the fact that Hitchcock's film wouldn't be released for two more years. 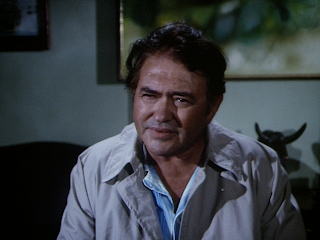 PE: What the heck is going on with Tony Vincenzo's hair when he comes to pick up Carl at Captain Winwood's office? Looks like he stopped at his local Grecian Formula dealer. And while we're on Captain Winwood. How many Captains and Chiefs are there in the Chicago Police Department and isn't it peculiar that Carl seems to run afoul of a different constable every week?

JS: Despite a slow start, the last act really pays off. Fortunately, unlike the series premiere, Kolchak doesn't deposit his story in the circular file. 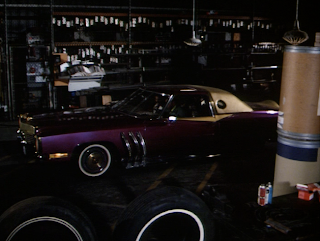 PE: Hard to imagine that the co-writer of this episode would revolutionize television drama 25 years later as creator of The Sopranos. In between, he found great success (and an Emmy) as writer on The Rockford Files. The year after this episode aired, Antonio Fargas (Bernard "Sweetstick" Weldon) didn't skip a beat and found his fifteen minutes of fame as pimp "Huggy Bear" on Starsky and Hutch. I'm pretty sure Sweetstick and Huggy shared the same tailors as well as car dealers. Charles Aidman (Capt. Winwood) is a veteran of our pithy remarks since he starred in two classic episodes of Thriller, The Terror in Teakwood and Knock Three-One-Two.

Check back at 12pm PST for Mark Dawidziak's take, and at 4pm PST this afternoon, we bring you the first of a three-part surprise feature article by Gary Gerani. You won't want to miss it!

Next up... Kolchak watches the skies!
Posted by Peter Enfantino at 6:00 AM