Spotlight On The Night Stalker Trading Cards — That Weren’t

I began creating products for Topps back in ’72.  Most of the movie and TV tie-ins were pretty bland back then (Adam-12, The Rookies, The Waltons – c’mon, what kid was gonna buy cards on those shows?), but things started to turn around by ’74, largely because of the new CBS TV series based on Planet of the Apes.  Lots of gorgeous 4 x 5 trannies on that hot property, resulting in a nifty trading card set celebrating what turned out to be a major pop cultural disappointment.

But on the same night as POTA, 10 pm Fridays, was ABC’s The Night Stalker, aka K:TNS.  I loved the TV movies and was an equally big fan of the series.  Fortunately, my boss and new best pal Len Brown also enjoyed stuff like this, so we conspired to give Jeff Rice’s rumpled Van Helsing a shot at bubblegum immortality, a process that would begin in our next focus group/concept test.

In other words, Len grabbed a handful of NS slides when he was up at ABC; then I had photos made to card size, fabricated a spooky border and wrote some simple captions.  These four or five dummy cards were glued to black presentation board and shown (along with countless other boards pushing various Topps ideas) to a bunch of kids hauled in for some product testing.  Often we’d view these toddlers through one-way mirrors, which was kinda weird—kids would catch on and make funny faces at us through the glass, which was no less than we deserved.

At the top of our board was a banner proclaiming, in one word, Nightstalker (I wasn’t responsible).  My dummy cards included a vertical image of K brandishing his cross (CARL KOLCHAK – NIGHT STALKER), a horizontal pic favoring Oakland, with McGavin browbeating him (INS EDITOR TONY VINCENZO), a scene from “The Spanish Moss Murders” (SWAMP MONSTER ATTACKS!), an image from MR. R.I.N.G. (MORE THAN HUMAN) and that vertical posed image of McGavin and Richard Kiel from “Bad Medicine” (DEATH FROM THE PAST).  Hopes high, Lennie and I sat down and waited for the kids to get to our board.

Sad to say, the rating for our proposed product was extremely low (one little boy seemed enthused – bless his heart).  The geek culture obviously hadn’t emerged yet, and we were still a few years off from the direct sales comic book revolution.  And Star Wars.

Amusingly, I was warned by a Topps exec that 10 pm shows were not designed for our audience, so it was suicide for me to propose The Night Stalker.  A year or so later Charlie's Angels debuts at 10 pm on a weeknight, we can’t help but tie-in (Farrah’s everywhere), and it launches the most successful TV series-based card set ever issued (five or six series, as I recall).  Life, alas, is change.

PS: Did anyone ever issue a Kolchak set?  I proposed the property to Rittenhouse a decade ago (along with Night Gallery) when they were doing their retro-TV autograph cards (Outer Limits among them), but never heard back… and never bothered to look back.  Kolchak certainly has a place as a limited edition collector card product for fans, and it would be a damn shame if nobody in the biz got around to publishing one.

P.P.S.: A small Florida company called Monsterwax issued a now out-of-print limited edition set called The Night Slasher, which was a photo-card parody of Kolchakian adventures. But no officially-licensed card products based on the actual TV show, as far as I can tell... 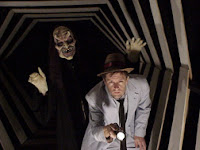 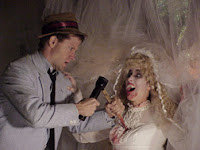 (which takes on that famous nightmare voyage from Varna to Whitby, as you-know-who feeds on the crew of the Demeter), is available now and has garnered several nice reviews.