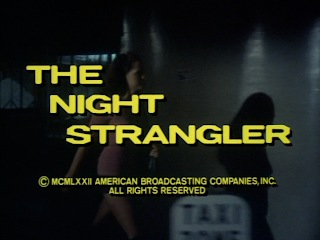 A year after the events in Las Vegas, Reporter Carl Kolchak has found himself in Seattle, Washington, where a strikingly similar series of murders is taking place. When Kolchak finds these murders appear to happen at regular intervals through history, he's unable to convince local law enforcement (not to mention his editor) that they must stop this several hundred year-old killer before he disappears for another 21 years.

PE: For the most part. I think the sequel is slower and could have been shaved of ten minutes and been a stronger film. Don't get me wrong, it's still enjoyable but not on a par with the first one. The boogie man is also kept under wraps quite a bit longer. We only get a real good look at Richard Malcolm at the climax when he has his "meltdown."

JS: Actually, the original version broadcast in 1973 was only 74 minutes. The DVD release contains a 90-minute edit used for theatrical distribution overseas. Thanks to Mark Dawidziak's indispensable Night Stalker Companion, I can tell you that Al Lewis was completely cut out of the broadcast version, and Margaret Hamilton's cameo and the underground tour were both abbreviated.

PE: Well then, that version, sight unseen, gets a higher rating from me than this one does. If I were to fill out an extra 16 minutes, I'd use Jo Ann Pflug's alternate belly-dancing takes rather than anything with the annoying Al Lewis. In some cases, longer isn't better. 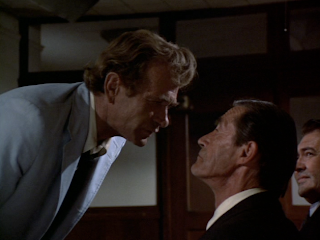 JS: I love that when we first see Carl, he's still talking about the vampire case in Las Vegas. Is it a stretch to ask viewers to believe that Vincenzo just happens to have relocated to Seattle as well? Sure, but pitting Kolchak against a Vincenzo clone just wouldn't have been the same as having Simon Oakland in the role. Genre veteran John Carradine does a fine job as Vincenzo's disbelieving boss this time out.

PE: I think it becomes more of a stretch when the duo land on their feet a third time together in a new town for the TV series. And, you're right, Oakland is fabulous in this role (and he only gets better once the series starts rolling) so we don't need stand-ins (as we get with Carl's girlfriend and Carl's enemies on the police force) to try to recapture the dynamic interplay between Oakland and McGavin that sparkled in the first flick. Oakland's impressions of Jackie Gleason as he's chewing out Kolchak are priceless. 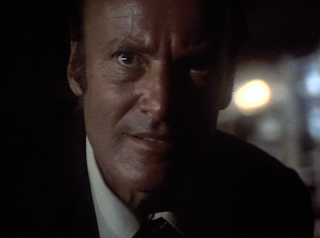 JS: The fact that the killer doesn't just strangle his victims—he also draws blood from them—allows the audience to believe that Kolchack may have stumbled across another vampire, but Matheson manages to conjure up an equally interesting 'monster' for our intrepid reporter's second encounter. Richard Anderson, who our regular readers will remember from the saving-grace seventh episode of Thriller, "The Purple Room," does a great job as Civil War doctor Richard Malcom. Kids my age will remember him most fondly from The Six-Million Dollar Man (I hate to think what he'd cost in today's economy), where he played Steve Austin's boss, Oscar Goldman.

PE: When he starts to rot, Anderson looks a lot like one of our old friends, Dr. Jonas Temple (played by The Night Stalker's Barry Atwater), in the Outer Limits episode "Corpus Earthling." 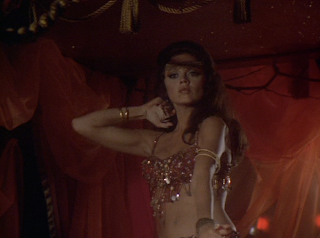 JS: Our leading lady this time out comes in the form of Jo Ann Pflug, who if not the most convincing belly-dancer you'll ever see, is far more beautiful than the inappropriately named Charisma Beauty (Nina Wayne). After this she went on to be one of the regular contributors on Match Game! 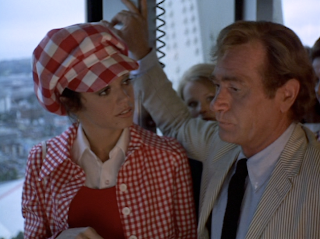 PE: She's a lot hotter than The Night Stalker's limp noodle, Carol Lynley. I doubt Lynley could have pulled off the belly dancing routine like Jo Ann does (although I do suspect at times there might have been a body double). I could have done without the scene filmed at the Needle where Jo Ann shows up disguised as a picnic table. As an incidental tie-in with our Marvel University blog (SHAMELESS PLUG ALERT!!), one of Pflug's first steady jobs was voicing Invisible Girl Sue Storm on the Hanna Barbera Fantastic Four cartoon (1967-68).

JS: The great Wally Cox steps into the role of Kolchak's faithful sidekick, as a newpaper researcher who digs out the truth about Malcom's longevity. He's particularly good in the scene where Kolchak finally convinces the authorities of his story.

PE: Oh, for an alternate reality where Wally Cox pesters Carl Kolchak every week on the TV series rather than Ron Updyke. Alas, that couldn't have happened even if the casting director deemed it the right thing to do since Wally died a month after The Night Strangler aired.

JS: Curtis seemingly left no stone unturned when finding stars for cameo roles... in addition to those mentioned above, we also get appearances from Margaret (Wicked Witch of the West) Hamilton and Al (Grandpa Munster) Lewis.

JS: Matheson chose a great setting for this installment, in order to utilize Seattle's famous underground city. You can read up on its history here. Once Kolchak stumbles across Malcom's lair, it's a nail biter right to the end.

PE: Yeah, it's almost too frightening, that table scene, for a TV flick. Very reminiscent of what Tobe Hooper would do with the farm house in The Texas Chainsaw Massacre the following year. 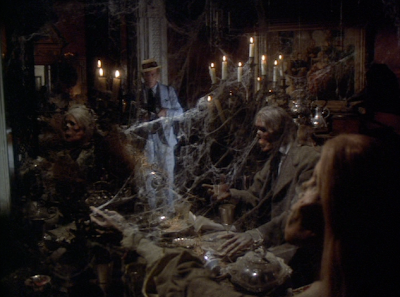 JS: Okay, to nitpick. How long do you think it took Malcom to come to the realization that his special elixir required that the lovely ladies blood be drawn within 30 seconds of death? Wouldn't you expect there to have been quite a few more murders back in 1868 as that little factoid was slowly discovered?

PE: You want to nitpick? Why would Malcolm tell Kolchak that if he doesn't take the elixir, he's gonna die? If I was the good doctor, I'd consider everything including a nutty newspaperman who might try to interrupt my ritual. Not a smart monster. And another thing: I get that Gail Foster (Lynley) was run out of town by the cops at the climax of The Night Stalker and probably wouldn't have wanted to see Kolchak above ground ever again, but Louise Harper is in the car and on the way to Chicago with Kolchak and Vincenzo. What happened to her when the series commences? Just wondering. And how does a slob like Carl get these beautiful girlfriends? It ain't his money. Can't be his charm. Doubt if its because he treats a lady like a lady.

JS: Once again, Robert Cobert sets the tone with his musical score. We even get some jazzy riffs a la Lalo Schifrin's Dirty Harry score this time out.

PE: A nice touch was our final scene in the car as the credits roll while Pflug bitches and moans. I love how the director is almost insinuating that this girl's litany of complaints may go on far longer than the credits.

Be sure to come back at 2pm PST for Mark Dawidziak's look at The Night Strangler, and 5pm PST for Matthew Bradley's Spotlight on Kolchak's return!

Next up, Kolchak faces The Ripper!
Posted by John Scoleri at 6:00 AM