Mark Dawidziak on They Have Been, They Are, They Will Be. . .

Writer-producer Chris Carter has said it loud and said it proud. He has said it often and emphatically. Even before The X-Files premiered on September 10, 1993, Carter was on the record saying he created the Fox series because The Night Stalker had given him so many wonderful fits of frights as a kid. Here's exactly what he said at the July 11, 1993 press conference introducing The X-Files and its stars, David Duchovny and Gillian Anderson, to the nation's television critics: "There was a show on when I was a kid called The Night Stalker. And it was a very, very scary show, and I loved that show. And I had an opportunity to create a show for Fox. And they said, 'What do you want to do?' And I said, you know, The Night Stalker was this fantastic show and I was scared out of my pants. I said there's nothing scary on television anymore. Let's do a scary show." That press conference, by the way, took place at the Universal Hilton, perched high on a hill overlooking Universal Studios, where Kolchak: The Night Stalker was filmed. 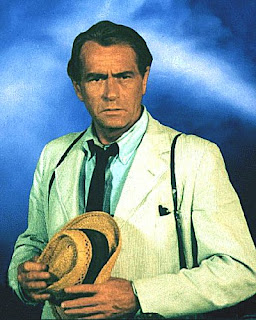 Many of the key writers on The X-Files -- including the prolific team of Glen Morgan and James Wong, as well as writer-producer Frank Spotnitz -- also were major Kolchak fans, which is why we soon were introduced to a character named Senator Matheson. As frequently noted, "They Have Been, They Are, They Will Be . . . " (also known as "U.F.O.", is the first of the Night Stalker episodes where that influence is particularly noticeable --stopped watches, mutilated animals, mysterious black substance, shady men in suits, anti-government paranoia and official suppression of information all were standard fare on The X-Files. To me, this episode, "Fire Fall," "Mr. R.I.N.G." and "Primal Scream are the ones that thematically have the most X-factor in them.

Carl gets things going, as usual, with the opening narration: “I knew this one was more than just the biggest story of my life. It was the biggest story in the lives of everyone on this planet. I fought for the story -- fought harder than ever before because I knew it was more than news, much more. I felt people should know about it so they could be prepared when it happened again, if it’s possible to be prepared for something like this.”

This was the episode evaluation that appeared in The Night Stalker Companion:

The monsters on The Night Stalker normally kept to the shadows. In "U.F.O.," the problem was completely averted because we didn't see the alien presence at all (except the final view of the flying saucer, which, even for 1974, looks pretty chintzy). The extraterrestrials are represented, quite eerily, by a wind that grows in intensity, so . . . The episode is one of the series' best. It's cleverly shot, nicely paced and moody, but. . . it's also one of the dumbest. More than usual goes unexplained in this one. It's a bit too convenient for Kolchak to be holding the one thing that will drive off the aliens. Kolchak finds the flying saucer with no difficulty. The whole notion of a stalking unseen alien visitor would be used much more effectively in Predator (1987).

On repeated viewings, though, this one holds up quite well. Despite the obvious reservations, there is much to recommend it, not the least of which is . . .

GREAT GUEST CAST: Including James Gregory (Inspector Luger on Barney Miller), who had appeared in the “Where is Everybody?” pilot episode of The Twilight Zone (and in the third-season episode, “The Passerby”), and Mary Wickes, who contributed wonderful supporting comic performances to such films as The Man Who Came to Dinner (1942), Who Done It? (1942, one of Abbott & Costello's best), White Christmas  (1952) and Sister Act (1992). In addition to appearing in memorable episodes of I Love Lucy, Alfred Hitchcock Presents, F Troop and Columbo, she was a regular on an amazing total of nine series, the last of which was ABC’s Father Dowling Mysteries. The same year the original Night Stalker film aired on ABC, Gregory appeared in two episodes of Columbo ("Short Fuse" and "The Most Crucial Game") on NBC. Also appearing in the episode are Dick Van Patten (Eight is Enough), busy character actor Phil Leeds (Rosemary's Baby), Maureen Arthur (How to Succeed in Business Without Really Trying) and Len Lesser (Uncle Leo on Seinfeld).

GREAT TONY-CARL SCENE: One of the series' comic high points. Seated in his INS office, Tony Vincenzo is about to enjoy a gourmet dinner. He clearly loves to eat, and here is a table of delights. Kolchak bursts in with the latest gory details of the case. Tony is torn between professional  duty and personal pleasure. Heck, he's a tough veteran journalist. He can tackle both at the same time. He insists that Kolchak give him the details, no matter how nauseating. While Tony continues the meal, Kolchak continues running through the facts. Tony tries to maintain his gruff editor's exterior. It's a losing battle. The effects of this struggle are on his stomach, but they can be seen on his face. It's the type of very human moment that Simon Oakland could put across in beautiful fashion. And serving the food is another wonderful guest star:

German character actor Fritz Feld, who worked until he was almost ninety.. Often armed with his trademark hand-to-mouth pop (imitating the opening of a champagne cork), Feld appeared in such films as Bringing Up Baby (1938), The Phantom of the Opera (1943), The Secret Life of Walter Mitty (1947), Mexican Hayride (1948, with Abbott & Costello), Barefoot in the Park (1967) and The Sunshine Boys (1975).

SECOND OF THREE GORDY THE GHOUL APPEARANCES: And John Fiedler's Gordy is thinking about changing the "stiffs lottery" from birth year to time of death. Fiedler, like Carol Ann Susi, wasn't a true regular on the series, but all other morgue attendants were poor substitutes for Gordon Spangler. When cast as Gordy, Fiedler was best known for playing wimpy Vinnie in the Broadway and film versions of Neil Simon's The Odd Couple. His other notable films included Twelve Angry Men (1957), That Touch of Mink (1962), The World of Henry Orient (1964) and True Grit (1969). Fans of Rod Serling’s The Twilight Zone knew him for two roles, both in episodes written by the anthology series’ host -- Mr. Dundee in "Night of the Meek" and one of the field reps in “Cavender is Coming.” Star Trek fans knew him as Hengist in writer Robert Bloch's Jack the Ripper episode, "Wolf in the Fold." His other television credits included episodes of Thriller, Alfred Hitchcock Presents, The Munsters, I Spy and Columbo. After The Night Stalker, Fiedler earned a place in sitcom history with two memorable roles: Mr. Peterson on The Bob Newhart Show (the 1972-78 CBS hit on which Larry Gelman, who played Vinnie in ABC’s series version of The Odd Couple, also was a regular) and Woody on Buffalo Bill (NBC, 1983-84). Playing against the “Vinnie” persona, Fiedler made two memorable trips to Jack Klugman and Tony Randall’s Odd Couple series: as building manager G. Martin Duke in “Security Arms” and cruel trainer Mr. Hugo in “The Dog Story.” He also supplied the voice of many cartoon characters, most notably Piglet in Disney’s Winnie the Pooh features.

BEST MONIQUE MARMELSTEIN SCENE: Susi also is making the second of three Night Stalker appearances. But this is her favorite of the three. Hiding in a bathroom stall while a furious Carl berates her for giving away his pictures to government agents, Monique whines magnificently: "Be reasonable. What could I do? They had on suits, ties, credentials, they had some forms from the Internal Revenue. They knew all about me. They threatened an audit . . . I had to! They pull an audit on me and I go off the nearest bridge." Afterwards, she tries to console Kolchak by saying, "They didn’t look that good."


The influence of episodes like "They Have Been, They Are, They Will Be . . . " was so strong, Chris Carter and his team reached out to Darren McGavin for a guest role on The X-Files. It should have happened sooner than it did. The writers kicked around the notion of bringing Darren on as Kolchak. Given that ABC Circle Films controlled the dramatic rights to the character and producer Dan Curtis had an option on it at the time, it's uncertain whether this would have worked out, anyway. Then they thought about him playing Mulder's father. But Darren turned down the offers. He had been told that The X-Files had been inspired by The Night Stalker, and he took that to mean it had ripped off what they had done. Therefore, he said, he had no interest in doing the show. But a guest spot on Carter's Millennium, playing the estranged father of Frank Black (Lance Henriksen), led Darren to seeing that The X-Files was very much its own show (and a good one), and that led the way to his guest appearances as the FBI agent who first investigated the X-Files, Arthur Dales. It was Carter and the producers' way of honoring the debt they owed The Night Stalker. Darren played Dales on two episodes and had completed two scenes on a third when he suffered the stroke that ended his acting career. M Emmet Walsh substituted for him, playing Dales' brother, also named Arthur. Still, there's something altogether fitting about the producers' persistence and the forging of a link by making Darren part of the X-Files mythology.
Posted by Mark Dawidziak at 12:00 PM