All right, first things first, the title. Here's the official statement: I really don't care. "Firefall" or "Fire Fall" -- one word or two, it's still the same searing episode. I bring this up because, in The Night Stalker Companion, I made this title two words. Over the years, I've occasionally got the question, "Why did you make it two words when it's one on the screen?" My answer then (and now) is that I asked Universal if it was one or two. They checked the records and told me it was two. It was two on the copy of the script I had. It was two on copies of memos I had. It was two on a Universal press release. So I made it two, even though I assumed the title was a play on waterfall. And to those who said, "But it's one word on the screen," I replied, "Yes, and on the screen, for eight years on the air, the title of Magnum, P.I. was Magnum, p.i., with the p.i. not capitalized in the title sequence, even though Universal always has insisted the actual title has it in caps and every standard reference has it in caps, every press release has it in caps and the whole freakin' free world has it in caps." The box set for Kolchak: The Night Stalker follows the on-screen title and makes it one word. So now, all these years later, where do I fall on this heavyweight title match? I'm basically Tommy Lee Jones in "The Fugitive" when Harrison Ford tells him he didn't kill his wife: "I don't care!" If common usage and common consent make this one word, count me in.

On to more substantive issues. This is one episode that has improved for me over the years -- or let's say my appreciation of its merits has improved. I think it's a much better episode that I gave it credit for in The Night Stalker Companion. This one, like "They Have Been, They Are, They Will Be . . . ", is an atmospheric episode that could have been an X-Files investigation. But overall, the episode holds together better than I indicated in the book. There are many spooky images and eerie touches that linger long after the final credits, and the ending, with Kolchak fighting off sleep and fatigue is wonderfully evocative. Fred Beir manages to be ultimately sympathetic as the real Ryder Bond and genuinely creepy as the doppleganger Bond. I should have also given higher marks to the Don Weis direction, which moves this episode along at (dare I say it?) blazing pace.

McGavin's Kolchak is in splendid form, trying to uncover the truth, save Bond and protect himself. The only false Kolchakian note is sounded in the opening narration, which concludes with these words: "It was here that began one of the most terrifying experiences of my life." One of them, Carl? That's a statement that doesn't have much impact at this point, considering that our hero was nearly killed by a vampire in Las Vegas, an alchemist in Seattle, the Ripper, a zombie and aliens in Chicago, a vampire in Los Angeles and a werewolf on the high seas. It makes the list of terrifying moments, no doubt, but it's getting to be an awfully long list.

Speaking of Beir, the actor was the third man (with Jack Klugman and Ross Martin) on "Death Ship," the fourth-season episode of The Twilight Zone written by Richard Matheson. He also was Alan Dulain in the "Man in the Middle" episode of Thriller. And he was Steve Crandon in "The Man With the Power," a 1963 episode of The Outer Limits. Wait a minute: The Twilight Zone, Thriller, The Outer Limits and Kolchak: The Night Stalker. Now that's hitting for the cycle. He also guest starred on episodes of The Munsters, Bonanza, Maverick, Perry Mason, The Andy Griffith Show, Mission: Impossible, The Time Tunnel, The Odd Couple, Kung Fu and The Rockford Files.

David Doyle was two years away from a lucrative run on Charlie's Angels (ABC, 1976-81) as Bosley, a character created for Tom Bosley, who appears in the last episode of Kolchak: The Night Stalker ("The Sentry"). Bosley was busy playing Howard Cunningham on ABC's Happy Days (1974-84). Before his death in 1997, Doyle won a new generation of fans as the voice of Grandpa on Nickelodeon’s animated Rugrats. 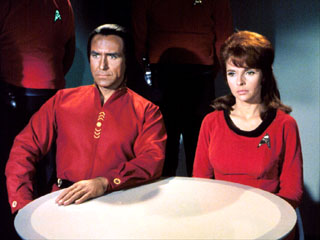 Madlyn Rhue, who plays Kolchak’s gypsy friend, is known to Star Trek fans as Marla McGivers in “Space Seed,” the 1967 episode that introduced Ricardo Montalban as Khan. She previously had appeared with Montalban in the 1960 "Day of Reckoning" episode of Bonanza.
"Firefall" was the second of four episodes (after "The Vampire" and before "The Trevi Collection" and "Demon in Lace") directed by Don Weis. Only Allen Baron directed as many ("The Ripper", "They Have Been, They Are, They Will Be . . . ", "The Werewolf" and "The Devil's Platform"). In fact, four men -- Weis, Baron, Alex Grasshoff and Dan McDougall -- directed thirteen of the twenty Kolchak episodes.

This was the first of two Kolchak scripts to bear the name Bill S. Ballinger, a writer whose credits include six episodes of Alfred Hitchcock Presents.

And it features one of the best lines Tony ever got off at Carl's expense: "Kolchak, when you get back to the swindle and fraud story, write about how you're employed here. Which is one of the biggest swindles in memory."
Sadly, though, this episode marked the last appearance of Carol Ann Susi's Monique Marmelstein. It was three episodes and out for Monique, and it took Carol Ann years to get over her dismissal from the series. She had been discovered working as a waitress at Hamburger Hamlet by Darren McGavin and his wife, Kathie Browne. They set up a reading for her at Universal. Before Carol Ann's audition for the series, the character was going to be named Allison. She also was going to be tall, blonde and graceful. McGavin convinced first producer Paul Playdon that they should hire somebody short, awkward and very Noo Yawkish. Goodbye, Allison. Hello, Monique.

Carol Ann was told that she would be a semi-regular appearing in most of the episodes. When producer Cy Chermak took over the series for Universal, however, Monique Marmelstein was eliminated from the Night Stalker mix.

But Carol Ann didn't know this at the time. She thought her acting had been judged unacceptable.

She carried around this terrible misconception for five years. She was back working as a waitress when a young writer sat down at one of her tables. The customer looked at Carol Ann and said, "I remember you. You were Monique Marmelstein.

It was David Chase, the story editor on Kolchak: The Night Stalker. Carol Ann began to apologize for being so bad on the series. Chase cheerfully set her straight.

"No, no, you were wonderful," he told her. "Everybody thought so. It just came down from the [MCA Black] Tower that they didn't like the character. They thought you were great."

"You mean it wasn’t because I did such a bad job?" she asked.

"No!" Chase answered. "You were terrific!"

Even with the years of self-doubt, Carol Ann cherishes Kolchak: The Night Stalker as "one of the best acting experiences" of her life: "Look, I was tickled to be in one of them, let alone three. It was my first job and I was twenty-two. I was Monique Marmelstein on The Night Stalker. I'm very proud I was part of that.

"I used a lot of myself for Monique. I was young. I was from New York. And like Monique, I didn’t know what I was doing. I didn’t have a clue. But I loved every minute of the show. And I loved working with Darren. He couldn' have been nicer to me. He made me feel at ease right away. The first day, he said to me, 'Do you know your lines?' I said, 'Oh, yeah.' He said, 'Good, because I don't know mine, so run them with me.' Then one day they gave us all-new lines to learn, and I panicked. Darren calmed me right down and said, 'Now don't worry, we're just going to learn them, you and I, together. It's not our fault we have new lines.' Everybody was very nice to me. They were very patient because they knew I was a complete novice.

"I only met Ruth McDevitt one time. She made a point of telling me how sorry she was that I wouldn't be on the show anymore. She said, 'I was hoping they would make you my granddaughter.' Isn’t that sweet? Simon Oakland was a sweet and gentle man. And Jack Grinnage is still a friend. So it was a great place to work."
Posted by Mark Dawidziak at 12:00 PM