Mark Dawidziak on The Trevi Collection 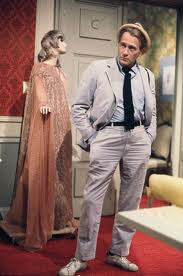 It's such an ancient pitch and maybe it's witchcraft, but this one always has charted a little higher for me -- not into the top echelon of Kolchak episodes, to be sure, but certainly landing solidly in that middle ground where the paranormal proceedings seem fresh and fun. I like the idea of turning fashion-challenged Carl loose in the world of high fashion (great comedic contrast, as Columbo learned in a few episodes). I like the way the relationship between Carl and Madelaine starts out so amiable, friendly and sympathetic. I like the creepier touches, even if some of them are done, predictably enough, on the cheap. I like Nina Foch's portrayal of Madame Trevi (and her interplay with Carl, first so snippy, then sympathetic). I like the overall balance of humor and horror as "Dying and maiming were coming into vogue in the fashion world." Well, there's just a great deal to like here.

Some of those touches go over the top, without doubt, and "The Trevi Collection" does have its share of clunky moments, as well. But if not a great episode, by any means, for me, at least, it's a thoroughly entertaining entry. It works its magic, and, full disclosure time, perhaps some of that can be chalked up to having been under the spell of Dark Shadows. 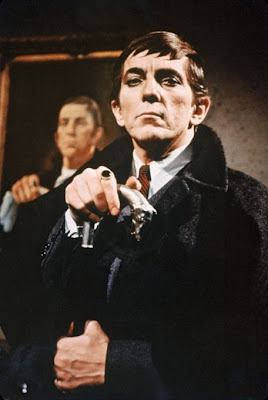 The link between Dark Shadows and Kolchak: The Night Stalker is obvious, but it's also personal. I was ten years old when Dark Shadows let Barnabas Collins out of  his coffin in April 1967, and, all of sudden, there was a vampire running around daytime television. I'd been watching monster movies for about three years at that point, so I was hooked. I explain to the students who take my Vampires on Film and Television class at Kent State University how important and pivotal a figure Barnabas is as a vampire who questions his own nature, battles against it and sets out to reclaim his soul. Here begins the wholesale humanizing of the vampire, a path that will take us deep into the books of Anne Rice, past Angel and all the way to current vampire boom of True Blood, Twilight and The Vampire Diaries. But if for every action there's a reaction, then the response to this vampire with a conscience came just nine months after Dark Shadows ended its five-year ABC run in April 1971. That, of course, would be The Night Stalker, with its snarling, animalistic, dehumanized Janos Skorzeny -- every bit as nasty as Barnabas was sympathetic. One of the many intriguing things about this is that the same producer gave us both: Dan Curtis. He gave us the sympathetic vampire, then turned right around and put the pure predator back on the horror track in the biggest way imaginable. If Barnabas and Janos could have sat down and talked over matters vampiric, that conversation might well have foreshadowed (and Dark Shadow-ed) the chats Rice cooked up for introspective Louis and the proudly predatory Lestat. 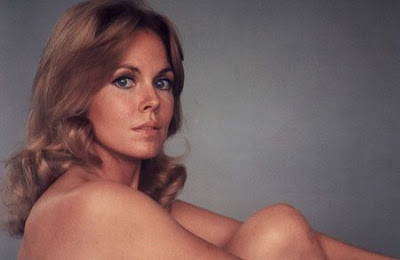 Both Dark Shadows and The Night Stalker were profound influences on my horror consciousness. And Lara Parker was an integral part of the Dark Shadows world, playing ever-scheming Angelique as a witch, a vampire and a witch again. About 22 years after "The Trevi Collection" first aired, The Night Stalker Companion was published by Pomegranate Press, a publishing company founded by Kathryn Leigh Scott, who played Maggie Evans on the very first 1966 episode of Dark Shadows and stayed with the series until September 1970. I'm standing on a stage at a midtown New York hotel, telling Dark Shadows fans, "I can't believe that Maggie Evans is my publisher." I still can't believe it. A few years after that, I was sitting between Kathryn and Lara at a horror convention, talking Dark Shadows and Kolchak with a non-stop parade of fans. So an episode that brings an essential Dark Shadows player into the Kolchak world might still have a little extra magic for me.

That much being confessed, I do have actual critical reasons for liking this particular witches brew of high fashion and low comedy. First, there is the comedy, from Carl lecturing Tony about sprucing up his wardrobe (Carl?!) to Carl's amusement over Tony having a brother-in-law named Rocco in the venetian-blind business.

Then there's the direction by Don Weis, at the helm of his third Kolchak episode (after "The Vampire" and "Firefall"). Again trying to squeeze the maximum terror out of minimalist horror effects, his production team makes eerie use of the animated mannequins by suggesting an impending attack through camera angles and slight movements.

And there's the new approach to the storytelling. Unlike most Kolchak episodes, "The Trevi Collection" plunges right into the story with Carl giving a date and time and place for the first mysterious circumstance. Usually, this information was provided after a more general opening narration that established the mood. Then Carl would launch into the date-time-place spiel. "The Trevi Collection" skips the talking-into-the-tape-recorder opening and cuts right to the chase. Nice change of pace. It's like that rare Columbo episode when the good lieutenant unexpectedly shows up in the first few minutes, and you're thinking, "Wait a minute. He's not supposed to show up for another fifteen minutes." Once in a while, it keeps you on your toes. Like that, too.

Those familiar with Night Stalking or The Night Stalker Companion know that "The Trevi Collection" was not the happiest time Parker spent on a film or TV set. The grind really was getting to everybody, including Darren McGavin. Still, having so memorably played Angelique on so many episodes of Dark Shadows, Parker was a natural choice for the role of Madelaine. "I don't think it had anything to do with me being cast," Parker said. "I auditioned for the part and got it. But I think all of the Dark Shadows fans were thrilled to see me as something supernatural. I remember Darren McGavin telling me, 'Nobody really understands the style of this thing. It has to be played seriously, and then the horror will come out naturally.' It was sort of ironic because I'd been doing that type of show for five years."

But the grueling hours, tight budgets and exhaustion had taken their toll on the cast members and production crew, so Parker wasn't walking into the jolliest of environments. This is how Lara described it for The Night Stalker Companion: "Darren McGavin was working very, very hard, so he was sort of withdrawn and not very accessible during that episode. Yes, we worked at night. And, yes, the hours were long. They'd already done more than half of the episodes at that point, and I think nerves were a little frayed around the edges. But it was a nice part, a fun part. I had my head held under water. I had purple spots all over my face while I turned into a raving maniac. I had to freak out, yelling and screaming. I'm very game. . .

but, long hours and all, he wasn’t very nice to work with. He was very short-tempered. When I’d  be yelling, he'd be saying, 'Don't do that, don't do it that way.’ He kept trying to tell me how to play a witch. It was a fun part, but, to be honest, it wasn't the most fun acting experience I ever had."

I've also interviewed Lara several times about her Dark Shadows experiences (most recently for last year's 45th anniversary of the show's premiere), and these always have been wonderfully thoughtful, candid and rich conversations. Also an accomplished author, Lara has penned such Dark Shadows novels as Angelique's Descent and The Salem Branch.

Also contributing to the episode are:
Bernie Kopell, who made appearances as the evil C.H.A.O.S. mastermind Siegfried on Get Smart. He plays a doctor. Two years after this episode, he started a lucrative nine-year cruise as the ship's doctor on The Love Boat. He also showed up in memorable episodes of The Dick Van Dyke Show, Night Gallery, The Odd Couple, The Bob Newhart Show, The Mary Tyler Moore Show and, as Dr. Frankenstien on The Ghost Busters, starring Larry Storch ("The Vampire") and Forrest Tucker.

Marvin Miller, who has one scene as the lecturer on witchcraft. He was best known as Mr. Michael Anthony, the financial representative who, for five years of The Millionaire (CBS, 1955-60), gave away a million tax-free dollars on behalf of billionaire John Beresford Tipton. Uncredited voices were a bit of specialty, ranging from Robby the Robot in Forbidden Planet (1956) to the narrator on Leslie Nielsen's lamentably short-lived Police Squad.

And, Madame Trevi herself, Nina Foch. She had the ideal preparation for a Kolchak episode. Two of her first films were The Return of the Vampire (1943), with Bela Lugosi, and Cry of the Werewolf (1944). Twenty years after her Lugosi encounter, she appeared in an episode of The Outer Limits ("The Borderland"). In 1945, she appeared in A Song to Remember, the film that marked the screen debut of young Darren McGavin. He movie credits also include An American in Paris (1951), The Ten Commandments (1956) and Spartacus (1960). After her Kolchak gig, she played Dr. Julia Moorehouse in ABC’s Shadow Chasers, a 1985-86 Ghostbusters-inspired series about two paranormal investigators (Dennis Dugan and Trevor Eve). She also has the distinction of being the very first murder victim in the very first mystery featuring Peter Falk as Lieutenant Columbo, Prescription: Murder (first aired in 1968).
Posted by Mark Dawidziak at 12:09 PM