Mark Dawidziak on The Night Stalker

This is the story behind one of the greatest vampire movies ever made. Maybe you read about it in Night Stalking, The Night Stalker Companion or Richard Matheson's Kolchak Scripts. Yes, I've certainly had my say about the impact and importance of this 1972 TV movie that pulled a staggering 33.2 rating (percentage of the nation's TV households) and 54 share (percentage of sets actually in use during the 90-minute slice of prime time when ABC aired The Night Stalker on January 11). I always pause to explain the immensity of those numbers when showing The Night Stalker to the students who take my Reviewing Film and Television class or the Vampires in Film and Television class at Kent State University. Imagine. More than half the TV sets in use that night carried flickering images of determined reporter Carl Kolchak chasing after seemingly unstoppable vampire Janos Skorzeny.

In this era of overstuffed channel lineups and endless technological choices, only Super Bowls post those kinds of ratings. The vast majority of my Kent State students can't relate to a pre-DVD, pre-DVR, pre-Netflix world with only three networks and no time shifting. So given how much I've had to say about how and why The Night Stalker works, I thought it might be fun to start this discussion by letting you know how the 18-to-22-year-old college student of today responds to this movie. The Night Stalker is the only film I show in both courses (although for greatly different reasons), and since I teach each class twice a year, I get plenty of chance to gauge their response to a 40-year-old vampire drama. 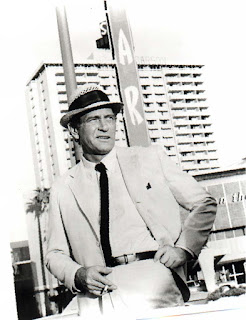 First off, the general response is one of surprise and delight. Going into my fourth year of teaching these classes, I've only had one or two students who have seen it (or even known about it). Even most of the major-league vampire fans are unfamiliar with it. So I set up the film by explaining it was made when television was a very different medium and Las Vegas a very different town. I explain the limits of television in the early 1970s. And I explain that they'll undoubtedly recognize the actor playing Carl Kolchak -- as the Old Man in A Christmas Story (eliciting smiles and chuckles all around). Then there's a brief discussion of how versatile an actor Darren McGavin was and that they need to get the Old Man out of their minds. They're about to see a younger, more vital actor playing a role forged by a different sense of humor.

It doesn't take them long to get sucked into the world of Carl Kolchak. They are hooked right from the opening narration, and they all jump as one when that hand shoots out of the dark and grabs Cheryl Ann Hughes by the neck. The film has got them by the neck, too. In The Night Stalker Companion, I wrote: "What worked then, works now. And nothing works better than what Richard Matheson described as a cinema verite approach to a vampire story." This isn't vastly different from the approach Bram Stoker took with Dracula, using diary entries, journals, newspaper clippings and letters to give us the feel of a factual record. What worked then, works now. 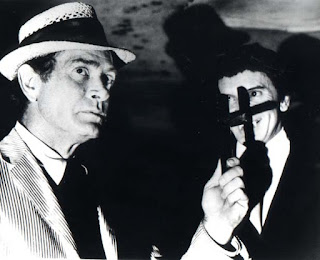 But, OK, not everything works with these 21st-century college students. Nor are they in agreement on many elements of The Night Stalker. There is near-unanimity on McGavin's portrayal of Carl Kolchak and the ingenious idea of setting a vampire story in Las Vegas. And perhaps because they are becoming increasingly mistrustful of politicians and those in power, Kolchak's struggle with the powers-that-be has great resonance for them. The ending -- Kolchak's last confrontation with Vegas officials, not the showdown with Skorzeny -- has tremendous impact for them. Most everyone also likes the pace of the film, which does move like a house-afire. And they like the suspenseful buildup to Kolchak's fight with Skorzeny (although not so much the fight itself).

The dated aspects, of course, do not go by without comment, particularly since the cleaned-up, digitalized DVD I use boasts a far sharper, clearer picture than was possible with 1972 TV sets. You're spotting things you were never meant to see. What tended to go by without notice 40 years ago looks a bit cheesy by today's standards. I'm primarily thinking of the stunt-double scenes with Skorzeny in full battle mode. Man, that sticks out like a wooden stake in a vampire's chest.

Here are three elements that tend to split the room, and they are rich topics for debate and discussion:

1.) THE MUSIC. Some just adore Robert Cobert's jazzy and unpredictably weird score. Others find it corny and, after a while, laughable (a view, by the way, expressed emphatically by Kolchak creator Jeff Rice). Myself, I've always greatly enjoyed Cobert's spooky tones, and I continue to put that to a rigorous test, re-watching The Night Stalker at least four times a year. I continue to find Cobert's theme for the movie and Gil Melle's theme for the series equally catchy.

2.) THE SUPPORTING PLAYERS. Some of my students think this is a colorful collection of intriguing characters actors. Others find the peripheral characters, excluding Simon Oakland's Tony Vincenzo, to be an unfortunate collection of stereotypes. I'm, of course, tremendously fond of the veteran character actors in The Night Stalker, starting with Kent Smith and Claude Akins. The teaming of McGavin and Oakland is nothing less than sublime, and a topic worthy of its own discussion. But there always seems to be a six degrees of separation between my books, no matter how divergent the subjects. Both Claude Akins and Larry Linville got their start at the Barter Theatre in Abingdon, Virginia. Founded during the Depression, the Barter was one of the pioneering companies in the regional theater movement. It was the subject of my first book, and Claude Akins was one of the many Barter graduates I interviewed for that one. From the 1930s to today, the Barter has been an early stopping place for some of America's greatest actors, including Hume Cronyn, Gregory Peck, Patricia Neal, Ernest Borgnine, Ned Beatty and Kevin Spacey.

3.) THE PORTRAYAL OF THE VAMPIRE. The hissing, animalistic Skorzeny also divides the students who have seen nasty vampires taken to the extremes of From Dusk Til Dawn, John Carpenter's Vampires and beyond. Nobody faults Barry Atwater, a fine actor doing his best with a 1972 concept of the vampire (keep in mind that Christopher Lee's Dracula and Frank Langella's Count also tend to split the room). He is kept in the shadows for much of the film, which works in his mysterious favor, but, when he fully emerges from the shadows, he brings with him an aspect of the TV movie that hasn't aged all that well. 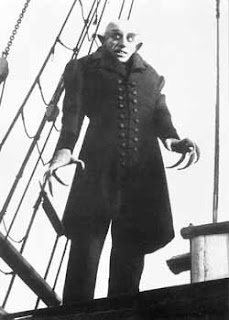 Personally, I never cease to be amazed by how much of the film holds up so well over the decades and through repeated viewings. No question that Darren McGavin's Carl Kolchak is the main attraction, but the whole "Dracula meets The Front Page" spirit that Jeff Rice crafted for the original novel remains incredibly potent. And The Night Stalker still packs a tremendous metaphoric punch. The best vampire stories reflect their decades, even if the featured vampires don't cast any reflections in a mirror. They consciously and subconsciously capture an era's fears, hopes, anxieties, dreams and nightmares. Look how much the horrors of World War I and the Spanish Influenza pandemic shaped the themes and the depiction of the vampire in Nosferatu (1922). Look how the societal undercurrents of the 1980s inform the original Fright Night and The Lost Boys. Even a minor vampire film like The Return of Dracula (1958) is packed with Red Scare paranoia (the Red Scare being a vampire instead of a communist threatening to tumble the white picket fences of an all-American small town). Jeff Rice says he was just trying to come with a good yarn, but he also came up with a vampire story metaphorically perfect for its time -- and perhaps for this time, as well. I'm guessing that's a major reason why what worked then, works now.

And making the magic work? Try the ideal star (McGavin), the ideal producer (Dark Shadows creator Dan Curtis), the ideal screenwriter (I Am Legend author and Twilight Zone contributor Richard Matheson) and the idea director (John Llewellyn Moxey). It was a fortuitous alignment of talent -- fortuitous for me, that is. I'll not be denying that. When I consider the number of friendships and opportunities that have come my way because of my association with Carl Kolchak, how could I possibly think otherwise?
Posted by Mark Dawidziak at 12:00 PM