Mark Dawidziak on Demon in Lace 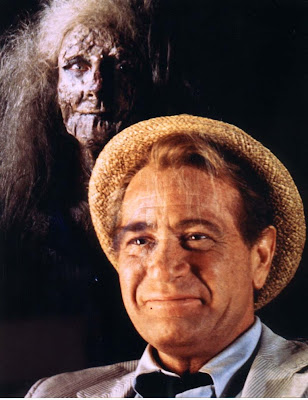 ITEM: This report is being posted later than usual because, like Carl Kolchak, I still inhabit a world of deadlines and editors and breaking stories. No, I wasn't waylaid by a Rakshasa or Peremalfait. I got sandbagged by some breaking stories on my way to "Demon in Lace," so apologies for checking in, as Bob Cratchit says to Scrooge, "behind my time." The Tony Vincenzos in my newspaper life were quite correctly wondering, "Where's that story?" Yes, those conversations really go on, just as they were depicted in The Night Stalker. Although I've never had the pleasure of delivering a newsroom line anywhere close to Carl's "Demon in Lace" exclamation: "Another vanishing corpse, Tony. I tell you, we’re in luck! It's terrific!"

ITEM: This is another episode I've always rather enjoyed, if not quite as much as "Chopper." The presence of Keenan Wynn, making his second appearance as Captain Joe Siska, also invites comparison with the previous Siska story, "The Spanish Moss Murders." Obviously, "Demon in Lace" is not in the "Spanish" class. But if not top-of-the-line Kolchak, it does have creepy moments that hit you with all the impact of a midtown succubus. I'll stick by the evaluation in The Night Stalker Companion: "Good scares. Good sense of humor. Good atmosphere. Good fun. Good episode." That pretty much sums up the succubus odyssey for me.

ITEM:  Kolchak's interaction with the guest players is great fun in this episode, from his roaring reunion with Siska to his encounters with the tuna-touting coach played by comedian Jackie Vernon and the registrar played by Morticia Addams herself (or Marsha, Queen of Diamonds, if you prefer), Carolyn Jones (whose pre-Kolchak credits included not only The Addams Family but the Vincent Price version of House of Wax and the original film version of Invasion of the Body Snatchers). Even like Carl's scenes with Kristina Holland as college newspaper reporter Rosalind Winters. Wynn's TV credits have been well documented. His many films include The Hucksters (1947), The Three Musketeers (1948), Angels in the Outfield (1951), Kiss Me Kate (1953), The Great Man (1956), Dr. Strangelove (1964), Finian’s Rainbow (1968), Nashville (1975) and Piranha (1978). Vernon, the voice of Frosty the Snowman, played the inept genie Chatterje in Rod Serling's 1971 "Make Me Laugh" segment of Night Gallery. College student Mike Thompson was an early TV role for Ben Masters, later to co-star with Kate Mulgrew (later Captain Kathryn Janeway on Star Trek: Voyager) in ABC's 1988 medical drama, Heartbeat. And Andrew Prine's post-Kolchak genre credits include episodes of Darkroom, V, Freddy's Nightmares, Star Trek: The Next Generation and Star Trek: Deep Space Nine.

ITEM: You can't write off an episode that starts with Kolchak quoting a leader of the Weimar Classicism movement: “It was Goethe who said we love girls for what they are. Well, even the great Goethe could have learned something from the tale that took place on the campus of Illinois State Tech.” You can't write off an episode with Tony revealing that in college he played drums in a group called Tony Vincenzo and his Neopolitans (in real life, Simon Oakland was an accomplished violinist). Goethe, the Neopolitans and a succubus in the same episode?

ITEM: This was the last of four episodes directed by Don Weis (following "The Vampire," "Firefall" and "The Trevi Collection"). All in all, not a bad Kolchak quartet.

ITEM: Editors screaming for more copy. Grabbing my porkpie hat and heading for the next deadline. Don't let anyone tell you, it couldn't happen here.
Posted by Mark Dawidziak at 1:07 PM