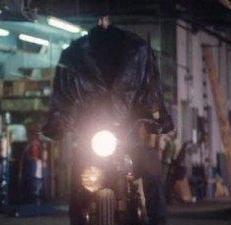 All right, we all know what's wrong with "Chopper." Producer Cy Chermak knew before the episode was done filming. Nobody needs the heads up on this one. On the show's budget, there simply was no way to make the headless motorcycle rider look like anything but a stuntman with a leather jacket pulled over his head and phoney shoulders. It looks terrible today, but, to be painfully honest, it looked pretty awful in 1975.

In today's CGI world, this biker updating of Washington Irving's Headless Horseman tale could be given the dazzling special-effects treatment. Like "The Werewolf," "Chopper" is an episode that leaves you pondering just how frighteningly effective it could be done more than thirty-five years later.

Still, if you can look past what's passing for that missing head, "Chopper" holds up very well in almost all other regards. Indeed, so much goes wonderfully right in "Chopper," both producer Cy Chermak and story editor David Chase single it out as a favorite.

"I thought it was very well written," Chermak said. "The dark humor is really something, but I hate the visual. It looked silly. Today, with digitalization, you could do that effect one, two, three."

It does, indeed, chart very high for all kinds of reasons: humor, horror, offbeat approach, guest cast. You can sense the fun everybody had with this one. Here's the section from The Night Stalker Companion about  about Bob Zemeckis becoming part of the Kolchak world:


One of the contributing writers to "Chopper" was a recent graduate of USC's School of Cinema, Robert Zemeckis. A Chicago native, Zemeckis went to Universal to observe the making of a TV series, McCloud. Then in his early twenties, Zemeckis and collaborator Robert Gale wrote a script for McCloud. They also took a whack at Kolchak.


"Bob Gale and I worked on a couple of ideas for The Night Stalker," Zemeckis recalls, "and they produced one. It was my first professional sale. So I guess you could stay it all started with Kolchak.


"We knew they needed ideas and scripts. The show had trouble because they needed a new monster every week. And after they had done a werewolf, a vampire and zombie, they said, 'Oh, no, we're running out of monsters.' So Bob and I saw this and thought, if we could create a folklore that they could plug into the series, we might get our first sale. We started out with a sort of 'Legend of Sleepy Hollow' thing, and we combined that with the '50s biker idea. And they bought it. I thought it came off very funny. They kept all the main elements of the story. The rewriting that was done was because we didn't understand the limitations of television.


"Obviously, I've always loved this kind of stuff, but that's not why we wrote 'Chopper.' We did it because we perceived this vacuum. Now I tell students, 'Don't try to sell a spec script to a hit show. They have a staff of writers and more scripts than they know what do with. Sell one to a show that's having trouble finding writers.' That was Night Stalker. If you come along with the right idea, they'll recognize that it's good for their show."


Zemeckis and Gale then sold their McCloud script. Then they sold one to Get Christie Love (ABC, 1974-75). In 1978, Zemeckis turned to directing with I Wanna Hold Your Hand. The rest of the resume speaks for itself: Used Cars (1980), Romancing the Stone (1984), the Back to the Future trilogy (1985, 1989, 1990 and shot at Universal) and Who Framed Roger Rabbit (1988). Zemeckis also has directed episodes of a series he executive produces for Home Box Office, Tales from the Crypt (a horror anthology you know Carl Kolchak would appreciate). On March 27, 1995, he walked on the stage of the Shrine Auditorium in Los Angeles to pick up his Oscar for directing Forrest Gump. The hit film also won Academy Awards for best picture, best actor (Tom Hanks), screenplay, film editing and visual effects. And it all started with a headless motorcycle rider.


"That episode was one of my favorites," David Chase. "It's typical of what the young writers, like Bob Zemeckis, would come up with. It was a ‘60s rock 'n' roll joke. It was wild -- a headless biker riding around."

Funny stuff roaring throughout "Chopper." There’s Simon Oakland, in typically wonderful form, having a belly blast with Tony’s restricted diet. Released from the hospital with a churning ulcer, Tony must try to keep his temper while keeping away from spicy food – while dealing with you-know-who. There's also that great Kolchak line, when Captain Jonas (Larry Linville) says a motorcycle rider has taken it into his head to start a killing spree: "He certainly hasn't taken it into his head, because he has no head!"


Following Stanley Adams, Linville became the second cast member from the original Night Stalker movie to make a guest appearance in an episode of the series. The supporting cast of "Chopper" represents a great deal of television history: Jim Backus (the voice of Mr. McGoo, his series ranged from I Married Joan to Gilligan's Island), Linville (Major Frank Burns on M*A*S*H), Steve Franken (Chatsworth Osborne, Jr. on The Many Loves of Dobie Gillis) and Jesse White (the original Maytag repairman in the commercials).Franken, though, was filling in for John Fiedler. Neil the morgue attendant seems to be a fun, but, let's face it, he’s no Gordy the Ghoul. Jesse White got his start as Mr. Wilson in the Broadway and film versions of Harvey. In 1956, he appeared with Henry Jones (Captain Wells in “Werewolf”) in The Bad Seed. His other notable movies include Bedtime for Bonzo (1951), Death of a Salesman (1951) and Matinee (an underrated 1993 film from director and Kolchak fan Joe Dante).
Posted by Mark Dawidziak at 12:24 PM