Spotlight on The Night Stalker 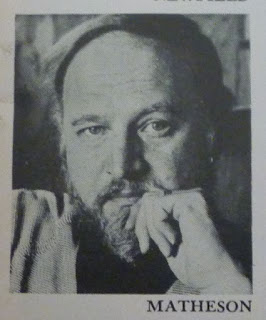 ABC’s Barry Diller could not have made a better choice to adapt Jeff Rice’s then-unpublished The Kolchak Papers into what became the original Night Stalker than Richard Matheson, who had altered the landscape of horror fiction and film forever with his 1954 novel I Am Legend.  His other vampire stories included “Dress of White Silk” (a major influence on Anne Rice) and “Blood Son,” and he would later adapt Bram Stoker’s Dracula—which, as embodied by Bela Lugosi, inspired I Am Legend—for the same producer, Dan Curtis.  Moreover, the story fit the Matheson mold in which a single outré twist is rendered more believable by otherwise rigorous realism, and a lone man faces seemingly insuperable odds, be they vampires or elected officials.

Yet as adept as Matheson was at dreaming up shrinking men, gremlins on airplane wings, and time-traveling lovers on page and screen, he was also something else:  a talented and respectful (sometimes to a fault) adapter of other people’s work.  One need only consult his film versions of, for example, Edgar Allan Poe’s “The Fall of the House of Usher” and Dennis Wheatley’s The Devil Rides Out to see how well he could tease a narrative out of what is primarily a mood-piece, or compress a sprawling saga into a fast-moving 95-minute nail-biter.  His Night Stalker teleplay demonstrates the principle Joseph Stefano conveniently “forgot” when he essentially claimed to have dreamed up Psycho all by his lonesome, i.e., an adapter is as much an artist as an author is.

Make no mistake:  Jeff Rice created Carl Kolchak, and as Matheson has acknowledged, the story of The Night Stalker is all his, with relatively few alterations in its transition from page to screen, as Rice in turn has acknowledged.  Yet it would be fair to say that Matheson created Kolchak as we know him, since Rice’s Kolchak is superstitious, fat, cowardly, and comparatively humorless, whereas Matheson’s is, well, none of those things.  While we’re giving credit where it’s due, an incalculable amount must, of necessity, go to Darren McGavin, who had previously worked with director John Llewellyn Moxey on another well-received telefilm, The Death of Me Yet, and was probably more closely associated with the role of Kolchak than any other for the rest of his life.

In fact, few screenwriters have been blessed to see their scripts enacted by casts as impressive as this one, epitomized by law-enforcement figures Ralph Meeker (Kiss Me Deadly), Claude Akins (’nuff said), Charles McGraw (The Narrow Margin), and Kent Smith (Cat People).  It’s cool to see Bernie Jenks “guzzling” Carl’s beer and realize we are watching two interpreters of Mickey Spillane’s Mike Hammer, and when you toss Elisha Cook, Jr., into the mix, you’re talking about a guy who goes back to The Maltese Falcon, The Big Sleep, House on Haunted Hill, Rosemary’s Baby, and, yes, Blacula.  Add Simon Oakland of Psycho and Barry Atwater, who appeared with Akins on The Twilight Zone in “The Monsters Are Due on Maple Street,” add plasma, and stir… 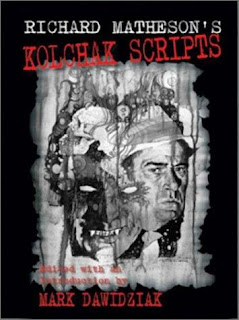 Moxey, sad to say, has been wildly inconsistent in his public attitude toward Matheson’s script, with which he expressed pleasure in Mark Dawidziak’s fine Night Stalking: A 20th Anniversary Kolchak Companion.  Years later, in a video interview for Moxey’s City of the Dead (aka Horror Hotel), he reversed course completely, claiming that he basically threw the script out and worked with others to rewrite it; I don’t have a transcript handy, but I believe Rod Serling was among the names to be invoked.  A close comparison between the finished film and the version published in Richard Matheson’s Kolchak Scripts (edited by Dawidziak) does reveal some restructuring and additional dialogue, but it seems more plausible that author Rice made those uncredited rewrites.

Moxey’s volte-face notwithstanding, his crackling direction is one of the film’s greatest assets, as is the score by Curtis’s longtime collaborator Robert Cobert, much of whose oeuvre sounds like, and probably was, leftover cues from Curtis’s Dark Shadows, which ended its five-year run just before Stalker was shot.  The result works so well because it so skillfully combines the old world and the new, staying true to classic vampire lore while relocating it to a modern milieu, enhanced by a goodly amount of location shooting and Cobert’s rat-a-tat-tat music.  This is not only among Matheson’s best scripts—high praise indeed from the author of Richard Matheson on Screen—but also, I would venture to say, one of the best genre movies made for the large or small screen.

At the uniquely cinematic age of 8½, I was too young to catch The Night Stalker’s record-setting first broadcast, which rightly received the Edgar Allan Poe and Writers Guild Awards, but I was certainly aware of its mystique, which equaled if not exceeded that of contemporaneous telefilms such as Don’t Be Afraid of the Dark and the later Curtis/Matheson Trilogy of Terror.  I’m pretty sure I didn’t see the original until after the series debuted, but by gum, that was one show I never missed, and I can still remember the tingle I got from seeing those previews.  Formulaic and silly as the show sometimes was, that tingle will never leave me, and the onscreen adventures of Carl Kolchak, taken collectively, stand up as both a nostalgic favorite and a true television landmark. 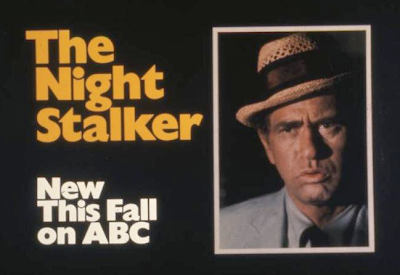 Matthew R. Bradley is the author of Richard Matheson on Screen, now in its third printing from McFarland, and the co-editor—with Stanley Wiater and Paul Stuve—of The Richard Matheson Companion

(Gauntlet, 2008), revised and updated as The Twilight and Other Zones: The Dark Worlds of Richard Matheson