Mark Dawidziak on The Devil's Platform 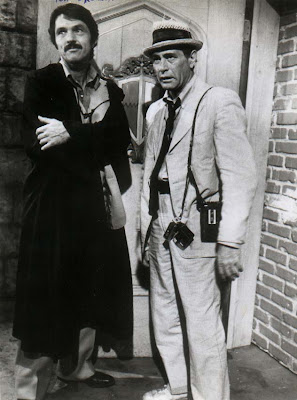 On "The Devil's Platform"? Shaky place to be standing, but we'll try to keep our footing.

One aspect of this episode has dogged me since it first aired. I have the same problem with The Omen, which hit movie screens two years later. Both used Rottweilers as the "devil dog." All right, here's the problem, and I'll cop to it being one born of personal experience: I've been in the happy company of too many terribly sweet Rottweilers. My brother has welcomed five of them into his house (the two current Rotties are Moose and Lola). They tend to be big fun-loving babies. As a kid, I delivered newspapers (yes, the whole newspaper thing started that young) for five years, and you develop a life-saving instinct with dogs -- which ones are friendly and which ones have bites as worse as their barks. I'm no Cesar Millan, but the instinct has served me well since those days delivering the Long Island Press. And despite the negative press Rottweilers suffered in the 1970s, thanks to movies like The Omen and director Curtis Harrington's Devil Dog: Hound of Hell (1978), I have consistently found that they live up to the international federation of kennel clubs' description of the breed: "good-natured, placid in basic disposition, very devoted, obedient, biddable and eager to work." That perfectly suits the Rotties I've encountered over the years, and I just can't look at "The Devil's Platform" without grinning every time the supposedly satanic pooch shows up. I have nothing but the happiest memories connected with the breed. 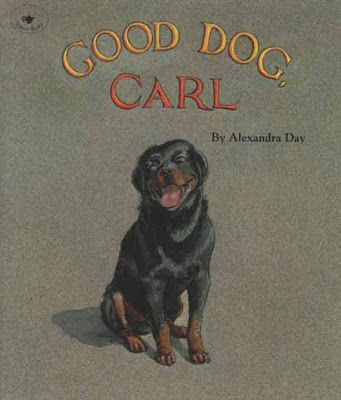 To make matters worse for this episode, the image of the Rottweiler began to radically change in the 1980s and '90s with the widespread popularity of the Good Dog, Carl picture books for children. Carl, the hero, of these books is invariably left in the care of a toddler named Madeleine. The Rottweiler went from being the devil dog to being a babysitter entrusted with the care of an adorable tot. Even if it didn't have major structural problems (and it does), "The Devil's Platform" would collapse under the weight of this change in image (and politicians can tell you how important image is to a successful campaign). My daughter was given all of the Carl books as a little girl, and she thinks Rottweilers are just the cutest things. I showed her all the Kolchak adventures last year and she greatly enjoyed them (particularly the original film), but she was crying out in delight not screaming out in terror whenever the Rottie appeared in "The Devil's Platform." You see, there was a collision between the sensibilities forged by Carl the reporter and Carl the Rottweiler, and this crash occurred at the intersection of "The Devil's Platform."

So even if I found this episode scary, I wouldn't find it scary. The evaluation from The Night Stalker Companion was as follows:

No less than six writers worked on “The Devil’s Platform,” and it shows. The problem isn’t the story, it’s the structure. Still, the episode has a certain amount of fun with a notion that the average viewer is more than willing to accept -- that a politician has sold his soul to the devil.

The episode does, indeed, wander into wonderfully deep metaphoric ground. Things should get pretty hot when you're using satanism as the basis for a political story, but "The Devil's Platform" is lukewarm at best. Now, the familiar refrain at this point is that any Kolchak episode has much to recommend it, so, here we go:

In addition to the obvious point made by having a politician in league with the devil,  the episode contains some of the series' snappiest exchanges. "You know, I once  thought of entering the priesthood," Tony says. Kolchak quickly responds: "Then the Inquisition ended and all the fun went out of it for you." Not bad, Carl.

The episode also includes some wonderful material about Kolchak's shabby pork-pie straw hat. Back from a trip to Europe, Miss Emily has brought Carl a dashing new chapeau. Clearly uncomfortable, he can't wait to switch back to his old standby (much like, in Columbo episode aired after this, "Now You See Him," the good lieutenant couldn't get comfortable with the new raincoat his wife gave him as a present). Tony is disgusted by what he calls that "bird-feeder hat."  "What don't you like about this hat?" Kolchak asks him. "What's under it," Tony responds. Not bad, Tony.

Another great Carl line: "There's two things that just can't be rushed -- anyone who is paid by the hour and an office-building elevator."

TRIVIA ITEM 1: Stanley Adams, who plays Louie the Bartender in "The Devil's Platform," became the first actor, other than Darren McGavin and Simon Oakland, to appear in the Night Stalker movie and series. He would not be the last. Larry Linville was a guest star in "Chopper." Adams, who played Cyrano Jones in the "Trouble With Tribbles" episode of Star Trek, appeared in episodes of Alfred Hitchcock Presents ("Pen Pal"), Thriller (Robert Bloch's "The Weird Tailor"), The Twilight Zone (Richard Matheson's Once Upon a Time" and Rod Serling's "Mr. Garrity and the Graves"), The Addams Family ("The Addams Family Meet the VIPs"), The Andy Griffith Show ("Deputy Otis") and Darren McGavin's Riverboat ("That Taylor Affair"). He also played Perelli in both the original Playhouse 90 and the 1962 film version of Serling's Requiem for a Heavyweight. Other films include Lilies of the Field, Breakfast at Tiffany's and Ship of Fools, but gotta love an actor who appeared in projects written by Richard Matheson, Robert Bloch and Rod Serling.

TRIVIA ITEM 2: “The Devil’s Platform” was the fourth and final episode directed by Allen Baron. He had directed four of the first seven episodes (also "The Ripper," "They Have Been, They Are, They Will Be. . . " and "The Werewolf."

TRIVIA ITEM 3: To add to the Miss Emily confusion, Ruth McDevitt is billed as Edith Cowels, but Carl calls her Emily.

TRIVIA ITEM 6: Jeanne Cooper, mother of actor Corbin Bernsen, is best known for her long run as Katherine Chancellor on the CBS daytime soap opera The Young and the Restless. She also appeared in an early episode of The Twilight Zone, "Mr. Denton on Doomsday" and a 1960 episode of Thriller, "The Big Blackout." 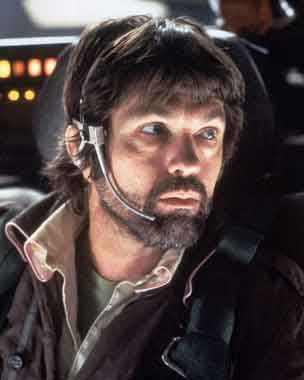 IF MEMORY SERVES: Maybe it was working with dogs. Only two actors have ever told me they couldn't remember a guest-star stint on a series. The first was Nicol Williamson, who said he couldn't remember much about playing murderer Eric Mason on the 1978 Columbo caper "How to Dial a Murder." He played a mind-control guru who conditions his pet Doberman pinschers to kill a colleague. The second was Tom Skerritt, who, of course, played Robert W. Palmer in "The Devil's Platform." Both these responses caught me by surprise, considering the time and effort it takes to make an hour or ninety minutes of prime-time entertainment. It's a week or more of your life -- learning lines, building a character, setting up shots, rehearsing, working under intense pressure. I can understand forgetting a day of voice-over work or a half-day on a commercial. But a whole week of your life (or more) flushed from the memory banks? I don't think either of these gentlemen, both of whom I've always admired as actors, were being insincere. But it was frustrating not to get more out of them. While the premise of "The Devil's Platform" may be memorable to some, it made no impression on Tom Skerritt. "I really have no memory of that show at all," said the actor who played Dallas in director Ridley Scott's Alien (1979) and Reverand Maclean in Robert Redford’s A River Runs Through It (1992). "I was doing a lot of episodic television at that time. I was very busy. I was going from one show to another, and a lot of it blurs together. I just don't remember doing that one. Sorry." Far more memorable was Skerritt’s Emmy-winning role of Jimmy Brock on Picket Fences. Other notable parts include Duke Forrest in M*A*S*H (1970), Wayne in The Turning Point (1977), the uncle in Poltergeist III (1988), Drum in Steel Magnolias (1989) and Evan Drake on NBC's Cheers. More recently, he has been seen on such prime-time shows as Brothers & Sisters, The Closer and Leverage.
Posted by Mark Dawidziak at 12:00 PM