Mark Dawidziak on The Zombie 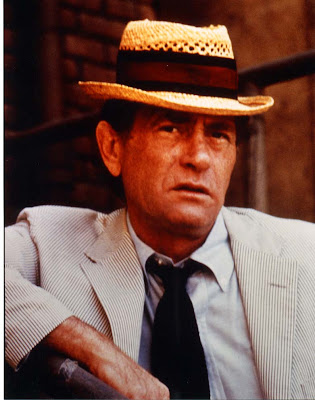 Looking back at The Night Stalker Companion, I'm a bit amused to see that I reduced the evaluation of this episode to one line: "Not a great episode, but an episode with great moments." Rewatching "The Zombie" in this era of "The Walking Dead," that verdict, brief as it is, still seems about right to me. My friend David Bianculli, the former television critic at the New York Daily News and now a professor at Rowan University, thinks this episode contains one of the scariest scenes ever presented on television. That would be the moment when Carl crawls into the back of the wrecked car, trying to pour salt into the zombie's mouth and then sewing the lips shut before it can wake up. David hardly is alone in that view. Many people have told me over the years that this scene really got to them -- and still does.

It is one of the most intense monster encounters of Carl's career, and that's saying something. And that automobile graveyard setting -- we've seen nothing like this in the Kolchak capers that have gone before it. If the familiar complaint is that The Night Strangler repeats the formula of The Night Stalker, and that "The Ripper" repeats both The Night Stalker and The Night Strangler, then give this Zekial Marko-David Chase script points for originality. The story belonged to Marko, yet it's intriguing, given the organized-crime aspect, that the future creator and executive producer of The Sopranos worked on it.

Chase was the story editor on the series. "Paul Playdon hired me as story editor," he told me. "He had read a spec script that I wrote, so we knew each other. I always liked horror movies and I loved The Night Stalker, so I was very happy to get the job."

Darren McGavin called Chase "the one continuing element through the entire show. He was there from beginning to end." And he can testify to how tough the show was to keep on track.

The episode contains many weird and wacky moments, blending, as it does, the Chicago crime stuff with the voodoo rituals. Both are broadly played, to be sure, yet the mobsters threatening to do great bodily damage to Carl are nowhere near as threatening (or scary) as Mamalois Edmonds, eerily played by Pauline Myers. Another chilling scene is the one where Carl spies on Mamalois and realizes she's preparing to send her zombie killer after him. This is frightening new wrinkle for the man in the seersucker suit. Up to know, he's gone after the killers, putting himself in harm's why by entering the lairs of Janos Skorzeny, Richard Malcolm and the Ripper. This time, the monster is coming after him. Former San Diego Chargers player Earl Faison easily suggest great power as zombie Francois Edmonds, but, for me, Myers was the one generating the real sense of terror in this episode. When "The Zombie" first aired on September 20, 1974, I was a skinny freshman at George Washington University and fairly certain that, if need be, I could outrun Francois the zombie. But I knew there would be no escaping the reach of someone like Mamalois -- unless, of course, your name was Carl Kolchak.

Carl's opening narration sets the tone: "Popular folklore would have us believe that there exists in the underworld ruthless men who fear nothing. This story should debunk that myth."

The episode is choppy and doesn't hang together as well is could, but it's also populated with a delightful array of supporting players. Indeed, "The Zombie" reminds us how well the series used its guest stars. In this hour alone, we're bumping into Scatman Crothers as Uncle Filemon, J. Pat O'Malley as the cemetery caretaker, Antonio Fargas as Sweetstick Weldon, Joseph Sirola as Benjamin Sposato, and Charles Aidman as Captain Leo Winwood, yet another police official who has worked up a special dislike for Carl: "Captain Leo Winwood and I had a relationship that was long and bloody, like the Crusades, only without the chivalry."

TRIVIA ITEM: "The Zombie" marked the first of three appearances for both morgue attendant Gordon "Gordy the Ghoul" Spangler (John Fiedler) and office intern Monique Marmelstein (Carol Ann Susi). Monique, we learn, is the niece of the INS boss in New York, Abe "the Smiling Cobra" Marmelstein. When Monique runs into the middle of a raging gun battle with her camera, Carl unceremoniously locks her in the trunk of his Mustang convertible, the Yellow Submarine. Near the end of the episode, he puts her in a cab and tells the driver to take her to Brooklyn. She makes it back to Chicago for the next episode. Gordy, we find out, is running a lottery based on the birth years of the corpses in the morgue.

TRIVIA ITEM: This is one of only two series episodes missing Jack Grinnage's Ron Updyke. The other is the series' 20th and final episode, "The Sentry."

TRIVIA ITEM: And it's the first of three episodes directed by Alex Grasshoff, who also was at the helm of the two episodes with Native American legends, "Bad Medicine" and "The Energy Eater."

David Chase, by the way, does have a fond spot in his heart for Kolchak: The Night Stalker: "There was nothing else like it on the air. We knew we were making up this bizarre joke. I hope you can tell there were some people having fun."