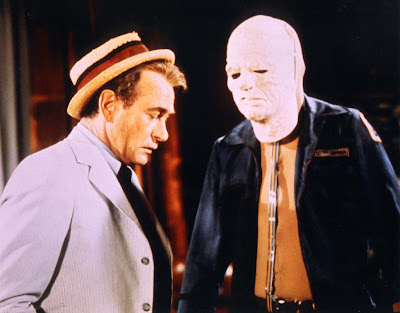 And the Kolchak roller-coaster ride continues: up ("The Spanish Moss Murders"), down ("The Energy Eater"), up ("Horror in the Heights"), down . . . did you hear somebody R.I.N.G.?

This is yet another Night Stalker episode that always leaves me with deeply ambivalent feelings. I like the basic story concept, and, yes, it certainly is one of the most X-Files-like of Kolchak's investigations. From Carl's groggy, disoriented opening narration, it's an episode positively drenched with that sense of the-truth-is-out-there, government-coverup, secrecy-gone-awry unease:

"I don't know when exactly I was in this office last. Someways, it seems like I never left. But, no, that's not right. For at least a few days I was away, far away, in the hands of men with no faces and no names. They broke me down, broke my story down, telling me how it hadn't happened the way I claimed. At least, I think that's what they did, between injections. Memories fade fast enough without chemical help, but if I don't tell this story now, I don't think I ever will.”

Great hook. I also like Darren McGavin's performance, particularly in the scenes where Carl seems the most vulnerable. With "They Have Been, They Are, They Will Be  . . .", "Firefall" and perhaps the upcoming "Primal Scream," this is at the core of episodes that seem to have had the most influence on FBI agent Fox Mulder's "trust no one" approach to staying alive, staying on track and staying on that slippery path to the truth -- a path so admirably mapped out by Carl Kolchak. This story about a robot with a powerful survival instinct and the emotional development of a child creeps along knee-deep in a paranoia. But the problem with being knee-deep in anything is that it bogs you down. It makes it difficult to move at a brisk pace, and "Mr. R.I.N.G." doesn't. It does creep, I'll give you that -- like a rusty robot lurching from step to step.

And where does this stutter-stepping lead us? To another abrupt, unsatisfying ending. There are, of course, those memorable moments: Julie Adams' hard portrayal of the hard-drinking widow Walker; the R.I.N.G. robot using mortician's wax to fashion a human face; Kolchak proclaiming, "I've got a feeling it'll make Watergate look like a pie fight."

That line truly has a resounding, uh, ring to it. The original Night Stalker movie, with its tale of a relentless reporter battling an official cover-up, so much fits the Watergate era when, with the Vietnam War winding down, trust in the government was taking a beating. Remarkably, The Night Stalker anticipates much of that, airing five months before the Watergate burglars were arrested. This episode aired five months and one day after Richard Nixon resigned the presidency.

Carl Bernstein? Carl Kolchak was there first, battling for truth, and he didn't get any Pulitzer Prizes or movie deals for his trouble. I realize we're in the realm of fantasy fiction, but how many times has fantasy fiction anticipated reality?

Yet, despite the undeniable potential inherent in this plot, "Mr. R.I.N.G." is not one of the series' stronger hours. Nice idea -- wildly uneven execution. 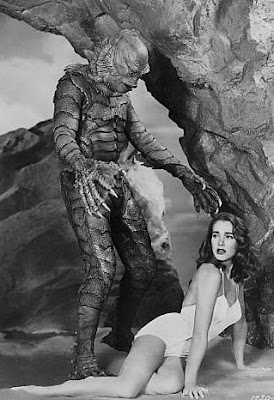 Fun, though, to see Adams in such a change-of-pace role. Her most famous genre role, of course, was Kay Lawrence, the swim-suited leading lady swept offer her feet by The Creature from the Black Lagoon in 1954. She also appeared in three episodes of Alfred Hitchcock Presents, four episodes of Perry Mason and played the title character in the "County Nurse" episode of The Andy Griffith Show (trying to give farmer Rafe Hollister his tetanus shot). Three years before this Kolchak episode, she appeared with her then-husband, Ray Danton, in "The Miracle at Camafeo," an episode of Rod Serling's Night Gallery. The same year this episode aired, she was in the horror film "Psychic Killer," directed by Danton. In 1987, she began making regular appearances as Eve Simpson on Angela Lansbury's Murder, She Wrote.

Bert Freed, who plays Captain Akins, was the first actor to play Lieutenant Columbo. Freed played the seemingly inept police detective for  "Enough Rope," a live television production of NBC's The Chevy Mystery Show.  His co-star, playing the murdering psychiatrist, was Richard Carlson, Julie Adams’ co-star in The Creature from the Black Lagoon. Writers Richard Levinson and William Link turned "Enough Rope" into the stage play Prescription: Murder, and Oscar winner Thomas Mitchell became the second Columbo. Levinson and Link then turned their play into a 1968 TV movie. That's when Peter Falk climbed into the raincoat.

Henry Beckman’s credits included two episodes of The Munsters, which, like Kolchak: The Night Stalker, was shot at Universal. He also can be spotted in two episodes of The Twilight Zone ("A Thing About Machines" and "Valley of the Shadow"), as well as Serling's classic Night Gallery episode, "They're Tearing Down Tim Riley's Bar." He later appeared in three episodes of The X-Files.

Robert Easton, who died about a month ago, also guest starred on The Munsters (as bumpkin basketball star Moose Mallory). He got his start playing country-fried rubes of dubious intellect. As Luke in the Abbott & Costello comedy Comin’ Round the Mountain, he uttered that classic line: "I'm teched. I got kicked in the head by a mule.” Escaping stereotype, Easton became Hollywood's leading dialect coach. He was called the accent coach to the stars, guiding the likes of Gregory Peck, Ben Kingsley, Drew Barrymore, John Travolta, Al Pacino, Liam Neeson and Laurence Olivier.

The supporting players were being minimized by the time "Mr. R.I.N.G." aired. Indeed, take note of how you only see Jack Grinnage's Ron Updyke in the first few minutes. He waves good-bye to Carl and says, "I'm going home to my city by the bay." And that's it. Goodbye, Ron. He's not seen again in the episode. "In the first draft of that script, Ron had a much bigger role," Grinnage said. "When we got to the final version, I was left with a line about going home to San Francisco."  But Ron's departure does set up a funny moment. Carl can’t figure out why Ron is so happy. It couldn't be a big story or a raise. What could it be? Miss Emily supplies the obvious reason for Ron's euphoria: "You're in trouble." Well, what else is new?
Posted by Mark Dawidziak at 12:00 PM