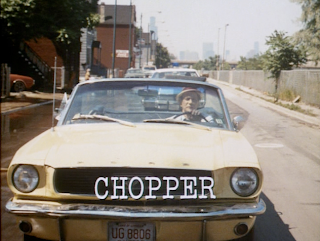 When the decapitated skull of a sword-wielding biker is separated from the rest of his body, his spirit returns in search of vengeance for the people responsible. It's up to Kolchak to pin the head on the stump, putting the ghost rider to rest once and for all.

PE: How does a bloodless show address a monster who decapitates his victims with a sword? Answer: lots of slow motion and gasping witnesses.

JS: Let's be frank. This episode has no business getting any respect. And yet, despite perhaps the most ridiculous looking monster of the week yet, it's pretty darn entertaining. 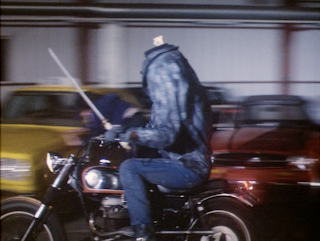 PE: It's hard to get past the shortcomings of that chopper suit. I know there was no other way in 1975 of showing a headless guy on a Harley. Obviously budget constraints also factored into talking about Chopper's favorite song, "That'll Be the Day" by Buddy Holly, but never actually playing it on the soundtrack. It's a glaring omission though once it's brought up. I would guess that, if it was in Zemeckis' original script, that's what he imagined in the finished product.

JS: The least they could have done was started with a stunt driver who wasn't six feet tall! Of course as funny as he looks, if you saw him coming down the street at you swinging a sword, you'd be freaking out, too.

PE: The first professional work credited to future Oscar-winning director Bob Zemeckis and his writing partner, Bob Gale, "Chopper" carries the same kind of dark humor that was a strong selling point of his early work like 1941 and Used Cars. It was only later in his career that he fell back on family-oriented fare like Back to the Future, Who Framed Roger Rabbit, and Forrest Gump. I'm a big fan of the early Zemeckis and Gale. 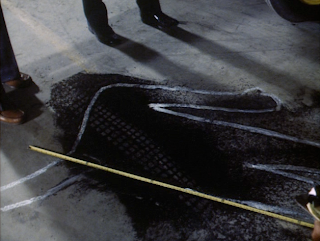 JS: I love that, for the first victim, we get a chalk outline, all shoulders, no neck or head. In case we hadn't been paying too close attention when he was smacked in the middle of the back with the sword.

PE: Carl uses his fast-working, conniving brain to extract vital information from top cop Larry Linville. I liked the scene but it seems out of place in Kolchak: The Night Stalker. Don't ask me why because I can't explain it but the sit down and gab seemed more suited to another David Chase show, The Rockford Files (I hadn't made that connection, but you're absolutely right—that was very Jim Rockford. -JS). Still an entertaining scene. Linville played a Medical Examiner in the first film. Here he's quite a bit more animated. Some of that whiny, caffeinated Frank Burns comes through now and then. 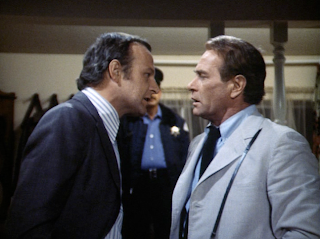 JS: Linville, who I absolutely could not stand in M*A*S*H, is great in this. He's given more to do than just yell at Kolchak; we see him deal with victims and witnesses much more compassionately. And finally, a police captain gets his just desserts!

PE: Not near enough "Tony and Carl" here. There's only one standout scene in the newsroom. Driven by a mad desire to eat (but needing to watch what he eats because of his ulcer), Tony is a little more irritable than usual. After Ron, Carl, and Miss Emily have a rambunctious discussion of beheadings while eating their lunch, Tony rips into the trio:

"Boy, you people got a lot of gall, let me tell you. You sit around here collecting your salaries and gassing about guillotines and corpses on motor scooters and stuffing your faces. This isn't a functioning newsroom! This is occupational therapy!"

The scene ends with a delivery boy (ostensibly from Matty's) coming to the newsroom, Vincenzo discreetly paying him and then the editor racing into his office, pulling the shades, as if he'd just pulled off a drug buy and was going to sample his purchase. Oakland, as usual, is comedic gold.

JS: While the time in the newsroom is limited, I think the other characters make up for it. This episode doesn't feel padded like some of the others we've seen.

PE: Why is it that whenever Carl needs to keep quiet, he drops something?

JS:  For an episode about motorcycle gangs, it sure seems like there's a dearth of motorcycles. 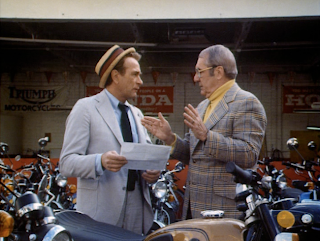 PE: Like Phil Silvers in "The Horror of the Heights," Jim Backus is woefully underused here. What's the sense of hiring these TV vets and then using them for a throwaway scene or two? Backus is actually very good here as a motorcycle salesman/WWII vet.  He conveys a deep sadness while telling Carl of his plane going down in "The Big One" and his year in a Vet hospital. You'd never know this was the guy behind Mr. Magoo and Thurston Howell the Third.

JS: Backus is great. As soon as you see him, you expect him to be a stereotypical used car dealer. So imagine my surprise to find that his scene was quite poignant.

PE: I'm not sure why Kolchak would visit a guillotine exhibit to inquire about supernatural shenanigans during the Victorian era. What does that have to do with Harold "Swordman" Baker? A lot, we come to find out, but it's a stretch that Carl got his answers from the prissy Professor Strig.

JS: Professor Strig was portrayed by Jay Robinson, who in 1976 joined the Sid & Marty Krofft family as the infamous Dr. Shrinker (which was second only to Land of the Lost in my book). 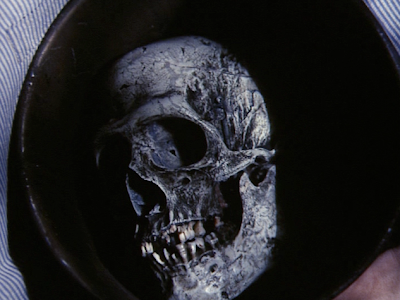 JS: The skull, when we finally see it, is a great payoff. Of course, no sooner than we get that effective shot, and we're right back to silliness as Kolchak throws a two-seam fastball at our spirit biker, reverting him to a dime store skeleton. And if you've followed our previous blogs, you'll know I'm a sucker for skeletons. 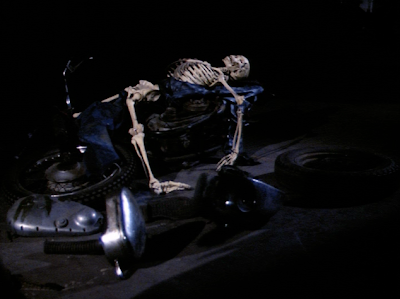 PE: Despite my usual nits, this is easily the nastiest Kolchak yet. It moves quickly, with not too many dead spots, and elevates itself high above the silly sight of a guy with a six-foot midsection and an itty bitty stump atop his shoulders. The memories I have are of a thirteen year-old watching this on the edge of his couch, not minding (or possibly not noticing) the bad spfx. I was, after all, the same kid staying up late to watch The Giant Claw and Monster on the Campus.

Next up... Kolchak faces the Demon in Lace!
Posted by Peter Enfantino at 6:00 AM