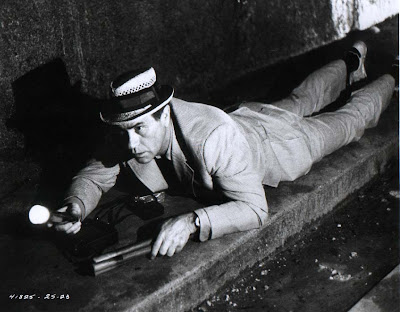 "Primal Scream" is a scream . . . if you can disregard the supernatural stuff and just appreciate it for the considerable comedic content. The humor always could get quite antic (and sometimes delightfully juvenile) on Kolchak: The Night Stalker, but in no other episode does the humor so far outdistance the horror (of which there is very little in this lackluster episode about a prehistoric apelike creature with a voracious appetite for human flesh).

Although there was (and still is) some subversive metaphoric delight in seeing an oil conglomerate being cast as the real monster, unwittingly unleashing a disaster claiming human life (hmmmm), this is a Kolchak caper where the usual blend of humor and horror is terribly out of whack. By the time they got to the thirteenth episode, so much of the monster-of-the-week formula stuff seemed wearily familiar. The ending in the tunnels, even though the reddish flares are a nice visual touch, is reminiscent of the Peremalfait showdown in "The Spanish Moss Murders." Katharine Woodville's Helen Lynch is reminiscent of Corrine Michaels' Leslie Dwyer, just seen in "Mr. R.I.N.G." John Marley's Captain Maurice Molnar is reminiscent of so many of his growling police predecessors. And there's no real explanation given of why cells from the Ice Age would start to "exhibit biological functions," rapidly reproduce and form into a half-man, half-gorilla beast. Where's the Jurassic Park moment when the whole pseudo-scientific concept is explained in a half-way plausible manner?

The germ of this idea, by the way, was in a Time magazine article that caught Darren McGavin's fancy when the series was in its earliest planning stages. Written by story editor Chase and Bill S. Ballinger (who had received solo credit on "Firefall"), "Primal Sceam" had its origins in a suggestion made by McGavin. Even before Paul Playdon was signed on as the first producer, McGavin was on a plane to Australia when he read the Time piece about core samples being taken from Antarctic ice. The samples contained amoebas thousands of years old and still alive. When asked by reporters at the first Kolchak press conference about story ideas, McGavin said they might do one about a hospital built over an Indian burial ground ["Bad Medicine”] and another "on live amoebas dating back five or six million years, and dug out of an Antarctic drilling."

They did that drilling story, all right, but they didn't dig too deep for a great horror idea. They compensated with humor, and, to be totally fair, the humor works quite well throughout "Primal Scream." It's worth sticking around just for the laughs, even if you suspect about halfway through that the writers and actors are just having way too much fun.

Case in point: the whimsical inside-the-cemetery jokes. One of the creature's victims is watching a Universal horror film with the Mummy. Another victim is truck driver William Pratt. Boris Karloff's real name, of course, was William Henry Pratt and he had indeed worked as a truck driver before making it as actor. While playful, these in-jokes also remind us that the Kolchak home studio, Universal, was the Hollywood lot that gave us Lugosi's Dracula and Karloff's Frankenstein and, yes, all those Mummy pictures.


Easly the most playful scene, however, is the one in which the ever-serious Ron Updyke (Jack Grinnage) tells Carl and Tony a very somber story about a terrible accident, ending with the line about a piecost. Finally, Tony takes the bait. "What's a piecost?" he asks. "About eighty-nine cents," Ron answers, prompting Carl to break up and Tony to dub him "Harry High School." The real culprit here, though, was story editor David Chase.


"I heard that joke in the second grade," Chase said. "I just threw it in. It's this little moment of absurdity. I mean, why is this reporter telling a grammar-school joke? I always sort of looked at the INS newsroom as a family, with Tony as the bellowing father. Kolchak became the naughty boy, always a little out of place. Ron was the good boy. Emily was the favorite aunt or sweet grandmother."


Any fan of Chase's The Sopranos knows how much Chase loves these absurd little moments of humor. It's like that lunatic season-four discussion when, pondering world disasters, Bobby Baccilieri tells mob boss Tony Soprano that, "Quasimodo predicted all of this . . . All these problems, the middle east. The end o' the world." A disgusted Tony tells him that he means Nostradamus: "Quasimodo is the hunchback of Notre Dame . . . Nostradamus and Notre Dame, that's two different things completely." But Bobby persists, pointing out that you also have the halfback of Notre Dame: "I'm just sayin'. It's interesting, the coincidence. What, you're gonna tell me you never pondered that?"


You get these kind of oddball diversions in Kolchak and The Sopranos.


Jack Grinnage also singles out the piecost joke as a favorite moment: “Darren, Simon Oakland and I had so much fun with that scene. We just laughed so hard after finishing that."


And the jokes keep flying. When Kolchak smells something like mildew, Marley's Captain Molnar suggests it's his undershirt. "Maybe it's your jokes,” Carl shoots back.


Even Kolchak's usual dire warning is laced with humor: "Now you saw that thing and I saw it, and that was not just any ape. I mean, that wasn’t just J. Fred Muggs out there, dressed in a tutu and drooling for the public and playing on a unicycle. That was some creature!"


Another comic highlight is Jamie Farr, who already had made a name for himself as cross-dressing Corporal Maxwell Klinger on M*A*S*H, as a disgruntled high school biology teacher.


Speaking of sitcom actors, a month before this episode aired, Pat Harrington started his nine-year run as Schneider the super on One Day at a Time. Already a TV veteran, Harrington was a member of Steve Allen's resident company.


And even though Captain Molnar is cut from a familiar mold, John Marley makes him distinctive because, well, he's John Marley: Dr. Tony Romano in the "Guilty Men" episode of Thriller, Dr. Sigmund Hindeman in the "Man With the Power" episode of "The Outer Limits," a supporting player in two episodes of The Twilight Zone ("Kick the Can" and "The Old Man in the Cave"), Frankie Ballou in Cat Ballou (1965), Ali MacGraw’s father in Love Story (1970) and Jack Woltz in The Godfather (1972).
Posted by Mark Dawidziak at 12:00 PM