Episode 11: Horror in the Heights 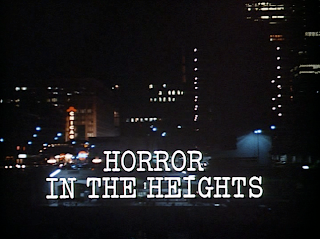 Episode 11: Horror in the Heights aka The Rakshasa

Kolchak is convinced that the Rakshasa, an evil spirit, is loose in Roosevelt Heights and killing off the town's elderly residents by disguising itself as someone its victim will trust. Carl quickly realizes that it's a good time to be someone who trusts no one. 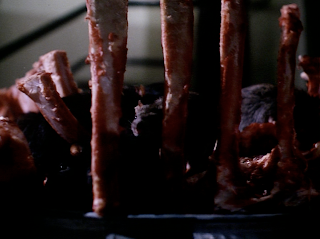 PE: Wow! They can show that nasty opening scene involving discarded animal bones and rats at a meat-packing plant but absolutely no blood on the body of a werewolf victim? That crew down at Television Standards were a screwed up bunch.

JS: It makes for a great opening sequence, particularly with the rats gnawing on the meaty bones. I can only imagine what that set smelled like.

Ron: You know, in the year 1066, the Saxons lost the Battle of Hastings because their crossbows were no match for the Norman longbows in terms of range and accuracy, and in that way two disparate cultures were melded.
Tony (long pause, looks at Carl): Y'know Ron, in your own quiet way, you're... (pauses) well, thank you, thank you very much, Ron.

and later, after Ron and Kolchak leave his office, he sighs and plops down into his desk chair and utters the single funniest line so far in the series:

Tony: Indian Swastikas, Norman conquest. Am I supposed to see God's design in all this?

JS: What a nice surprise to have Phil Silvers wander through the episode. I thought he was going to be a major character, so when he meets his, um, The Rakshasa, it came as a surprise.

PE: It's a shame we don't get more Phil Silvers here. He's dispatched fairly quickly. Silvers kept me up every night when I was in my early teens. A local station (KTVU, Channel 2, from Oakland) used to run The Phil Silvers Show (advertised as The Sgt Bilko Show) at 11 pm every night and I'd stay up religiously to watch it. Haaaaaay-up! They don't make 'em like that anymore. 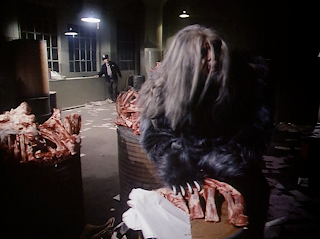 JS: Those early glimpses of The Rakshasa certainly piqued my interest. Is it a yeti? A werewolf? An unshaven Ernest Borgnine? Who was that hairy man? I'm assuming if it were Richard Kiel (which would put him in four in a row!), he would have received a screen credit.

PE: That's a genuinely creepy scene with the two cops in the alley. One sees Sergeant DeVito while the other sees his mother. "Mom?" the cop asks, incredulously. "What d'ya mean, your mother? That's Sgt. DeVito" his partner corrects him.

JS: Agreed. That was more frightening in that the audience knows that a nasty monster is lurking beyond the facade. Very effective. 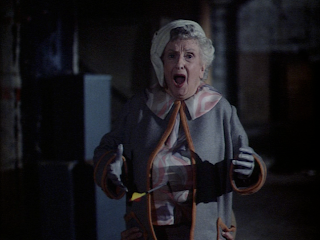 PE: The climactic scene, where Carl must decide if the little old lady in front of him is sweet Miss Emily or the flesh-munching Rakshasa, seems to be a bit of a cheat to me. In the previous scenes, the monster doesn't speak as the person it's imitating, it just sort of grunts. With Emily, it's doing a full impersonation. Carl chooses well though and shoots the thing in the gut. I think the make-up department might have been able to find a more realistic way of rigging up Ruth McDevitt for the shot. She could pass for six months along.

JS: I thought exactly the same thing. Not only was the Rakshasa silent in the earlier appearances, it seemed to specifically avoid speaking to the others, which comes across as a limitation of the creature when in disguise. And yet here we get a lengthy soliloquy. Sad thing is, this major inconsistency could have been avoided with a few lines of dialogue before any of the other murders. I guess giving one more actor a line, and a screen credit, was more than the budget could bear. 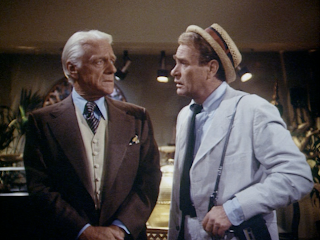 PE: We ran into Murray Matheson twice at the Thriller blog, as the snooty title character in "The Poisoner" and in one of the worst Thrillers ever, "Letter to a Lover." He could have just walked off that Poisoner set here as he's just as British, as Lane Marriot, as he was back in 1961. He's trying on a very Frasier-esque pun on a couple of browsers in his Indian museum: "I like to say, that the third century is when the Kali flowered." In his scene with Marriott, Kolchak does his best Inspector Clouseau impersonation, breaking expensive clocks and getting on the curator's nerves. After inquiring about the Rakshasa, Carl explains that the old Hindu had taken a shot at him with a crossbow. Marriott comes back with "The chap's action seems understandable to me, somehow."

JS: I found Matheson to be a fun addition to the episode. He's the perfect choice to portray a snooty antiques dealer.

PE: Abraham Sofaer is probably best remembered by genre fans as one of the aliens in black eye make-up and propeller beanie in the wildly over-rated "Demon with a Glass Hand" episode of Outer Limits. Sofaer also appeared in a couple of Thrillers: "The Weird Tailor" and "The Prediction." Ali Lakshmi was his last role.

JS: It was nice to see Miss Emily given a little more dimension this time out (as herself and The Rakshasa). I'm convinced that her detective novel would have been of the hard-boiled variety, and not some cozy mystery. She also gets a great line when Vincenzo declares that the old folks are senile.


Miss Emily: Just a minute! You may be my employer, but you're walking on eggs when you talk that way, buster!

Which is followed by Vincenzo walking out on Carl, who calls after him in a humorous role reversal.

PE: If not at the top, this episode is near the top of every "Best Kolchak" list I've ever seen (I'm sure some of the die-hard fanatics have compiled a Top Twenty Episodes list!). It's got tons of atmosphere and a decent boogeyman and a scripter to make any horror fan do a double take. Jimmy Sangster?! Writer of Curse of Frankenstein, Horror of Dracula, The Mummy, X The Unknown, and countless other Hammer classics? If anyone could bring a breath of fresh air to a monster-of-the-week format, it would be Sangster. 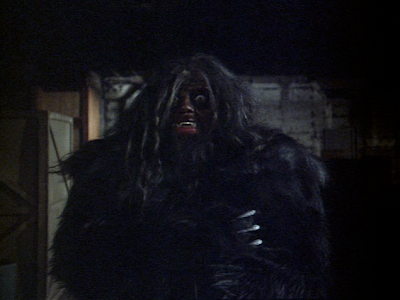 JS: While the build-up was there, I felt the climax was a disappointment. We've already discussed the Miss Emily cheat, and when we finally get our full-on shot of the monster (looking like a cross between Wolfman Jack and Rob Zombie), I'd like to think we earned a protracted, violent death scene. Instead, we get 'ouch!' and it falls out of frame. Dead. Are we to understand that it disappeared? Did Kolchak finally have physical proof to back up one of his wild stories? I was quite surprised that it wasn't even addressed in an off-hand fashion as Carl records his story wrap-up.