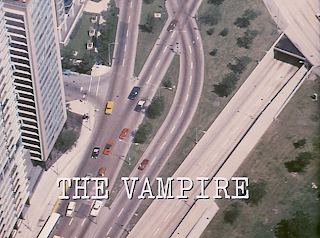 A series of vampire-like murders in Los Angeles convinces Carl Kolchak that maybe not all of Janos Skorzeny's victims were discovered back in Las Vegas. Tricking Tony into sending him to L.A. for a transcendental meditation story, Carl instead uncovers his latest monster: Catherine Rawlins, the vampiress! With the help of Faye Kruger, a real estate agent with dreams of being a journalist, Kolchak convinces his editor that he's writing his piece on the guru while secretly tracking down Catherine.

PE: A brilliant idea, tying the show in to the original tele-film by bringing back one of Janos Skorzeny's victims. My only questions would be what took her so long to rise from her grave and why did she immigrate west to L.A. Interesting that the Skorzeny name is never brought up. Indeed, not much conversation at all about the case that got Kolchak run out of Vegas. 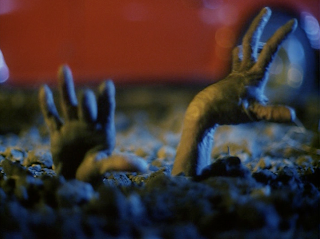 JS: Things get off to a great start with those hands reaching out of the ground. This episode must have been a real nightmare-inducer for kids in October of 74!

PE: Larry Storch is really good here, acting against type as "The Swede," a calm, reserved reporter buddy of Carl's from Vegas, rather than the usual Jerry Lewis clone we've come to expect from the actor. That bowtie has got to go though. 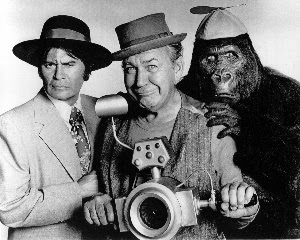 JS: I was excited to see Storch in the credits, but to be honest, was disappointed that he had such a fleeting role. I guess I'll have to wait for our Ghost Busters A Day blog to get my Larry Storch fix.

PE: After a one-episode hiatus, the fun is back in the Carl-Tony relationship. I'll wager that's due to writer Chase. Kolchak's faux stubbornness when Vincenzo orders him to go to Los Angeles to cover the marriage of a fifteen year-old guru (which is exactly where our reporter wants to go) is hilarious and infused with the kind of comic timing that made their interactions in the first two episodes so entertaining. At one point, after checking into his Hollywood hotel, Carl picks up the phone and asks the operator to connect him with his mother... Mr. Antonio Vincenzo.

JS: You know that I hate to admit when you're right about something, but you hit the nail on the head. The LA assignment scene is one of the best yet between Kolchak and Vincenzo, and kudos to Jack Grinnage who, as Updyke, has to play witness to the verbal sparring without getting a word in edgewise.

PE: Other than to have a female presence, I see no reason why realtor Faye Kruger was brought into the story and further, no reason for Carl to drag her along. Kolchak works better as a loner. I do concede that having Faye write the story on the guru while Carl hunts down the vampiress leads to a very funny bit when she wires the story to Tony. The editor, assuming Kolchak wrote the story, wants to know why it reads more like a listing than an expose:

Tony: Does his mansion really have copper pipes throughout?
Kolchak (puzzled, looking at Faye): Copper pipes throughout?
Tony (shouting now): Yes, plumbing... plumbing!
Kolchak (shifting through Faye's papers): Well, yes, Tony, some of these mansions do have... copper pipes!
Tony (sarcastically): Fascinating! And they also have low maintenance grounds, Spanish tile roof, and a separate adobe cabana?
Kolchak: Yeah, yeah, that's what it says, Tony. I thought it was very interesting.
Tony: I thought I had my wires crossed with Better Homes and Gardens!

JS: To me, she came across as a poor man's Ann-Margret. I guess they felt they needed her to explain how he could find the house for the climax, but even that doesn't justify how much screen time she receives.

PE: It was only a matter of time before William Daniels (an actor I always confuse with Harlan Ellison for some reason) climbed aboard the Head Honcho Cop Carousel. Known primarily for his concurrent roles as Dr. Mark Craig on St. Elsewhere and as the voice of K.I.T.T., the talking car on Knight Rider, Daniels, for me, has always exuded that perfect balance of menace and authority.

JS: I thought he was another great character actor just perfect for the role. I also have to say, I thought it was nice having an episode set in L.A., giving us a bit of a Hollywood travelogue.

PE: For those of us lucky enough to have frequented the city of stars, Carl Kolchak (or actually David Chase?) sums it up nicely: 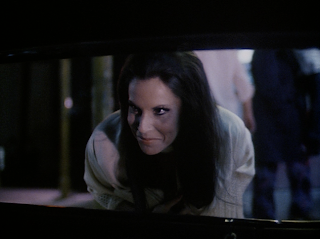 JS: Let's talk about the real star of the episode, Suzanne Charney as Catherine Rawlins. From the moment we first see her, leaning into the car window with the slightest grin on her face, I knew someone was in for trouble. Of course, I felt that lessened the impact of the next scene, when the filmmakers would have us believe that she's being attacked by a male vampire—only to turn the tables on the audience. It was a clever twist; I just felt her true nature had already been telegraphed.

PE: Catherine Rawlins makes for a great vampire, evoking the classic Hammer femmes like Ingrid Pitt (The Vampire Lovers)  and Andree Melly (The Brides of Dracula). A little too much of the "dancing vampire" bit at times (complete with gnarled Lugosi hands) but it doesn't ruin the mood. It helps that Charney wasn't saddled with bad fangs (or worse, no fangs at all). Those chompers look real to me. (Frighteningly enough, her other credits include Vasectomy: A Delicate Matter. -JS) Much more realistic than the "football players" that the monster throws through a window. You can very clearly see one of the stuntmen get a running start and leap through the plate glass. 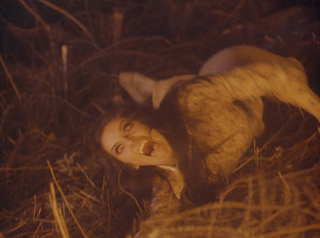 JS: What made Rawlins particularly scary, aside from her apparent ability to unhinge her lower jaw at will, was all of the hissing. I wasn't seeing her as a lovely Hammer vampire like you were. To me, she triggered memories of the female vampires from Blacula and Salem's Lot that freaked me out me as a kid. If I had seen this when it originally aired, I would have found her far more terrifying than Skorzeny in the original TV movie.

PE: Nice climax, filmed up at the Cahuenga cross.

JS: It's a great scene, with a fantastic parting shot of Kolchak and Lieutenant Matteo standing over the staked body with the burning cross in the background. 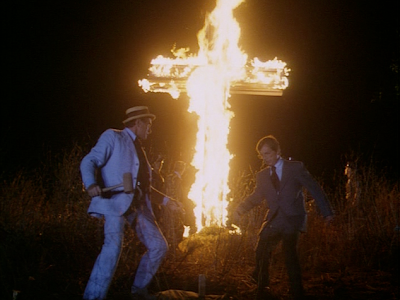 Next up... Kolchak faces The Werewolf!
Posted by Peter Enfantino at 6:00 AM