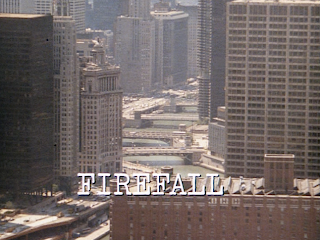 Famed conductor Ryder Bond unwittingly creates a doppleganger when he cuts off a funeral procession. Suddenly, everyone he knows is going up in smoke. The doppleganger is coming for Bond, not to mention the pesky Carl Kolchak that keeps getting in his way.

PE: Firefall was one of my favorite rock groups of the 1970s (who can forget Just Remember I Love You, You Are the Woman, and Strange Way?) so I was itchin' to see what could be done with a quintet from Colorado and a Chicago monster magnet. Maybe the drummer sells his soul to the devil to slap the skins like Keith Moon?  Alas, I was way off base.

JS: I will never understand how you survived the 70s. PE: Right off the bat, I liked this episode. It's so unlike the first five in that the structure is wonky. Sure, there's the obligatory opening shot of Kolchak sitting somewhere telling us we're never going to believe what he just saw, but then it goes from a gangland killing to a maestro cutting off a hearse in traffic to a spontaneous combustion (albeit done with $1.95 worth of special effects). Where the hell is this thing going and can it possibly tie all these threads together? Not quite...

JS: Who would have guessed that cutting off a funeral procession could lead to the creation of a doppleganger that would proceed to burn up everyone you know on its way to getting to you. While Ballinger does his best to tie the pieces together, it's a bit convoluted to say the least. What are the odds that Bond (who wasn't even driving the car!) cut off Frankie Markoff's hearse. And that Frankie was a music fan. And that we'd be debating this all almost 40 years later. But I will say this - I thought the first burnt toast victim was very effective. 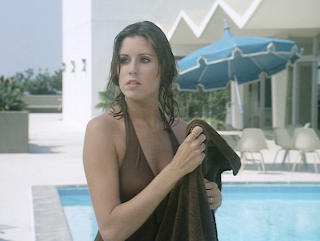 PE: Biggest problem with this episode is the paltry two minute screen time afforded Patricia Estrin as "international music groupie" Felicia Porter. Why couldn't this 11 on a scale of 10 been given a "Kolchak's new friend" role so that we could freeze-frame more of her? I know I've complained about the formula of Carl's gal pals but I would have been willing to forego my criticisms for Ms. Estrin.  If classical musicians really had groupies that looked like this, I'd have learned the cello in high school. Her death must have been particularly nasty as it elicited one of the worst screen screams I've witnessed. I wonder if the censors were coming down on this show at the time and that's why all we got was a big black cloud and a faint glimpse of... a pile of charred toast?

JS: Estrin was certainly spontaneous combustion-hot, the likes of which we haven't seen thus far in this series. And Peter, you'll be pleased to know that she went on to become a high school teacher in Woodland Hills, CA (which, as Mister Bradley will point out, is Richard Matheson's neighborhood). She also appeared in Act of Vengeance (aka Rape Squad), which came out a few months before this episode aired.

PE: Well, then, it's high time I finished high school! Another actress woefully underused this episode is Carol Ann Susi, in her final appearance as Monique Marmelstein. There are a couple of throwaway scenes and not a whit of Marmelstein humor. But the humor's kept to a minimum in the entire episode. This is just about the most unfunny Kolchak yet. No standout debates between Kolchak and Vincenzo either.

JS: As a consolation, Ron Updyke is finally given a little bit more to do this time out.

PE: The only LOL-exchange you'll get is this one:

Updyke: I played the french horn
Kolchak: I would have guessed that.

JS: What, no love for the guy who watched Estrin burn? "I was in Nam. I never saw anything that bad." Or how about Maria, the fortune teller's, "Terrible to be broke and superstitious at the same time." I have to admit that I was a little disappointed to find out that Maria is not going to be a recurring character.

PE: Kolchak seems to be in quite a jam when Ryder Bond's doppelganger traps Carl in a burning room. The reporter's way out? He opens the door and steps out of the room. It's revealed later that Bond's shadow is a 1970s answer to Freddy Krueger, a demon that can only kill you when you're asleep (but what about the guy who combusted while driving? And Felicia couldn't have fallen asleep that quickly!). 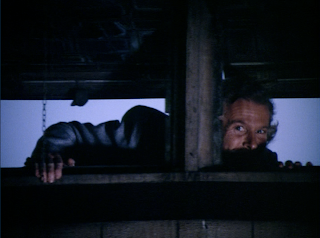 JS: Yeah, I wasn't quite clear why he started burning things around Kolchak, rather than Kolchak himself. And while I wasn't particularly fond of the double-exposure effects, I thought the bit of the doppleganger in the church windows was quite creepy.

PE: Yep. The best bit with the doppelganger is in the church scene where the evil spirit keeps pulling a Kilroy up in a high window. Only Ryder Bond can see his spittin' image up there though, so the cops think he's gone nuts. The faux Bond looks more like a mischievous child than a combustion-happy devil. I thought the writer might tie in that evil child-like grin with Frankie Markoff's arsonist son but Ballinger went a different, not altogether satisfying, route.

JS: While I have no problem suspending my disbelief about the kinds of things Kolchak experiences, I had a hard time with his (whilst completely sleep deprived, mind-you) single-handed exhumation of Frankie's body in relatively short order.

PE: Latest police head honcho Sergeant Mayer (played by Philip Carey, who once was a "Man in the Cage") wouldn't be picked out of a line-up of "well-developed Kolchak adversaries." He has none of the forcefulness of William Daniels or even Sea Captain Wells, giving Carl only a few half-hearted "Kolchak!"s and even sitting in a church pew with Carl and Ryder. Would Claude Akins have shown so much patience? I think not.

JS: I actually liked the fact that Kolchak was able to take a cop head-on for a change—Mayer never seems to get the upper hand. And it's always nice to see David Doyle, who most people probably associate with Charlie's Angels, but I always remember as the Vincenzo-like newspaper editor to Elliot Gould's Kolchak-like reporter in Peter Hyam's excellent conspiracy thriller Capricorn One.

PE: I give this one an extra typewriter for busting out of the formula but it's not a very stimulating experiment. It's telling that I don't remember ever seeing this episode (and I did see every one of them on first run) as it would have put me to bed early on a Friday night.

JS: I also enjoyed seeing the 70s-era arcade full of pinball and other electro-mechanical games that even I can remember from the years before the Space Invaders landed... 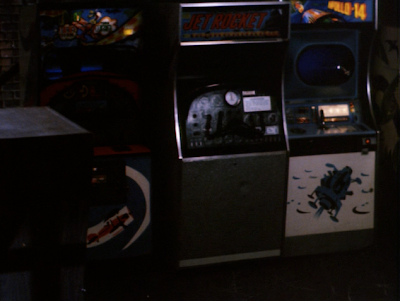 JS: I also wanted to point out that Jerry Fielding, who scored this as well as the last episode, was a noticeable improvement over Gil Mellé.

Next up... Kolchak faces a disciple of The Devil!
Posted by Peter Enfantino at 6:00 AM