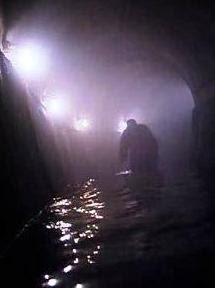 No question, one of my all-time favorite episodes. I've been pretty much on the record for more than twenty years, proclaiming often that this is second only to "Horror in the Heights" in terms of quality and, not coincidentally, my affections. For the first time on the series, the supernatural concept is fresh and the execution as funny as it is frightening. On so many levels, I continue to take great delight in "The Spanish Moss Murders." This is what I first wrote about the episode for Night Stalking (1991), and time and repeated viewings have not altered that opinion:

The balanced mixture of suspense, atmosphere, terror and comedy makes this episode one of the series' finest outings. Only "Horror in the Heights" was a better realization of Kolchak: The Night Stalker could have been on a weekly (not weakly) basis.

Much to love here:
Love the whole notion of a nightmare monster who can live independently of the dream. Fresh ideas and fresh takes on familiar ideas are hen's teeth in the horror field (like a great clue in the mystery field). The dream-scape horror story is quite common today, but not so much in 1974 (although there are certainly echoes of it in some classic short stories and in episodes of fantasy anthology shows). Combining that notion with the Peremalfait bogeyman with the dream stuff was as as imaginative as it was unnerving.

Love the whole interplay between Kolchak and Keenan Wynn's Captain Joe "Mad Dog" Siska, and how Carl gets under his skin and systematically destroys his mighty attempts to control a fiery temper. Wynn, one of Hollywood's best character actors, has several wonderful scenes as the frustrated police officer barely controlling his rage at Kolchak. Gotta love the exchange when Siska finally blows sky high. "Whatever happened to I'm okay, you're okay?" Carl asks the enraged police captain. "Well, to tell you the truth, you're not okay," Siska shouts back. "The people in group therapy didn't tell me I was ever going to meet anybody as un-okay as you are." They knew they had something with the teaming of McGavin and Wynn. They brought Wynn back for a second appearance as Siska in "Demon in Lace." Wynn, of course, had appeared, with his father, Ed Wynn, in the original TV production of Rod Serling's Requiem for a Heavyweight. And he was the writer in “A World of His Own,” the delightful 1960 Twilight Zone episode penned by Richard Matheson and ending the show's first season. In 1958, he played a compulsive gambler in “A Dip in the Pool,” a classic Alfred Hitchcock Presents episode based on a Roald Dahl story.

Love Carl's eerie opening narration, also one of the series' best, perfectly delivered by McGavin: "Maybe you have to brush with death before you can really reflect on life -- on the people and times that really meant something to you, like childhood, dreams of sailing on silver seas and wooden shoes, visions of sugar plums dancing. Silver seas, sugar plums. The visions, the nightmares of a child are perhaps the most frightening and horrifying . . . Some people who were in Chicago during the first stifling hot weeks of July would say that were so . . . if they were still alive."

Love the entire supporting cast, from Wynn and Severn Darden (terrific as the persnickety Dr. Aaron Pollack) to Virginia Gregg and Johnny Silver as Pepe LaRue (Morris Shapiro). Gregg's long list of TV credits included episodes of Dragnet, The Twilight Zone, Alfred Hitchcock Presents, The Addams Family and Mission: Impossible. Darden appeared in such films as They Shoot Horses, Don’t They (1970), Conquest of the Planet of the Apes (1972), Battle for the Planet of the Apes (1973), The Day of the Dolphin (1973), Saturday the 14th (1981), Real Genius (1985) and Back to School (1986); he also was a regular on the short-lived 1980 science-fiction series, Beyond Westworld (1980). And Silver, who can be spotted in fifteen episodes of The Dick Van Dyke Show and two episodes of The Munsters, was Benny Southstreet (with Stubby Kaye as one of Nathan Detroit's singing sidekicks) in both the original Broadway production of Guys and Dolls and the 1955 film version. The byplay between McGavin and Silver is so much fun, you really feel for Pepe when he gets swamped by Peremalfait. One other supporting player of note: Ned Glass, who makes his first appearance as Joe, the apartment superintendent. He reprises the role two episodes later in "Horror in the Heights," meaning Glass appeared in what may be the two series' two best episodes.

Love the way the whole episode hangs together, beautifully paced by director Gordon Hessler and producer Cy Chermak's team. Hessler actually was a Kolchak director with a list of creepy credits on his resume. He was a story editor and associate producer on Alfred Hitchcock Presents. He directed an episode of Tales of the Unexpected. And his films included The Oblong Box (1969), Scream and Scream Again (1970), Cry of the Banshee (1970) and Murders in the Rue Morgue (1971).

Love the snappy dialogue in this one. Simon Oakland gets a beaut when Carl show Tony a fuzzy picture of the bayou monster: "What is that, Salvador Dali's bar mitzvah picture?" And they give Carl, of all people, the line, "There's nothing under the sun that I fear as much as I fear dentist appointments."

If four typewriters is our top rating, I'd give the full four to "Horror in the Heights" and three and a half to this one.
Posted by Mark Dawidziak at 12:00 PM