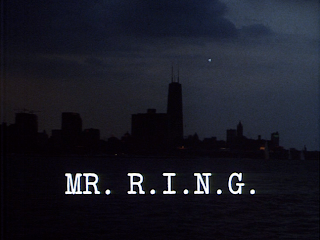 A doctor doing secret government work is killed by his robotic creation. Kolchak is out to determine if the real threat is the robot or the government agents on its trail.

PE: Usually we get a smirking Carl Kolchak bragging to us of the deadly danger he's just avoided like a driver through red cones at the DMV. To see him obviously disoriented and struggling for words is startling. But then we get into the story and it's the old Carl Kolchak narration, all business, as if the director had already forgotten that this guy's on the verge of forgetting the events he just lived through.

JS: It was a bit jarring, although the way the story unfolded, it's more likely that he wouldn't have recalled the events with such detail anyway. 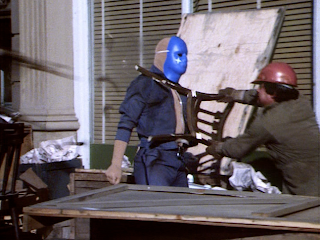 PE: The scientist buying the farm in our opening scene is an obvious homage to the original Frankenstein (1931) but is Mr. R.I.N.G. himself an homage to Yul Brynner's Gunslinger character in Westworld? With the mask on, he reminds me of Michael Myers.

JS: When first introduced, he appears to be a hulking brute with no moral center. Once you add the mask, it's very easy to see how this could have been amongst the many influences on John Carpenter's Halloween.

PE: In this episode, we get our first documented case of "Going Postal." I'm not sure I understand the reasoning behind Mr. R stealing the mailman's uniform. Would it make him look less conspicuous wearing the Eagle instead of the Richard Simmons tights he was born in? I know it naturally wins the trust of anyone who sees that striking outfit but he might still have a problem with the fact that his face looks like a Lite Brite. I thought we might see him heading to a pub for a brew ala Cliff Clavin but no, he smashes a window to steal a bright blue mask. As Michael Caine said in The Dark Knight: "Much less conspicuous." 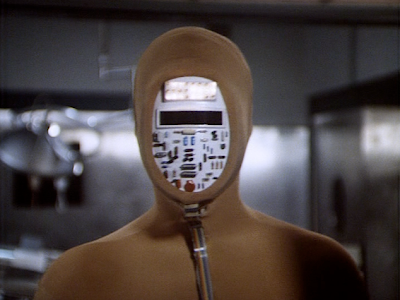 JS: I thought the episode started slow but finished strong, although the inconsistencies are hard to ignore. Mr. R.I.N.G. works well as a sympathetic monster, but sympathetic monsters don't tend to kill someone for their outfit. That's Terminator behavior.

PE: I liked the little throwaway bit about Kolchak going up to "the lake" to investigate a murder that he didn't think "sounded right" but "was right." I picture Carl looking for the Creature from the Black Lagoon and being disappointed that it was just another murder. Just as I found it hard to swallow Carl Kolchak wanting to spend several days on the open sea with a ship full of old geezers, it's difficult to picture Kolchak sitting still long enough to pull a fish out of the water. 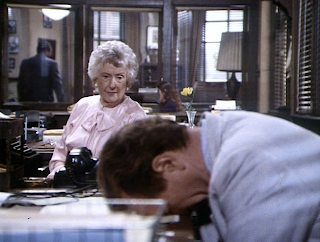 JS: Since Carl is so often full of himself, I thought it was a nice twist for him to admit being wrong about the story, as you noted, and then miss a dream assignment (in the form of the trip to San Francisco) as a result. When he drops his head on his desk, you don't feel like he's just being overly dramatic.

PE: LOL-dialogue after Carl discovers that Tony sent Updyke to San Francisco to cover a high-profile trial and saddled Kolchak with an obit update:

Carl: Do you know, in the old days they gave the obituaries to the lowest form of animal life in the news room? Do you know that?
Tony: Some things never change, Kolchak. You should take some comfort in that.

JS: It was nice to see Julie (née Julia) Adams as the dead doctor's drunk and jealous wife. Not the most glamorous role, but she seems to be having fun with it. 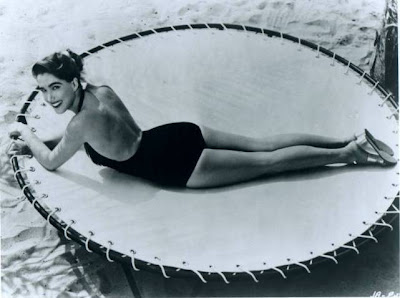 PE: Even pushing fifty, she still had the kind of gams she put on display in her most famous role, that of Kay Lawrence in The Creature from the Black Lagoon.

JS:  Kolchak's exchange with the guard outside the gates of the Tyrell institute was great. Too bad the sign out front didn't have the motto: "More Human Than Human." 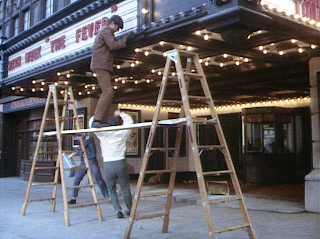 PE: It's nice to see that some workers don't stop their job just because a madman dressed in a blue mask and postal outfit is Bowling with Cops. Speaking of the movie theater (we were), is "The Fever" the only movie showing in Chicago? Those of us paying attention will note that this is the same flick that the old couple came out of in "Horror in the Heights." You don't need to rewind your VHS tapes. Take my word for it. 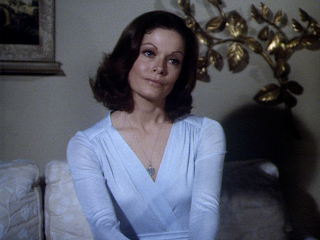 JS: Leslie Dwyer does a decent job as the brilliant creator the robot doesn't kill. Of course, he probably found her more attractive, too. But I think she goes a tad overboard when the machine gets put down.

PE: Just about the most humorless Kolchak yet, Mr. R.I.N.G. also moves at a snail's pace. It's hard not to admire its "grown-up" plot line even while you're wishing there were more thrills and chills. Kolchak: The Night Stalker's influence on Chris Carter and The X-Files has been discussed here quite a bit but this is the first episode where I really saw it. Carl could be telling Tony "The truth is out there" when he's making his pitch to the editor to keep his story alive. I can see the network ordering the producers to bring government cover-ups into the show to make it contemporary (Nixon had resigned just four months previous to this show airing) and "fer God's sake, get rid of the damn vampires!" 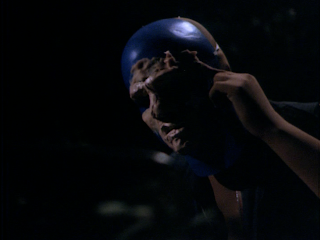 JS: One other aspect of the show that I thought was interesting was Mr. R.I.N.G.'s awareness that he wasn't human, and the effort he went to in order to appear human. The scene where he was crafting his face with the mortician's wax was particularly creepy.

PE: There's a bit of the "stuntman-tossing" going on here but, by and large, our monster stays out of the picture. The point being, I'm sure, that the real scary guys are the men behind the monster. Here we get our first kind-hearted "bear" (as they called the weekly monsters in Outer Limits). As Dr. Dwyer (Corinne Michaels) tells Carl, just before the Army shows up and does what the Army does best, R.I.N.G. went to the trouble of making a mask because he wants to fit in with the human race.  A robot who just wants to be a man.

Next up... Kolchak faces The Humanoids!
Posted by Peter Enfantino at 6:00 AM