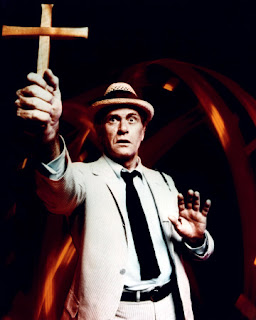 Before we begin, we always feel it's appropriate to set the stage explaining our personal history with the show we're about to watch. So a few words on our relationship with Carl Kolchak.


John: While I was too young to catch the original TV movies when they aired, I do recall watching the series with my older siblings at the impressionable young age of 5. I recall very little about the show other than the back and forth between Darren McGavin and Simon Oakland. As a huge Richard Matheson fan, I have since seen both of the TV movies that he scripted numerous times, but this blog will be my first time exploring the series in its entirety. I'm looking forward to it!

Peter: I have a hazy memory of seeing the ad for the first film in the TV Guide. Of course, in those days, with no internet, TV movies (and movies in general) were a crapshoot. Sometimes you knew nothing at all about them. I watched a lot of TV when I was a teenager, a lot of TV horror films (A Cold Night' Death, the original Don't Be Afraid of the Dark, Crowhaven Farm, Spielberg's double whammy of Something Evil and Duel, Killdozer, the list goes on and on), and a good percentage of these made-for-TV movies were better than the stuff we saw at the drive-in. Anyway, I saw the ad and excitedly tuned in that night to be blown away. I was. Everybody at school was talking about it the next day (TV-movie talk was uncommon in those days of Happy Days, Sanford and Son, and Flip Wilson). I was equally blown away by the sequel and was stoked by the news of the TV show. For a couple months there, Friday night was the best night of TV for genre fans, with Planet of the Apes on CBS at 8 and the more violent Night Stalker at 10. Paradise! I'm interested to see these again (for the first time since 1974) with older, if not more mature, eyes.

If you followed A Thriller A Day, We Are Controlling Transmission, or To The Batpoles, you're already familiar with how we'll be doing things with Kolchak: The Night Stalker. Once again we'll be running our episode reviews Monday through Friday. You can expect to see some familiar names dropping in to provide spotlight articles and regular commentary as we make our way through the series. Watch for our daily reviews to be posted each morning.

For each episode, our individual ratings will be listed separately (so it will be clear for you to direct your hate mail to Peter). Ratings will be in the form of 0-4 Typewriters:

Once again we've invited a respected authority on the show, Mark Dawidziak—author of The Night Stalker Companion, to offer his thoughts on each episode, as well as other interesting facts about the show and its cornucopia of special guest stars. Tomorrow we'll kick things off with an interview with Mark.

Thanks for joining us on this journey. We'll see you tomorrow!