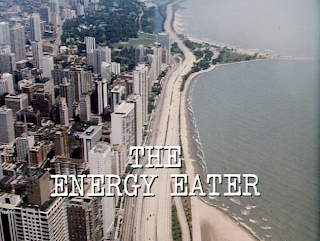 Episode 10: The Energy Eater aka Matchemonedo

A hotel expansion might as well have been built on an Indian burial ground, because it's upset Native American spirit Matchemonedo. Kolchak enlists the help of a modern day medicine man to calm the restless spirit. 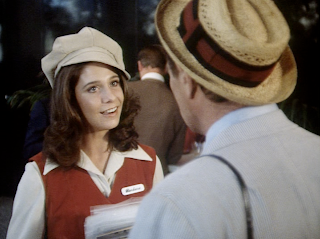 JS: This episode has one of the longest, most drawn out openings yet. I don't think the goal was getting a grand tour of Chicago, or showcasing the Luchi de Jesus score. I'm guessing they somehow came up short on time, and cutting in more shots of the monster wasn't an option. But once we get past that, we get right to business, and meet the first babe of the episode, "Second Girl," wonderfully portrayed by Diane Harper (who has a young Debra Winger look to her -PE). As the character was also a would-be actress, it's no wonder she does such a convincing job. After bouncing from TV show to TV show for 8 years, Harper finally got her big break in film (after which she apparently chose to retire), as the 'radio voice' in Star Trek II: The Wrath of Khan (That was her? I'll be damned! -PE). 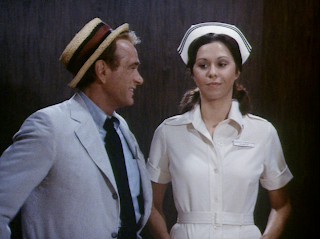 PE: I know the guy's got a nose for news but why would Carl sense something up when Nurse Eisen (Giftos) whispers into her boss' ear at the press conference? Yeah, she's a nurse but it is a hospital. His trek through "No Admittance" areas behind her is a little far-fetched even for this series.

JS: Come on! After making himself at home at every crime scene he enters—even when the crime is in progress—how can his following her be seen as out of character? Giftos, babe #2 of the episode, has a bit of a Jenny Agutter/An American Werewolf in London-thing going on.

PE: Oh dear! I smell one of those "invisible menace" calls down to the spfx lab when the budget's dwindling.

JS: I have to say, of the invisible enemy episodes, this is my favorite. I think the force's invisibility is justified by the story, plus, the real world manifestations are actually interesting. And I give them bonus points for actually showing us something, by piecing together the X-Rays. You can't deny that was a cool sequence. 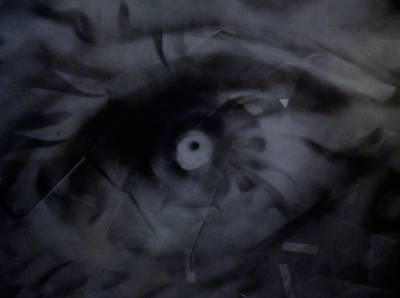 PE: At least the newsroom banter crackles. Kolchak uses his usual charm to screw up Tony's head again. Vincenzo wants Carl to investigate a mob shooting but the reporter wants to stick to the hospital incident. Tony's adamant:


Carl (shrug and sighs): All right, I'll cover it. But it's a waste of time as you'd know if you've ever done one.
Tony (outraged): If I've ever done one? How you think I got behind that desk?
Carl: I don't know. How?
Tony: I was top crime reporter in this town when it was important, when it was dangerous! If you weren't careful, you could wind up under a... under a Pierce Arrow!
Carl (sarcastically): Oh boy, that was a long time ago, Tony. Yeah, you've probably forgotten how (waves his hand). No, I'll do it.
Tony: No! I'm gonna show you how to dig out a story!
Emily: Good for you, Mr. Vincenzo. I like to see older people with spunk.

JS: I actually didn't think the writers had the right tone for Kolchak/Vincenzo, as evidenced by the rude fashion in which Carl dismisses Tony at the hospital.

PE: You just don't get good security guards today like they had in 1974. Carl walks into the hospital with a stethoscope around his neck, looking like anything but a doctor and the boob just lets him go right in. This, despite the fact that Kolchak hasn't even tried to hide his camera!

JS: Anyone will tell you, the trick is to act like you know what you're doing. Carl's obviously smoother than you think.

PE: Kolchak brings an architectural engineer to the hospital undercover and the guy is flummoxed. He can't explain why the air conditioning is super cold but the floor is hotter than hell. He also offers no explanation as to why there's a boom microphone above his head. I couldn't trust a guy with such a bad rug. 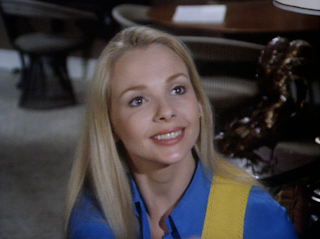 JS: Ouch! Let me take a moment to introduce babe #3 of the episode - Joyce Jillson as the toaster-impaired neighbor to Jim Elkhorn. Jillson was the official astrologer for Twentieth Century Fox, suggesting astrologically favorable dates for movie openings. You'd think I was making this up, but she was the once who apparently decided that Star Wars should open on May 25, 1977. And clearly that's the reason the movie went on to become a blockbuster.

PE: Call me crazy but that almost sounds like the Jaws theme (about seven months prior to its release)  as we're following the (very lovely) Nurse Eisen to the Pathology Lab. I like this babe, she's got moxy:

Interesting though that she'd jeopardize her job by telling Carl all about the problems the hospital's been having and topping off her recap by showing Kolchak the latest victim... who just happens to be lying on a gurney right behind them. 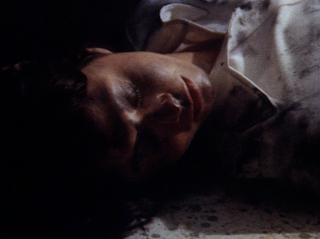 JS: I thought she was great. But I've got a problem. After they meet with Jim, Kolchak pushes her out the door so he can go off with Elkhorn. In the next scene, the two men are at the hospital, where Matchemonedo does some damage in the morgue. All they seem to care about is picking up the x-rays, while seemingly dead nurses are strewn everywhere... including Eisen? If that's not her, why the lingering shot? At least Mel Tartar got a brief moment alone with Kolchak when his dead body was discovered back in "The Werewolf." 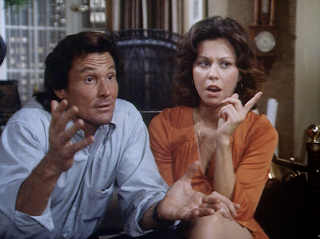 PE: Best line of the show: Carl interviewing Jim Elkhorn: "About Matchimodo. Is that any relationship to Quasimodo?" Elkhorn's played by William Smith (Conan's pop), who's at least as good as Richard Kiel at chanting Indian mumbo jumbo. (It beats Old MacDonald, that's for damn sure. -JS) Smith was a good-looking, rugged guy, at the time, who went on to semi-fame as Falconetti on Rich Man, Poor Man and as Kimo in the final season of Hawaii Five-O. The obvious comparison is Clint Eastwood, who Smith co-starred with in Any Which Way You Can (he was the one who didn't eat bananas). Was I the only one who expected Nurse Eisen to emerge from Elkhorn's bedroom when Carl comes to call and the shaman answers his door in a robe?

JS: I thought Jim and "Charles" Kolchak had a great rapport. I really liked how they partnered up to deal with Matchemonedo. I like to think if the series had continued, Kolchak and Elkhorn might have worked together again on another Native American mystery.

PE: Poor Claudia Granoff (Melissa Greene). Not only is she paralyzed and stuck in one of those funky beds, but they've given her a mute nurse. "Let's go over the budget again boys. Are you sure we can't afford looping? Well, how about a bear costume? I hear Kiel's still in town."

JS: I like to think that Kiel portrayed the invisible Matchemonedo, earning him a Kolchak monster-of-the-week three-peat. 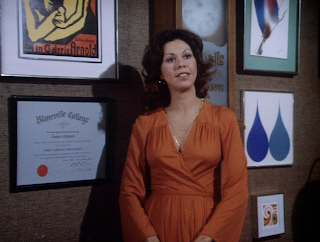 PE: Diana Lanier (Joyce Jillson) took the words right out of my mouth when I saw Nurse Eisen out of her uniform and in that purty dress: "My rocks are melting." This is not the first time Elaine Giftos graced a nurse's uniform (and been out of it as well!). In 1970 she played Nurse Sharon (complete with flowing cape!) in a beautiful slice of Roger Corman Americana that just missed being nominated for Best Picture, The Student Nurses.

JS: Did anyone else think the Energy Eater might manifest itself and get Elkhorn while his hand was in the toaster? Kids, don't try this at home. 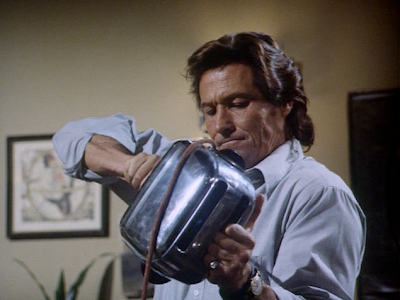 PE: The last time Robert Cornthwaite looked in a microscope and saw something this incredible was up  at that arctic outpost in The Thing From Another World (1951).

JS: Did you somehow miss our pal John Mitchum (Batman, Thriller, Dirty Harry) as the janitor?

Next up... Kolchak faces the The Rakshasa!
Posted by Peter Enfantino at 6:00 AM