Mark Dawidziak on The Energy Eater

And so we plummet from one of the very best episodes ("The Spanish Moss Murders") to one of the very worst. But, not to worry, as poor as "The Energy Eater" is, Kolchak: The Night Stalker magnificently rebounded from the depths of this lakefront hospital's crumbling basement, airing what many consider its finest hour, "Horror in the Heights." So, hold on to your bird-feeder hat, the lurches in quality during this middle stretch could give you a nasty case of whiplash.

To be fair, though, "The Energy Eater" looks all the more inept because it is hammocked between "The Spanish Moss Murders" and "Horror in the Heights." Even a slightly better episode would suffer in comparison. And even third-rate Kolchak is going to be worthwhile on some levels (subbasement included) if Darren McGavin is the actor underneath that pork-pie straw hat. But, to be fair to the rest of the episodes, this is about as far off its game as the series got.

The evaluation from The Night Stalker Companion:

One of the weakest Kolchak episodes, "The Energy Eater" is repetitious, derivative and badly paced. The mixture of legend and electricity is anything but shocking. And the ending is sudden and unsatisfying.

The whole choppy, patched-together episode is pretty unsatisfying. Even elements that usually lift a lesser Kolchak episode are sadly lacking here. The exchanges between Carl and Tony fail to provide much in the way of sparks. Carl's run-ins with authority figures seem more by-the-book than usual. And even the guest cast, almost always a fun feature on this series, doesn't match up well with the Matchemonedo story. The one promising guest-star (and this doesn't amount to much) is William Smith's womanizing construction crew chief Jim Elkhorn. He and Kolchak briefly make an intriguing team battling the powerful, ancient and invisible bear god awakened from its slumber in an incredibly grumpy mood. Smith shows sly glimpses as the charming ladies man, able crew chief and reluctant shaman. Best known as Joe Riley on Laredo (NBC, 1965-67), Smith later mixed it up with Clint Eastwood for the climactic bare-fisted brawl of Any Which Way You Can (1980). But he's stuck in a Kolchak caper that doesn't have much a of a paranormal punch.

Joyce Jillson, who achieved a different kind of fame in the '80s as Nancy and Ronald Reagan's astrologer, appears as Diana Lanier The year before this episode aired, she had the title role in the action-comedy Superchick and played Joan Stacey, fiancee of the murder victim in the excellent Columbo mystery, "Any Old Port in a Storm." Michael Fox, who plays Frank Wesley, appeared in two second-season Columbo mysteries, "Etude in Black" and "The Most Dangerous Match." But even Columbo would have a tough time solving the case of the ailing hospital story.

"What would you say if I told you there was a force beyond your comprehension trying to destroy this hospital?" Carl asks at one point. I'd say it might be the script, Carl, which is anything but forceful. 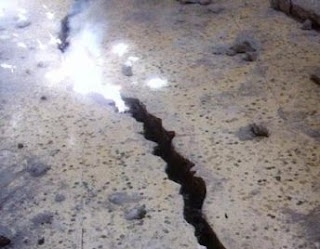 Perhaps there's something fitting about the schizophrenic quality of these episodes. By this point, after all, there were creative differences that ran deeper and wider than the cracks in the basement of the doomed hospital. It is no secret that once veteran show runner Cy Chermak took over as producer of the series, divisions developed behind the cameras. Denied the executive producer title he felt would be his, Darren McGavin doggedly fought for his vision of the show while Universal's able producer, Chermak, fought to keep the series on track.

Chermak presided over story conferences, production meetings, rewrites, scoring and the editing process. McGavin took the lead on the set. Chermak fought to impose his vision for the series. McGavin fought back, certain that the studio was heading down the wrong path for Kolchak.

"Yes, one of the reasons tensions ran so high on the show was because the relationship between me and Darren deteriorated rapidly," the gracious and candid Chermak told me when interviewed for The Night Stalker Companion. "And everybody knew it. When we were in my office, I was the boss. When they were on the set and I wasn't there, Darren had them doing what he wanted. He never accepted that I was running the show.

"So, aside from the long hours, the people working on this show were torn. It was very tough on them. It really wasn't two camps. That's not quite right. There was one camp, mine, and one actor -- a major star -- down on the set while I'm frantically preparing the next show."

McGavin and David Chase described the same set of tense of circumstances. For all the battles, Chermak refused to cast McGavin in the role of vainglorious villain or temperamental star.

"He was not altogether to blame for the situation," Chermak said. "If we were doing this show today, he would be the executive producer in fact and in title, and he would do it the way he wanted. That's just not the way Universal did things in 1974. But you can't blame him for fighting for what he believed was right. Nobody's questioning Darren's sincerity and dedication, or his standing as a star . . . and he was ideal for that role."

In fact, Chermak, in an industry not known for honest self-appraisal, placed much of the blame on himself.

"As tough as The Night Stalker was, I didn't want to give up on it. I think I let the show down by not being able to get along with Darren. It's as much my fault as his. In those days, I thought it was enough to be talented and you didn't have to get along. That was the biggest mistake I made on The Night Stalker. Retrospectively, I realize that my job was to get everyone on the same page. It was my job to make sure we were getting along. I never did that, and it hurt the show. I went in and said I'm the boss. Universal needed evolution. I gave them revolution."


And despite the battles, Chermak hoped the series would get a second season so he could truly get it on track.

Still, with a young David Chase as his story editor, Chermak did bring a direction to the show that allowed it to produce such superior episodes as "The Spanish Moss Murders" and "Horror in the Heights."

One of the first things changed was the spirit of the humor on the series.

"You absolutely need humor to relieve the tension of horror,” Chermak said. "All tension is no tension, just as all pacing is no pacing. I wasn't against humor. I was against situation comedy for this show. We wanted to change from Darren's concept of comedy to my concept of humor. The networks, then as well as today, have a tough time understanding the difference between comedy and humor. We thought we understood the difference very well. And I think we brought in more of the black humor and the inside humor that the college crowd got. That was primarily what I thought would help the show."

Chermak also changed the approach to the supernatural stories. He felt that it was important that the scripts vary the established formula as much as possible, creating moods that suited the individual plots.

When first producer Paul Playdon left the series early on, The Night Stalker became a Universal series "produced in association with Francy Productions, Inc." Francy was the production company owned by Chermak and his wife, writer-producer Francine Carroll: Francy for Fran and Cy. Also at this point, Francy was producing Amy Prentiss. Created by Carroll, Amy Prentiss was a series far ahead of its time. Part of NBC's Sunday Mystery Movie package for the 1974-75 season (with Columbo, McCloud and McMillan and Wife), the police drama boldly moved into prime time with the title character, a thirty-five-year-old widow played by Jessica Walter, as San Francisco's chief of detectives. Although viewers did not immediately respond to a woman in command, Walter's performance was recognized with an Emmy. Also in the cast was an eleven-year-old Helen Hunt, about twenty years before starring in NBC's Mad About You.

Despite the creative differences, or maybe because of them, the Chermak-led team produced some remarkable moments. "The Energy Eater," the last of three episodes directed by Alex Grasshoff (and his second based on a Native American legend), clearly isn't one of them, but wait till you see what's lurking around the corner, in a neighborhood known as Roosevelt Heights. Get ready to roll with the Rakshasa.
Posted by Mark Dawidziak at 12:00 PM