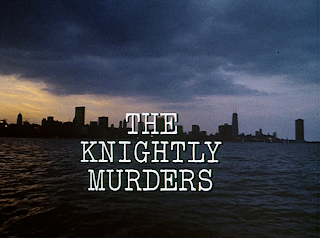 A string of murders in Chicago have a strangely similar trait—they're all carried out with medieval weaponry. Kolchak is convinced he's found the suit of armor responsible; leaving him to find out who fits inside. 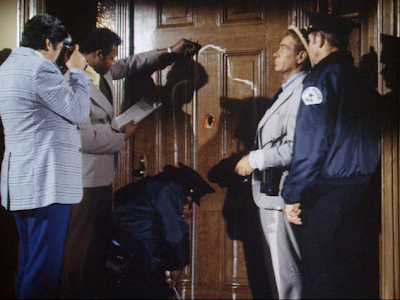 PE: Well, now I've got a problem: do I like Keenan Wynn's animal growl or John Dehner's New Age psychobabble better? This is a tough one. Dehner slips right into the role of Captain Rausch, a cop so different from any other this show has seen before. He happily gives Carl information about the murders he's investigating and then mulls over the murders in a very un-policeman like way. When Carl asks what killed one of the victims, the Captain answers in a melancholy tone: "Society." In the same conversation, Rausch asks Carl, "Did you know that there were one-seventh as many ice-pick killings last year as there were in 1942? Technology, Carl." For once, it seems as though Carl would prefer the bellow of Captain Siska.

Rausch: Negative! Last night's statement is no longer functionally descriptive and the negative is also appropriate to the second part of the second question you asked. There is no, I repeat no, reason to believe that the death of (unintelligible)... Homicide is a very democratic institution. One more question.
Reporter: Allow me to rephrase that, Captain...
Rausch: Negative. Any more questions? 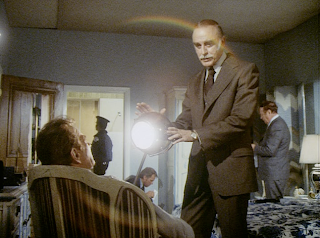 JS: Particularly compared to Siska's last appearance, Rausch wins hands down. Every time Kolchak finds himself in front of the captain, you can't wait to hear what direction he's going to go next. And I loved the way they introduced the concept. As he begins pontificating, Kolchak asks him to start over so he can record it. Rather than be annoyed, he's soon got Kolchak hanging by the strap of the recorder and won't let go as he rambles on and on. What a refreshing twist after so many similarly written captains.

PE: Minerva Musso (Lieux Dressler) is about as risque as Standards would let you get in 1975 primetime. When Carl invites himself into Musso's house and then into her bedroom while she's talking on the phone, she asks Carl "Robbery or rape?" When Carl answers "Neither one, so don't get excited". She looks very disappointed. Then later, when Carl hears the knight shambling in the hall, Kolchak asks the woman, "you got bad pipes or something?" Musso, outraged, exclaims "I beg your pardon?!"

JS:  That was a great exchange. I thought it was interesting that David Bowie got a shout-out in a Kolchak episode. I wouldn't have thought that of all the possible celebs to plug-in as Minerva's next redecorating client, Bowie would have been a prime contender in 1975. 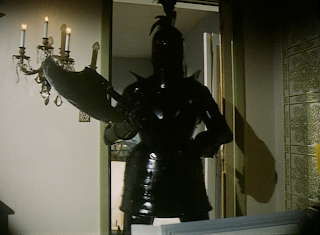 JS: Nice that they used the episode as an opportunity to teach the audience all about small arms of medieval times. In case anyone didn't know the difference between a crossbow bolt, lance, mace, or axe before the episode, they certainly did by the time they were through. It might have been nice if there was some story point explaining why each victim was dispatched using a different method, but I'm willing to accept that it was likely done for the sake of keeping things interesting.

PE: I don't blame the knight for the drastic measures he employed. If my house was being renovated for a discotheque, I'd be brandishing a crossbow myself. While not quite as energetic as Lancelot, I did paste a DISCO SUCKS bumper sticker on my Maverick as a high schooler. I couldn't imagine someone coming into my domicile and playing "We Are Family" or "Float On" every night.

JS: So are we supposed to assume that the spirit of the knight attends city council meetings? Or has ghost friends on the planning commission? I personally thought it was a silly motive for the killings, but assuming he somehow had the awareness of what was to come, can't blame him for wanting to stop it before it was too late.

PE: One more time: John Dehner does the unthinkable, he steals every scene he's in with Darren McGavin. Could Captain Rausch be the cop that Siska might have been had he stuck with his group therapy? It's either zen or Michoacan. Hans Conried is aces as well as the mysterious museum curator, Mendel Boggs. Could he have something to do with the killings? He comes off very believable as insulted the police would consider him a suspect.

JS: I loved when the cops tried to squeeze the armor onto Boggs. Even if not the killer, he probably felt the same way as the offended knight. I'm a big fan of Conried, who portrayed Dr. Terwilliker in the Dr. Seuss film The 5,000 Fingers of Dr. T, as well as numerous cartoon voices including one of my favorite characters, Snidely Whiplash from Dudley Do-Right. Here's Conried interviewing Rod Serling from Fractured Flickers a show he hosted from the people behind Rocky and Bullwinkle:

PE: If I was Carl Kolchak and my editor refused to run any of my articles, I'd stop risking my life for a story. After 20 supernatural and scientifically challenging adventures, our intrepid reporter must have an idea, while chasing alligator men across a swamp, that no one will ever know this happened and it becomes  something you do for, as Paul Revere once phrased it, "Kicks."

JS: Between Conried and Dehner, we can forgive the lack of classic bits between McGavin and Oakland in this outing. After a lengthy scene where Carl uses his normal trickery to determine precisely how much pressure it takes to crush a telephone, he realizes the weight of a man in a suit of armor is sufficient. By that time, I think most of the audience is thinking what Tony says:


Vincenzo: All my life I wanted to know a medieval knight could crush a telephone.

Indeed. Despite being very entertaining thanks to the contributions of a number of great supporting characters and a unique monster of the week, it also falls victim to the show's Achilles heel. The vanquishing of the knight is all too easy. I'm not looking for a long, protracted swordfight with Kolchak—he is who he is—but once again the ending felt rushed. I wanted something more substantial.

Next up... Kolchak faces The Youth Killer!
Posted by Peter Enfantino at 6:00 AM