Many bios for Nina and/or Carol Wayne mistakenly assume they were the same person.  The sisters were born about a year apart — some sources cite 1941 or 1942 for Carol, 1943 for Nina. They posed together for a Playboy pictorial in 1984.

Sis Carol perished under dire circumstances in 1985 after appearing in Heartbreakers with Peter Coyote and Nick Mancuso (a Bobby Roth movie STILL not available on DVD); see:


Carol was also “Art Fern”’s Matinee Lady for the many Tea-Time Movie skits on The Tonight Show. 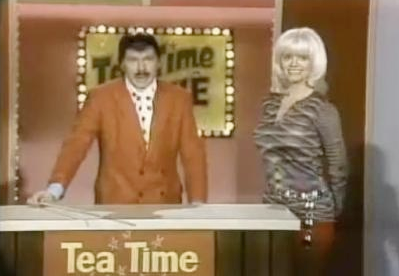 Nina Wayne had a slightly harsher “look” than her sister, and apparently The Night Strangler was her final credited appearance, although she is still living.


Both also worked the Folies Bergere in Vegas during the mid-60s.

Who cares whether Jo Ann Pflug had a belly dancing double for a couple of fleeting long shots?  The most interesting thing to me about those club scenes comes when Charisma Beauty is introduced, and the music riles up … and it is the smokiest, sleaziest, downright COOLEST “fake belly-dancing music” ever – I don’t know whether Robert Cobert composed it, or it was a library cue, or what … but I’d love to have a whole album of it.

Anne Randall, the spunky “Shiela” of The Night Strangler, was also a Playboy Playmate you may recall glimpsing in Westworld, as well.

Carol Lynley was the go-to TV Movie woman of the 1970s, sort of a TV version of Lee Remick, with a slightly arctic, aloof look.  She’s the “ice” to Pflug’s “fire” in the Night Stalker pantheon.  The loss of Carl Kolchak’s sex life is probably the largest deficit in the series iteration of the character — one quickly gets the impression that Carl only eats chili and spends the rest of his time chasing one improbable monster after another.  In The Night Stalker, he drinks (from the first scene!) and is obviously involved in a relationship with a lady of the evening.  In Strangler, he seems to be on the wagon (although he is first glimpsed in a bar), and is equally obliquely involved with Louise Harper (he’s protective of her and she decamps Seattle with him); then, in the series — no girlfriends.

(I once included a bird-feeder hat-tip to Carl in a screenplay [which went nowhere] featuring Carl’s illegitimate daughter Annie Kolascheck as a character, also a reporter.  She may yet appear to tell us more about her wayward dad.)


We invite our adult clientele to venture behind the curtain into Omar's Tent. 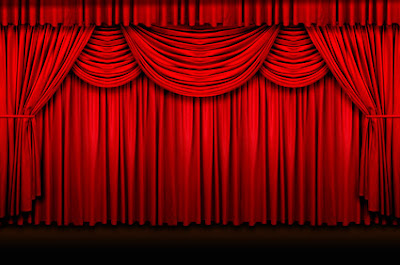 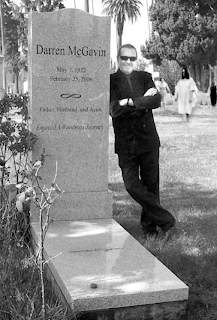 David J. Schow (DJS) is the author of numerous short stories, novels, screenplays, and critical commentary all worthy of your attention. His latest novels include the critically acclaimed thriller Internecine and the forthcoming Upgunned. He was an integral part of both A Thriller A Day (ATAD) and We Are Controlling Transmission (WACT), and we do our best to drag him along wherever we go. As for the photo to the right, here's what DJS had to say: "Coincidence?  You be the judge ... photo taken at Maila Nurmi's funeral (and digitally massaged by Pete Von Sholly).  Maila just happened to be buried cater-corner to McGavin."
Posted by John Scoleri at 6:00 AM