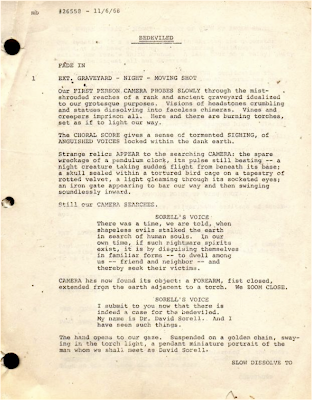 Ahh, I can hear the Billy Goldenberg music now!  What you’ve just read was obviously designed as the show opening for Bedeviled, Richard Alan Simmons’ never-launched NBC series and Universal’s second crack at a demon-hunting shamus, this time informed by the Euro-sophistication of Rosemary's Baby.  It’s also the first page of the teleplay that came to be known as Fear No Evil, adapted in 1969 as a high-profile World Premiere TV movie.  (Significantly, Dead of Night was briefly considered as a title, partly because the story involved a haunted mirror distantly like the one in the 1946 classic, and partly because Universal, which released DON domestically, still retained limited rights to the property).

In any event, an ultra-impressive creative team was assembled for U’s newest take on a TV series formula it was determined to explore.  Simmons, Richard Matheson’s uncredited co-scripter on The Incredible Shrinking Man, would soon become one of Universal’s most respected producers during the studio’s network TV heyday (’70-mid ’80s).  Additionally, Fear No Evil was based on a “story” (probably a brief treatment) by Guy Endore, famed author of horror classics like Hands of Orlac and Curse of the Werewolf.  The possessed mirror itself, an elegant creation aglow with laser-light phantoms, was a figurative monster much like Matheson’s House of Usher, serving as a malignant, life-draining entity … a “reflection” of unleashed sexual passion and the perfect challenge for a supernatural-savvy psychiatrist.

Who better than Louis Jourdan, the most sophisticated man on planet Earth, to play “doctor to the bedeviled” David Sorell?  Handsome, smoothly sensitive and wisely open to the mysteries of the universe, Sorell is first and foremost a doctor, his halo forever intact as he duels with pure Evil for the life and/or soul of his guest star patient.  Serving as the psychiatrist’s sounding board and seasoned mentor on metaphysics would be Englishman Wilfred Hyde-White as Harry Snowden, completing the dignified Euro-flavoring Simmons was aiming for.

Oh, yes; let’s not forget an absolutely indespensible part of FNE’s creative chemistry: the music score by William (Billy) Goldenberg, a mesmerizing mix of Gregorian chants, Eastern strings and a madman’s organ.  Picking up where Lalo Schifrin’s choral score for Dark Intruder left off, Broadway-weaned Goldenberg made his feature debut with Simmons’ supernatural foray.  He would go on to become one of the most prolific and respected composers of television films (scoring virtually all of Steven Spielberg’s small screen work, including Duel), massive chords and a tangy sitar his signature during this era.  As far as I’m concerned, a Columbo episode without Goldenberg music loses half of its potency right out of the gate.
Fear No Evil was stylishly directed by Paul Wendkos, best known to sci-fi fans for his ’67 stint on The Invaders.  He even retains that series’ director of photography (some of Andrew McIntyre’s most experimental work is featured in FNE), and the demon-phantom of Paul, when materializing in the mirror, glows bright red like a zapped alien from the old Quinn Martin show.  In every way, Wendkos managed to give producer/writer Simmons exactly the class-act telefeature he was hoping for.  Is David Sorell’s patient Barbara (Lynda Day) having erotic fantasies, or is her recently deceased fiancée Paul Varney (Bradford Dillman) actually returning from the dead every night via his full-length mirror, draining her of blood – life itself – during their love-making interludes?  Some tense snooping uncovers a reckless paranormal experiment gone awry, with Varney, and finally his antique mirror, possessed by the unleashed Persian demon Rakashi – Lord of Light, Lust and Blood.  In the end, an intuitive Dr. Sorell defeats this intangible entity with a notion that is both poetic and ingeniously simple: “Beyond infinity, you can destroy me, David,” Lord Rakashi smugly informs his mortal challenger while inhabiting the body of physicist Myles Donovan (Carroll O’Connor), “But can you find infinity?”  Sorell does just that by surrounding the Haunted Glass with a three-cornered mirror, thereby multiplying the reflections to infinity, then smashing the trio of glass panels in order to create a reflective chain-reaction.  This has the effect of vanquishing Rakashi right where the demon lives, obliterating Varney’s enchanted looking glass spectacularly while coughing up ‘cured’ Barbara in the process.  Thwarting a cosmic abstraction with a thoroughly abstract solution seems to work just fine for Dr. Sorell, and one can only wonder what he charged for this particular house call.

“There’s always room for the supernatural,” NBC President Mort Werner proclaimed in 1970.  “The Jourdan character could return annually.”  True enough, but why wasn’t Bedeviled green-lit as a regular weekly series?  Ratings for Fear No Evil were excellent and the reviews were quite good.  Based on my conversations with NBC execs in 1971, there were sensitivity concerns about an ongoing series that dealt with devil-worshipping in such a serious and grown-up fashion; a TV movie was one thing, a weekly series something else again.  Moreover, NBC had certain reservations about the plausibility of Simmons’ central premise; a psychiatrist encounters the supernatural every seven days?  Maybe once or twice in a lifetime, certainly not 26 hours every TV season!  Finally, in an unexpected quirk of programming fate, Universal was also pitching Rod Serling's Night Gallery to NBC that very same year, and the World Premiere pilot (also scored by Goldenberg) had achieved even stronger ratings than Fear.  No way was NBC going to buy two occult-themed series, so they went with Serling’s anthology as part of their Four-In-One skein.  Actually, it’s fun to imagine Universal conjuring an NBC Thriller Movie rotating umbrella series, comprised of feature-length Bedeviled and Night Gallery episodes!

But while Bedeviled was denied regular series status, Ritual of Evil, the 1970 World Premiere follow-up, enabled Dr. Sorell to lay the spooks to rest one final time, this time in a location-heavy ensemble piece directed by Robert (The Avengers) Day.  Interestingly, many fans prefer Wendkos’ more studio-bound take because it was deliciously classical, starting with the elegance of the haunted mirror itself.  FNE might even be described as the missing link between U’s gothic TV triumphs of the ‘60s (Thriller, most notably) and the occult-obsessed Movie of the Weeks that would soon proliferate in the 1970s.  But while horror buffs preferred a more traditional approach, NBC wanted demon slayer Sorell to function in a hipper, more modern world of California witchcraft, not in dusty old tombs.  Even so, a certain degree of classical material needed to be included, so a satyr statuette with glowing red eyes became a reasonably-effective substitute for Guy Endore’s demon glass.  This time around, Dr. Sorell would be targeted by bewitching photographer Leela Barton (Diana Hyland), a literal kindred spirit who happens to worship Satan and collect souls for him, “forcing an amateur black mass into the real thing.”  Some viewers were thrown by Ritual’s rather surreal conclusion; a defied but still amorous Leela vanishes as if she never existed, leaving a stunned Sorell to wonder whether they will ever meet again (“Next time, my love, perhaps in another life”).

Human culpability seems to be a heart of every David Sorell occult investigation, with supernatural forces reflecting and often amplifying our own considerable negatives.  Exorcizing a demon goes hand-in-hand with uncovering the down-to-earth crimes of a guilty supporting character (corrupt scientist Donovan in FNE, greedy would-be murderer Edward Bolander in Ritual).  “What is the supernatural except our own fears and passions in disguise?” psychiatrist Sorell reminds us.  On a superficial level, this means that we wouldn’t be seeing werewolves and swamp monsters on Bedeviled week to week, but rather elusive elemental forces of Evil inhabiting a laser-like universe just beyond known reality, ready to be unleashed whenever our very-human shortcomings open that darkest of doors.

Personally, I think we could’ve gotten at least one more Bedeviled TV movie out of the deal before Jourdan called it quits and moved on to other projects.  Again borrowing a page (and concept) from Dead of Night, how about an unhinged ventriloquist needing help from Sorell because his dummy “has a malevolent mind of its own” (it’s actually possessed by a demonic spirit)?  Or maybe Harry Snowden once belonged to a group that is now addicted to its own power, using witchcraft to influence political leaders and such.  Plotlines like these might’ve been extremely entertaining, but they were never meant to be.  Instead, Universal turned sideways for its next supernatural sleuth, pretty much adhering to the Bedeviled formula with a property brought in from an outside, independent producer…

COMING TOMORROW: Parapsychologist Michael Rhodes tackles eerie ESP phenomena and psychic manifestations as a “doctor to the bevisioned” in THE SIXTH SENSE!
Posted by John Scoleri at 6:00 AM