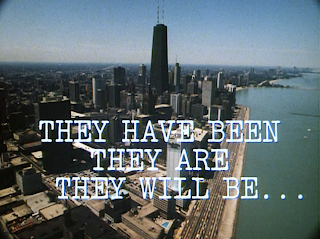 Episode 3: They Have Been, They Are, They Will Be aka U.F.O.
Original Airdate: 9/27/74
Guest Starring: James Gregory, Dick Van Patten
and The Universal Studios Wind Machine as The Alien
Written by Rudolph Borchert (from a story by Dennis Clark)
Directed by Allen Baron

Something strange is going on in Chicago. Animals and machinery are disappearing. Puddles of  black goo are left behind at the crime scenes. Government suits are making the rounds. It doesn't take a reporter of Carl Kolchak's questionable qualifications to point an accusing finger into the night sky... 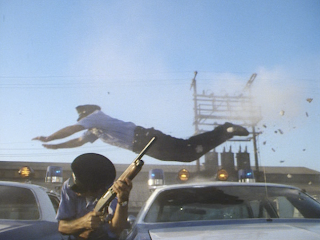 JS: My first thought at a scene of cops being tossed through the air by an invisible force was UFOs? When pigs fly...

PE: Funny that the Chicago Cubs are invoked time and again in this episode. Carl Kolchak and the Cubs have a lot in common. Neither get respect and they're both also-rans. The idea that they were in the 1974 World Series was absolute fantasy, even more fantastical than a lead eating alien.

JS: Give the writers credit for acknowledging the location. And hey—it set up a great scene where Kolchak nearly ruins Vincenzo's meal by describing the details of the black goo. Which got me thinking. Everyone knows that Chris Carter points to Kolchak as a key inspiration for The X-Files. And it doesn't take a brain surgeon to point out that this alien visitor episode must have resonated in particular (God only knows why)... but I kept wondering if the black goo in this episode was in some way an inspiration for the 'black oil' that carried throughout that show's mythology.

PE: By the fifth Kolchak entry, the muzzling cop (here played by a sleep-walking James Gregory) has outstayed its welcome. I almost expect the chief to start his "Kolchak, get out of here... Kolchak, you can't print that... Kolchak, I'll have my men arrest you!" spiel before the monster shows up.

JS: Granted, it's part of the formula, but it's James Gregory. General Ursus! I only wish we could have seen Gregory and Claude Akins side-by-side in the law enforcement ranks.

PE: What's with the awkward two-minute drive after Kolchak's kicked off the premises of the lead ingot warehouse? I get that the radio voice is advancing the plot but wasn't there a less clunky way of doing it? That voice leads us to Dick Van Patten, a few years shy of his cheese TV classic, Eight is Enough. Proof that anything can last 124 episodes. Even as a teenager I was smart enough to know a dweeb like Tom Bradford had as much chance landing a sweet babe like Betty Buckley as the Cubs had of winning the World Series in 1974 (or any other year for that matter).

JS: You'll be thrilled to hear that the first season of Eight is Enough is available to buy at $1.99 per episode on Amazon Instant Video. Since, despite the cool teen that you would have us believe you were, you're obviously somewhat familiar with the show.

PE: This episode is a perfect example of why Kolchak's nemeses should be earthbound and horror-based like vampires, werewolves, and zombies, rather than science fictional. Never mind the bad special effects (wind has never come off less dangerous), the kid in us wants a boogie man not an invisible lead eater. 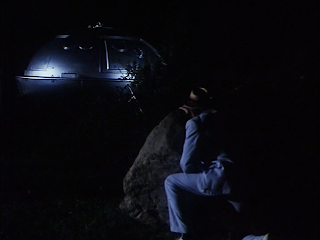 JS: I think the mistake was in putting all of the budget towards building an unconvincing flying saucer, instead of investing in a halfway decent alien costume. If you replace the wind tunnel shots with some decent shadowy alien footage, with an effective reveal at the end, I think we'd be talking about this episode in ratings of whole typewriters.

PE: More badly written voice-over by Carl Kolchak, when a purse snatcher is about to buy the farm:

Peter Hudson, wealthy beyond his dreams. A happy man. Peter didn't know that his parole was about to be canceled.

JS: They can't all be Matheson. 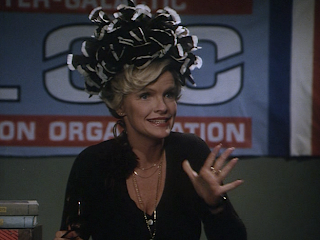 PE: Where are the enjoyable debates between editor and reporter? Our only bright shining moment in this otherwise dismal mess is the repartee between Carl and Howard Gough (Phil Leeds) at a UFO survivor's meeting. After listening to a female crackpot (Maureen Arthur) explain that she was abducted by aliens and made to drink a concoction that tasted "not unlike ginger ale and bourbon," the two men converse about UFO sightings until the nut pipes up again:

Woman: Their leader, a very smart looking alien, got a little fresh with me, but when I let him know that I was firm, determined... he kept his extensions to himself....

Woman: the destructive star called Wormwood is not a star, but a missile! Upside down and backwards it reads Doomrum.
Carl: Doom...
Howard: Doom... That doesn't spell doomrum.
Woman: Well, it certainly does,
Howard (to Carl): Does that spell doomrum?

JS: I haven't seen a hat that frightening since Silvia Slattery's in Thriller's The Terror In Teakwood! You're right though, Carl and Tony don't have as much of their standard bickering this time out, but we get a decent dose of Monique, who apparently returned from her cab trip to Brooklyn. 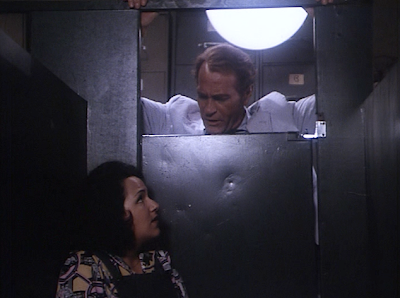 PE: Allen Baron, director of five Kolchak episodes (including "The Ripper"), wrote and directed the well-regarded hitman noir, Blast of Silence (1961), a "thinking man's crime drama" that garnered the Criterion treatment a few years ago.

Next up... Kolchak faces The Vampire!
Posted by Peter Enfantino at 6:00 AM