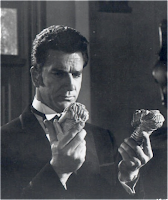 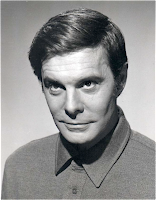 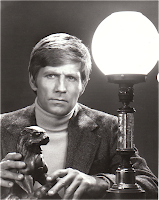 Part One of Three: The Black Cloak

As every fan of golden age cinema knows, Universal Studios specialized in bone-chilling horror, giving the world Karloff, Lugosi, both Chaneys in iconic monster make-up, the Creature from the Black Lagoon, and countless other seminal bogeymen.  Big U was no slouch on the small screen, either; 1961’s Thriller is generally considered the greatest classical horror anthology of all time, and The Alfred Hitchcock Hour also delivered its share of notable terror-tales, especially in the last few years of its run.

But Universal wasn’t satisfied with this; TV in its most characteristic form meant ongoing characters week-to-week.  Cops, detectives, lawyers, doctors… choose the profession that fits your genre.  So the first big question for U/MCA in their decade-long crusade for a prime-time horror “hero” was, what kind of protagonist makes logical sense?  Since monsters, phantoms and magic are generally considered unreal and inexplicable, an intellectual detective-type seemed to fit the bill… but he needed to be a True Believer, someone with arcane knowledge and contacts, a sleuth who begins when the traditional gumshoe or cop throws his hands up in total frustration.

Enter Brett Kingsford, sophisticated man-about-town who moonlights as a special investigator for the police in turn-of-the-century San Francisco.  Kingsford is an expert on the occult, and a series of weird Jack the Ripper-style slayings practically begs for his unique services.  Aided by a diminutive manservant, a secret lab that enables him to change his appearance via make-up, a la Sherlock Holmes, whenever necessary, and secretly sponsored by grounded, no-nonsense Inspector Misbach, Kingsford tracks down a misshapen monster named Malaki, who is trying to swap bodies with his perfectly formed twin brother.  Calling upon Lovecraftian-like Sumerian Gods, this creature manages to accomplish his nefarious goal, but is ultimately foiled by Kingsford in time for a nifty, JEKYLL AND HYDE-like transformation sequence.

The Black Cloak was intended to be a weekly series on NBC for its 1965/1966 season.  The hour pilot, produced by Jack (Night Gallery) Laird, cast dashing Leslie Nielsen as Kingsford, Gilbert Green as Inspector Harvey Misbach, and little person Charles Bolender as manservant Nikola – these were Cloak’s regular characters.  Guest stars for the pilot included Mark Richman, Judi Merideth, and a pre-Hogan's Heroes Werner Klemperer as the monstrous Malaki.  As the series was period-based, a reasonably plausible turn-of-the-century San Francisco was required; fortunately, fog-shrouded streets would hide less-than-stellar production values.  Indeed, Laird wisely spent the lion’s share of his initial budget on Malaki’s showcased monster make-up, a magnificent creation realized by John Chambers, Jack Barron, and the usual Bud Westmore team at Universal.

His pilot finished, Laird sat and waited.  But not for too long, because U decided that the best way to push their scary new product was to introduce Black Cloak as an installment of NBC’s The Alfred Hitchcock Hour, under the enigmatic title “Something with Claws” (Malaki’s pseudo-Ripper uses demon talons, rather than a knife, to slaughter victims).  Actually, the Hitchcock/Black Cloak relationship had already been forged, with Hitch Executive Producer Norman Lloyd providing the monster’s eerie voice.  Later, Lloyd would pooh-pooh Laird’s film, declaring how proud he was that, in all the years that Hitchcock’s show ran on network TV, it never lowered itself to showcasing a pilot for somebody else’s weekly series.

But destined for the Hitchcock Hour “Claws” was, and at least one announcement appeared in TV Guide discussing the ambitious episode and possible weekly series.  Laird’s little film was even given a Hitchcock Hour production number, and the opening titles were prepared using fonts associated with H’s program (still visible underneath the current credits).

Then, somewhat unexpectedly, NBC and Universal got cold feet.  Just as they feared Don Siegel’s TV movie The Killers might be too violent for the small screen, prompting a theatrical release of the picture instead, the powers that be pretty much did the same thing with Black Cloak, or “Something with Claws” if you prefer.  Renaming the entire affair Dark Intruder, Universal exploited this 59-minute pilot as a supporting ‘feature’ for William Castle’s I Saw What You Did in 1965.  It was seen by relatively few (I caught the double-bill as a kid at Brooklyn’s Marboro Theater, thank you, gawking at Joan Crawford on a publicity tour in the process) before entering 16mm TV syndication a few years later in an MCA movie package.

So, in what ways other than the obvious was Black Cloak a pre-Night Stalker?  Well to begin with, all of U’s supernatural sleuths prior to David Chase’s series might be described as anti-Kolchaks: these were handsome, mature, sophisticated leading men, as if Universal were casting a show like The Name of the Game or The Bold Ones.  Carl’s wacky Van Helsing-like antics almost play as a parody of what the studio was initially trying to accomplish.  Although Kingsford pretends to be a carefree playboy a la Bruce Wayne, he is a dynamic action character when required… and this is significant, because so is his supernatural adversary.  It’s actually rather startling to watch the “stuntman monster” approach popularized by Curtis in his Night Stalker efforts on full display here, almost a decade earlier.  Demonoid Malaki attacks with primal fury, and these memorable scenes are shot for maximum excitement, employing hand-held photography, quick editing and fight choreography worthy of the best ‘60s action films (Intruder actually received better reviews than Castle’s top-billed movie).  Indeed, the semi-acrobatic, made for TV stuntman monster was born right here, folks, thanks primarily to audacious producer Laird and scripter Barre Lyndon (The Lodger, War of the Worlds).

Today, Dark Intruder is something of a lost film (U claims to have misplaced the original neg two decades ago), although dupey 16mm-derived incarnations can be found at Sinister Cinema and other PD video outlets.  Tidbit #1: Lalo Schifrin’s dandy music score—lots of occult “gongs” and massive organ notes, anticipating Billy Goldenberg’s work—turned up in “The Monkey’s Paw – A Retelling” and other Hitchcock Hour shows in ’65, as “Something with Claws” was intended to be just another episode, with its music cues available for other Hitch installments.  It also resurfaces in Laird’s Night Gallery series some eight years later (the better than usual John Newland-directed episode “There Aren’t Any More MacBanes” makes excellent use of it).  Tidbit #2: Period sleuths who investigate spooky serial killers must have been the rage in the mid-‘60s; Warners practically mirrored Universal’s Black Cloak trajectory one year later with Chambers of Horrors, the theatrically-released pilot for their proposed (but unsold) House of Wax series.  This time it was Cesare (Valley of the Dragons) Danova doing the snooping, with cleaver-handed Patrick O’Neal as the pilot’s “monster of the week” guest star. 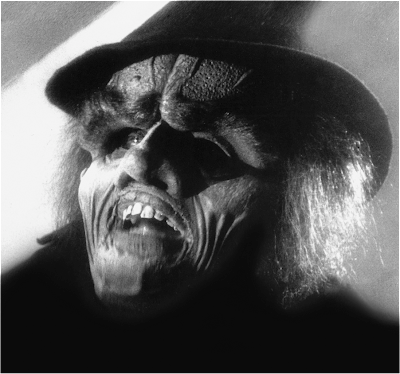 Yep, that’s Colonel Klink himself underneath John Chambers’
monster make-up; both Werner Klemperer and Mark Richman
donned the mask, with Richman going through an extensive
Jekyll-and-Hyde transformation at film’s end. 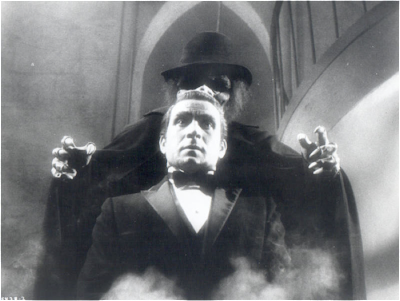 Robert Vandenburg (Mark Richman) is about to be possessed
by his demonic twin brother Professor Malaki (Klemperer),
“something with claws.”