Spotlight on The Night Strangler

Creating a sequel is a tricky business that usually involves walking a tightrope between being too similar to, and too different from, the original; the latter concern is especially acute in television, where what is different is regarded with deep-seated suspicion…until the next Twin Peaks or X-Files appears to spawn its host of imitations.  Tellingly, the working title of The Night Strangler, The Time Killer, was supplanted with something closer to the original, and its carefully selected airdate was less than a week after the first anniversary of the night on which the original had set new viewership records.  In this writer’s opinion, the worst that can be said of Strangler—which reunited Stalker’s male leads and most of its crew—is that it hews too close to what came before. 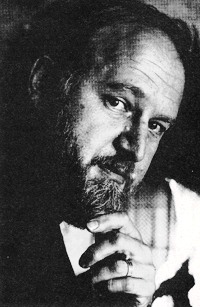 Richard Matheson’s Strangler script had another, less obvious antecedent, for while a family trip to Seattle’s Underground City had inspired its setting, he has recalled a meeting at which he and a group of ABC executives had trouble deciding upon the nature of its antagonist (e.g., vampire, werewolf).  Matheson’s first choice was Jack the Ripper, who had come Stateside and somehow retained his youth, but the writer shifted gears out of deference to his friend Robert Bloch, whose “Yours Truly, Jack the Ripper” appeared in Weird Tales in July 1943.  Yet a cursory comparison between Strangler and Barré Lyndon’s 1961 Thriller adaptation of Bloch’s classic reveals that in all but name, Dr. Richard Malcolm is the Ripper, who then kicked off the weekly Kolchak series.

The very sense of déjà vu that Matheson himself acknowledges in Kolchak’s Strangler narration is partly offset by another strong supporting cast embodying Carl’s new friends (Jo Ann Pflug, so fondly remembered as Lt. Dish in Robert Altman’s MASH; Wally Cox, who died weeks after the film’s premiere) and foes (Richard Anderson, a Forbidden Planet veteran who later played Oscar Goldman in two bionic series; Scott Brady, younger brother of Lawrence Tierney).  Two notable characters, Hester Crabwell and Llewellyn Crossbinder, were actually repurposed from the novel on which The Night Stalker was based.  It was finally published under that title, piggybacking on the original’s success, and its author, Jeff Rice, returned the compliment by novelizing Strangler. 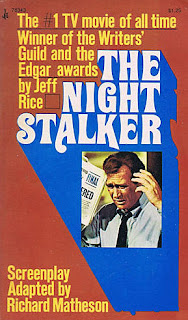 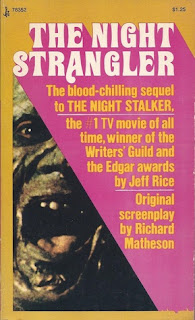 The longer running time of Strangler’s 90-minute syndicated and home-video version allows for some extra antics (if not, alas, the lost “Jimmy Stacks” footage accounting for the unseen George Tobias’s presence in some cast lists).  But this does not obscure the fact that the main story beats from the original are repeated precisely, accompanied by recycled Cobert themes, and my guess is that the 74-minute broadcast version played even more like Stalker Redux.  Sometimes they try too hard, as when Kolchak expresses surprise that Schubert knows the word “vituperation,” even though the police captain has shown himself in earlier confrontations to be a well-spoken, albeit disagreeable, man; it’s an obvious attempt to recall Sheriff Butcher’s “suffrage/sufferance” gaffe.

The key crewmember Strangler did not carry over was John Llewellyn Moxey (who also helmed Matheson’s Ghost Story pilot, “The New House”); producer Dan Curtis now had the confidence to assume the director’s chair, where he remained for the rest of his various collaborations with Matheson.  Both seemed to be on the same wavelength, upping the humor quotient, and it could be argued that the somewhat lighter tone formed the template for the weekly series that followed, sans Curtis or Matheson, yet perhaps alienated those who preferred their Kolchak less tongue-in-cheek and more fang-in-neck.  As with the genesis of Strangler itself, however, the road from sequel to series was not as straightforward as it appeared to us civilian viewers in that fall of ’74.

In the interim, plans were set in motion for a third Kolchak TV-movie (and possible pilot), The Night Killers; it should be noted, by the way, that although some erroneously refer to the original Night Stalker as a pilot, it was intended as no such thing at the time.  With a profusion of irons in the fire, Matheson recruited his friend William F. Nolan, a fellow author who worked with Curtis on The Norliss Tapes, The Turn of the Screw, and the feature film Burnt Offerings, among others.  Their unproduced teleplay, eventually published in Richard Matheson’s Kolchak Scripts (edited by Mark Dawidziak), was one of several Matheson/Nolan script collaborations that did not come to fruition, a conspicuous exception being the Matheson-based Curtis telefilm Trilogy of Terror.

Set in Honolulu, The Night Killers had a premise far fresher in 1973 than it would be today, with aliens using android lookalikes to replace politicians.  Accounts differ as to why the project was shelved (e.g., bad blood between Curtis and McGavin during the shooting of Strangler; concern on McGavin’s part that the third script was too similar to the others) or how close it actually got to being produced, but the bottom line was that except for stars McGavin and Oakland, the series would be in new hands.  Knowing that Curtis would not be involved, Matheson turned down the post of story editor—as he had with Rod Serling’s second anthology series, Night Gallery—and he and Kolchak, whose screen character he had such a hand in shaping, went their separate ways.


Matthew R. Bradley is the author of Richard Matheson on Screen, now in its third printing from McFarland, and the co-editor—with Stanley Wiater and Paul Stuve—of The Richard Matheson Companion

(Gauntlet, 2008), revised and updated as The Twilight and Other Zones: The Dark Worlds of Richard Matheson