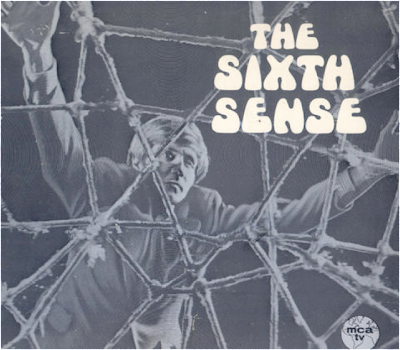 Universal’s Fear No Evil was more than just the first made-for-TV horror film.  It established the template for countless occult-themed Movie of the Weeks that followed, most of them embracing a specific visual style (dreamy slow-motion, Vaseline-smeared wide angles, star lens effects, etc.) and musical personality (‘romantic mysticism’ scores a la Goldenberg).  Sweet, Sweet Rachel was a 90-minute 1971 MOW that played on ABC’s Saturday night incarnation of the skein (like Spielberg’s Duel).  Once again an attractive heroine (this time Stefanie Powers) is dramatically besieged by mysterious and terrifying visions that challenge her sanity.  A pair of ESP experts rather than a supernatural-saavy psychiatrist look into the case, and, after some conventional criminality is exposed, these frightening psychic interludes are laid to rest.  Significantly, there are no demons, witches, or other-worldly creatures at work here, just the semi-related, visually-stimulating terrors of ESP thought-projection.  Unlike virtually all of ABC’s Saturday night MOWs, Sweet, Sweet Rachel was an independently-produced telefilm, not Universal’s latest pilot confection.  But when ratings for Rachel were strong and a Saturday night “spook” series was requested by ABC in ‘71, the resulting weekly program would indeed be produced by Big U… providing the long-patient studio and viewers in general with television’s first, regularly-scheduled supernatural sleuth.

Or psychic investigator, to be more precise.  “The original actor we had (Orson Welles-like Alex Drier) wasn’t handsome enough for Universal,” recalls Rachel scripter and series creator Anthony (“The Man Who Was Never Born”) Lawrence.  Clearly, MCA saw The Sixth Sense as a way to follow through with their already-prepared Bedeviled formula, now that NBC had finally given up on David Sorel and ABC was developing various projects with U’s ultra-active TV division.  Significantly, Sense as a series would solve two of Bedeviled’s most vexing problems: the show’s hero was to be a parapsychologist, meaning that it was literally his job to investigate guest star hauntings on a regular basis (it’s almost as if we’re watching dramatizations of various cases).  This central premise was far more plausible than an offbeat shrink who happens to battle supernatural deities on a weekly basis.  Perhaps an even more important deciding factor in green-lighting Sixth Sense: ESP terrors were far less controversial than diabolical anti-Christs invoked by blasphemous devil-worshippers, eliminating a specific conceptual angle that might offend certain viewers while replacing it with a visually/conceptually-comparable alternative.  Handsome, suave Dr. Michael Rhodes (Gary Collins) would be called in whenever breathless guest-stars found themselves besieged by eerie visions or vengeful apparitions, this harrowing “return from the dead” often pointing a finger at some unscrupulous, still-living supporting character.  For all intent and purposes, this was NBC’s Bedeviled series minus the Devil.  As if the connection wasn’t obvious enough, U utilized Billy Goldenberg’s distinctive music for the Evil telefilms as background scoring, the composers’ melancholy “Next Time, My Love” (Ritual of Evil theme) dominating the first Sixth Sense episode broadcast and turning up throughout the show’s initial season.  Rhodes’ inevitable ESP flashes were given a cue originally created for Diana Hyland’s spell-casting, and the show’s first opening title theme, handled by David Shire, was promptly replaced with BG’s sitar-driven composition created for the unlaunched Bedeviled series, but first heard in an episode of The Name of the Game (“One of the Girls in Research”).  When I observed guest star Belinda (Ritual of Evil) Montgomery running elegantly in a slo-mo set-piece during the teaser for Sense’s premiere episode, as Ritual’s distinctive theme played in the background, I knew that what Richard Alan Simmons had originally started back in ’69 had finally found a home on network television.

The Sixth Sense was still a series version of Sweet, Sweet Rachel, even if it resembled the Evil telefilms more in terms of style, formula and presentation.  That meant you either accepted ghost-hunting as a worthy alternative for demon-slaying, or you didn’t.  Back in 1972, the glass seemed half-empty to me; I was overjoyed that U had finally launched a supernatural sleuth series, with Goldenberg music no less, but missed the hardcore demonology and witchcraft angle.  Not that Sixth Sense didn’t dabble in occasional hexing (a form of ESP projection, after all); in “Witch, Witch, Burning Bright,” a New Salem nasty who flies (!) returns centuries later to imperil Dr. Rhodes and his grandfather, played by ever-reliable Harry Townes.  Typical of the series, Rhodes eventually explains that this “witch” really wasn’t an actual ghost or supernatural entity, but rather a psychic projection of revenge that was so powerful it persisted all these years.  To that bit of rationalization I say, what’s the difference?

Yep, ESP shamus Dr. Michael Rhodes was “Mannix in a cemetery,” after Rod Serling’s description of what Universal and NBC truly wanted from his Night Gallery series (conventional heroic action, rather than offbeat spooky stories).  More often than not, the mysteries solved by Rhodes were boringly mundane murder schemes, brought to the doctor’s attention by colorful paranormal visions.  Still, some episodes managed to push psychic set-pieces into truly imaginative and frightening experiences.  In “With This Ring, I Thee Kill!” a man is frightened to death by the ruthless apparition of silent cinema’s Man in the Iron Mask, brandishing a deadly ectoplasmic sword.  And in “Shadow in the Well,” an EC Comics-like drowned guy returns from the grave to menace guest star Mary Ann Mobley (Collins’ real-life wife)… leaving some tangible moss behind as a souvenir.

The Sixth Sense didn’t last very long – 25 episodes, with three different opening title themes (including a second season original by Goldenberg, matched to some evocative fantasy graphics).  As most fans know, every episode of SS was ultimately cut in half and added to Night Gallery’s syndication package in the mid-‘70s, and these truncated abortions represented the show for nearly three decades.  In many ways, Sense is more interesting when viewed today (in its entirety, of course) than back in 1972.  Besieged in the 21st Century with the likes of Buffy, Twilight and Supernatural, it’s downright refreshing to see some dignity and restraint in a TV series premise of this kind.

Dignity and restraint would be deliciously absent from Kolchak: The Night Stalker (1974), Universal’s final foray into supernatural sleuthing and just about the antithesis of everything that came before.  Like Sixth Sense, Kolchak was developed from a non-Universal property, logically brought to Hollywood’s horror experts for a weekly incarnation.  In many ways, Carl’s comical style and the overall winky tone of the series were a fitting conclusion to U’s decade-old desire for a modern era Van Helsing, literally pitting Jeff Rice’s rumpled hero against the iconic, Universalesque bogeymen of yesteryear.  It would be the end of a TV era well-remembered, one that dazzled us devoted fright fans with seemingly relentless variations on a most satisfying, still viable supernatural formula.

SPECIAL BONUS! A sampling of ‘60s and ‘70s Supernatural Sleuths from other TV studios!

(which takes on that famous nightmare voyage from Varna to Whitby, as you-know-who feeds on the crew of the Demeter), is available now and has garnered several nice reviews.