Mark Dawidziak on The Ripper

After Richard Matheson deliberated and sweated over the story for The Night Strangler, ultimately deciding NOT to use Jack the Ripper as the killer (out of deference to his friend Robert Bloch's story "Yours Truly, Jack the Ripper"), the Kolchak: The Night Stalker series premiered with a Rudolph Borchert script using that very premise. The unkindest cut of all? 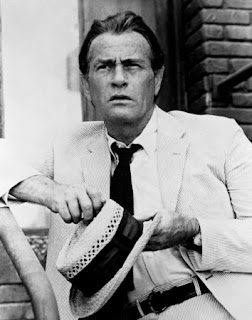 Well, Richard, after all, turned down the chance to work on the series as story editor. And since Dan Curtis and Darren McGavin weren't speaking at that point, there was little chance of Dan being involved, either. "If Dan had done the series," Richard told me, "I would have done the series. When I learned that he didn't have involvement in it, I decided not to have involvement in it. Frankly, I was sort of relieved. We'd had so much trouble coming up with a story for The Night Strangler. But that was so tough that I couldn't imagine how they could come up with a new monster every week."

They started, of course, with Jack the Ripper. "The Ripper" aired September 13, 1974, which, appropriately enough, was a Friday the 13th. I remember it well. I was starting my freshman year at George Washington University, working toward a journalism career and learning from Carl to wear sneakers whenever possible.

This was my evaluation of the episode for The Night Stalker Companion:

Both thematically and stylistically, "The Ripper" relies on techniques established in the two TV movies, The Night Stalker and The Night Strangler. Indeed, the episode is something of a combination of elements from The Night Stalker (right down to tracking the monster to a spooky old house) and The Night Strangler. Still, it is a spooky and well-paced combination. Like several Kolchak episodes, it suffers from the “is something missing?” syndrome. With less than an hour to play with, "The Ripper" never bothers to explain the mysterious connection between Jack and electricity. It doesn’t even suggest how the Ripper’s life has been unnaturally prolonged. Is this part of the whole electricity angle? And it kills off the extremely likable Jane in a brutally abrupt manner. Kolchak doesn’t get the chance to express the merest whiff of sorrow or regret. I pretty much stand by that, but, hate to say it, with repeated viewings over the year, I like this episode less and less. As the Ripper, Mickey Gilbert is given absolutely no chance to develop a real character, frightening or otherwise. He's really nothing more than an imposing presence in black. There should be some explanation of how electricity plays into this. Each time I watch this episode, I feel like I'm missing something (or that a scene is missing). And the formula similarities with The Night Stalker and The Night Strangler seem more obvious. The episode ends with Carl saying, "How could you explain it? Who could explain it? Who'd believe it?" I might have believed it if they at least tried to explain it.

Here, too, starts the strain of we've-got-to-stop-meeting-like-this. First, the vampire in Las Vegas. Then the murderous alchemist in Seattle. Now the Ripper in Chicago. For a reporter whose beat isn't the paranormal, Carl sure seems to attract every ghoulie and ghostie on the beat.

Still, as with all the episodes of Kolchak: The Night Stalker, there are elements to recommend it, starting with McGavin still-energetic, still-vibrant portrayal of Kolchak (more electrifying than the Ripper, to be sure). Allen Baron's direction also establishes an eerie mood and moves the story along, minimizing the damage caused by the considerable plot holes.

FAVORITE MOMENT: Although reminiscent of a similar scene in Janos Skorzeny's house, Carl hiding in the Ripper's closet. Nicely done. Again and again, the Ripper reaches in for something, his lethal hands passing within inches of Carl’s face. If Carl remains silent, he’ll be safe. But, finally, he can’t take it anymore. He panics, yells out and bolts from the closet. Picking up on the concept of the flawed hero, the climax gives us a Kolchak who's not always smart and not always brave in a prime-time hero sense, but is tremendously human.

FAVORITE LINE: Still has be, "I run a lot." (Carl explaining why he wears those white sneakers)

SECOND FAVORITE LINE: Carl again: "For reasons I have never been able to understand, Vincenzo was always confusing my reporter's clever ingenuity with what he calls high-handed lunacy."

And here, too, begins the confusion caused by the casting of Ruth McDevitt as a briefly glimpsed character who is NOT Miss Emily. This is how I summarized the Cowles conundrum in The Night Stalker Companion:

The unseen (she's on vacation) advice columnist is named Emily Fenwick, but when Ruth McDevitt shows up in the fifth episode as Miss Emily, her name is Edith Cowles (spelled both Cowles and Cowels in different cast lists). In the eighth episode, her name was changed to Emily Cowles, and this it remained for the rest of the series. To add to the confusion, however, McDevitt appears in this first episode as an elderly woman who sends a letter to Miss Emily. The bizarre twist has her sending a letter to herself. Although confusing to viewers who see the episodes out of sequence, it's a touch that somehow fits The Night Stalker.

When I wrote Grave Secrets, I gave a tip of the bird-feeder hat to this moniker mix-up by giving Miss Emily a sister named Edith.

TRIVIA NOTE: Beatrice Colen (1948-99), who played the unfortunate Jane Plumm, was the granddaughter of legendary Broadway playwright George S. Kaufman, who co-authored two plays for the Marx Brothers (The Coconuts and Animal Crackers) and two plays that won the Pulitzer Prize (You Can't Take It With You and Of Thee I Sing). She appeared as Etta Candy on The New Adventures of Wonder Woman and as Marsha the waitress on Happy Days. The same year that "The Ripper" aired, she appeared in a TV production of June Moon, the comedy her grandfather wrote with Ring Lardner (it starred Kevin McCarthy, Susan Sarandon, Jack Cassidy and, in a minor role, Stephen Sondheim).

TRIVIA NOTE: Ken Lynch (1910-90) plays Captain Warren, the first in a long line of police officials  infuriated by Kolchak on the series. "You're an absurd man," he tells the reporter. Lynch, who played Sgt. Grover on McCloud, already had appeared in episodes of The Twilight Zone ("Mr. Denton on Doomsday") and Star Trek ("The Devil in the Dark"). The Cleveland native played policemen in Anatomy of a Murder and North By Northwest, two of the best movies of 1959 (the same year Lynch appeared with McGavin in an episode of Riverboat. He also appeared in three episodes of Thriller: "A Good Imagination," "A Third for Pinochle" and "Man of Mystery."

TRIVIA NOTE: Mickey Gilbert, a busy stunt man and double, played the Ripper, returning to play the Mummy in "Legacy of Terror."
Posted by Mark Dawidziak at 12:00 PM