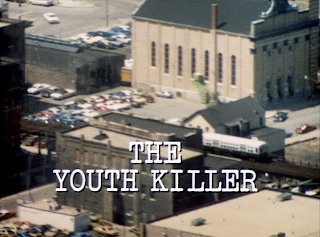 Kolchak's assignment to write a swinging-singles article just happens to coincide with a series of mysterious deaths in Chicago, where bodies of young folks are not just turning up dead, they're turning up old.

JS: In this episode, we find out a little more about Carl when it becomes clear that the thought of marriage is more terrifying to him than any of the monsters he has faced.

PE: One wonders: if Carl had stayed on the Swingin' Singles Scene story like Tony Vincenzo had ordered him to do, would he have worked his way around to uncovering Helen of Troy anyway?

JS: Unfortunately things get off to a bad start with the jogger. Dissolves were not the best way to go to establish the instant aging. It just didn't work. I did like how the guys who came to collect the dead body the next morning basically picked it up like a bag of trash and threw it onto the gurney. No respect for old folks in this episode, that's for sure (with our apologies to Miss Emily).

PE: For an old-timer, Cynthia Tibbs does a fabulous half-gainer off her balcony. The three judges below rated Tibbs an average of 9. But, other than the fact that a future Olympic diver is no more, I'm mystified as to why the entire police force of Chicago had to show up to the scene.

JS: I thought her aging scene was handled brilliantly. As she dipped in and out of frame during her exercise routine,  she went through a number of interesting make-up transitions before going over the edge (Since this scene was obviously filmed without cuts, I thought it was brilliant that the make-up man was able to apply each prosthesis in a matter of seconds!-PE). Make note of this, because it's an indication that they weren't without the skills or budget to do decent old-age make-ups. 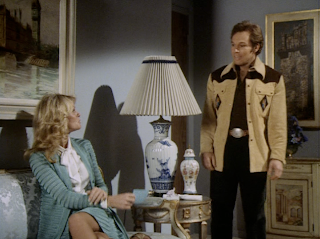 PE: Lance (Michael Richardson) comes to his computer dating interview dressed to the nines. I've never tried one of these dating services but I can tell I wouldn't go far. I don't own a Chuck Norris jacket or Elvis belt buckle and I've never worn lipstick. Well, not that shade at least. Later, when he's getting dressed (as Bobby Riggs, if I'm not mistaken), there's some queasy stuff going on with Lance's domineering mother. I'm not sure I'd want my mom checking out the fur on my legs and, if she was, I'd appreciate it if she'd keep it to herself. JS: I have to imagine that for the computer nerds of 1975, there was nothing quite like seeing Cathy Lee Crosby fondle a punch card. My question is this: by giving Helen in toga gear curly hair, and Helen in the office Farrah-hair, were they trying to imply that these were two different women?

PE: The stretching of credibility this episode doesn't stem from a goddess with bad make-up who gets rid of the sandbags under her eyes by stealing the youth of men but the fact that Carl Kolchak was able to match that key to an apartment.

JS: While I guess we owe the writer our appreciation for not spinning another 'every 69 years Helen has to suck the life out of attractive young men and women' yarn, wouldn't it make sense that in her aged state, Helen look more like the aged state of her victims (and, is that Cathy's nose or a leftover prop from Twilight Zone's "Eye of the Beholder"?-PE)? 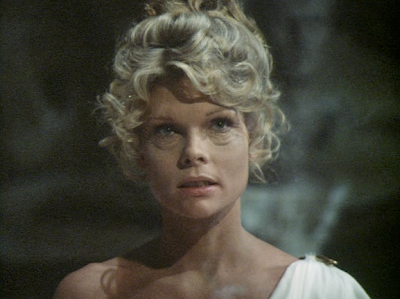 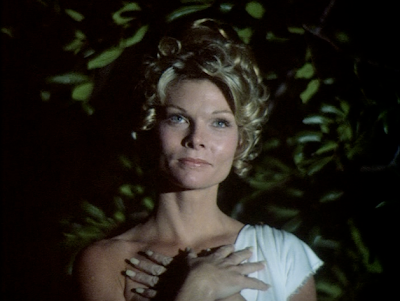 PE: Other than those monstrous potato sacks under Cathy Lee's eyes, she looks like she's doin' pretty good to me. Now, if the make-up man had rigged up some grey in that beautiful blonde hair, some wrinkles on those perfect hands, and some of those down-to-the-knees breasts I've seen in the clubs I frequent, I'd have found it a little easier to believe that this Helen was a few thousand years old.

JS: Perhaps Crosby had it in her contract that she could never look worse than could be hidden by a pair of sunglasses when she wasn't needed on set.

PE: Watching Lance's last few minutes as he staggers through the park, I sure called that Bobby Riggs resemblance on the nose, didn't I?

JS: It's a reasonable trick at some point during an age-transformation scene to replace your young actor with an older actor, but if you're going to do that, you should at least try and find actors who look remotely alike. I can only imagine how bad this would have looked if the only old timer central casting could come up with on that day had been black. One thing I'm curious about is where this episode fell in production order. Carl made a reference to Tony doing Yoga in "The Knightly Murders," however his weight-loss regimen appears to originate here.

PE: What's the story with the Greek cab driver? Carl run out of museum curators? That's Telly Savalas' brother, George (who used his middle name, Demosthenes, for his TV roles), moonlighting as the brilliant Greek scholar/cabbie.

JS: Not only did I think he was fine, I actually preferred him to a number of the 'museum curators' that can only serve the plot of the particular episode they appear in. I assumed he's just one of the many connections that Carl has made through the years (like last episode's pawn shop owner who Carl was collaborating with on his biography). Had the show continued, I like to think that Carl would have been back the next time Pandora's Box was opened. 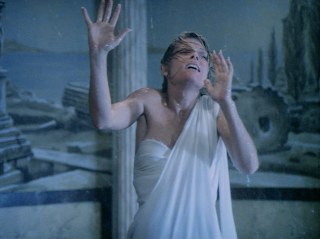 PE: Not much to say about this one. Definitely the worst episode of the series in my book, with the only plus being its obvious message, that we've become too wrapped up in beauty for our own good.  Obviously, in the 35 years since this was first aired, that facet of our society has only gotten worse. Is Helen the stand-in for the average woman who'll do anything, including human sacrifice, to stay young and beautiful? I'd have sacrificed a few goats to get some laughs with Tony Vincenzo. The only "humor" we get here is a drunk who keeps butting in to Carl's conversation with the cabbie. It's an awful sequence, smelling like some of the worst Foster Brooks routines, and stands out from the humor in past episodes like a Star Trek fan at Helen of Troy's Mix and Match dating service. I doubt you'd have found a scene like this in a David Chase script. One half a typewriter for Crosby's wet toga. 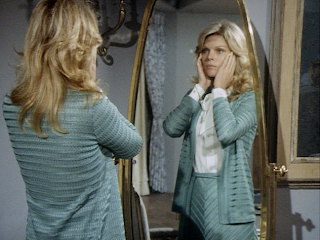 JS: For me, a few interesting old-age make-ups and the lovely contemporary Crosby (you can have the toga version - wet or dry) raise this one above the near UF-Zero of "They Have Been..." 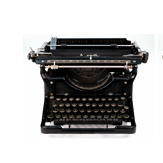 Next up... Kolchak faces The Lizard People!
Posted by Peter Enfantino at 6:00 AM