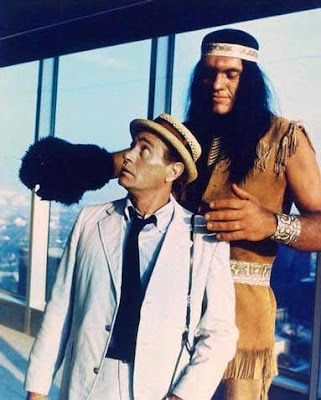 Mixed feelings about this one. On a park-the-brain-under-the-sofa level, I've always rather enjoyed "Bad Medicine." Let it go by like a raven gliding from one building ledge to another, and it's a reasonably entertaining adventure. It's not a great supernatural story, by any means. A better story could have been crafted from the actual Diablero legends from the Sonora area of Mexico. But the episode certainly moves along at a pretty good clip. It has several genuinely spooky touches, making the shape-shifting Diablero creepy and very believably threatening. It also has several nice comic touches, thanks to regulars Simon Oakland, Jack Grinnage and Ruth McDevitt, as well as guest stars Marvin Kaplan and Alice Ghostley (was there ever a guest star whose named better suited the show?) And it's unquestionably the better of the two Native American stories done for Kolchak: The Night Stalker (yeah, I know, not saying much, considering how little there is to recommend "The Energy Eater"; and, while we're counting, I suppose there are three such episodes if you count Aztec-themed "Legacy of Terror").

It is not,  however, the better of the two consecutive stories featuring Richard Kiel as the towering monster figure Kolchak must find a way to confront in a dark lair and vanquish. That distinction, of course, belongs to our next episode, "The Spanish Moss Murders." "Bad Medicine," chills and all, does not balance the humor and horror elements nearly as effectively. Still, Kiel obviously is more recognizable in the Diablero garb, even if his portrayal is somewhat one-dimensional. He suggests immense physical power, to be sure, but the Diablero according to Sonoran legend, is a brujo (medicine man or sorcerer) who practices black magic. The Kolchak team probably became aware of this legend through the writings of anthropologist and author Carlos Castaneda, whose 1968 book, The Teachigs of Don Juan: A Yaqui Way of Knowledge, contained a passage about the diablero shape-shifter legend. See if this sounds at all familiar: "diablero is a term used only by the Sonoran Indians. It refers to an evil person who practices black sorcery and is capable of transforming himself into an animal -- a bird, a dog, a coyote, or any other creature." Here's where the casting of Kiel is questionable. It's not to accept him as a powerful and intimidating presence. But what's lacking is the cunning and sinister slyness of a sorcerer. While Kiel looks like he could rip you apart, he doesn't come across as the type who could use the black arts to weave evil intentions around hapless victims.


There's that marvelous character actor Victor Jory playing Charles Rolling Thunder in this episode. Think of what a young Victor Jory would have done with the Diablero role. Think about his portrayal of Injun Joe in producer David O. Selznick's 1938 version of Mark Twain's The Adventures of Tom Sawyer, menacing those children in that cave. That scene still gives me the creeps. And that type of diablero would have put some really bad intentions into "Bad Medicine." Those kinds of fiendish levels are what the roles calls for, and they are what's lacking in Kiel's performance.

Yet if not as good as it could have been, "Bad Medicine" isn't bad. There's much to appreciate here, starting with Carl's nifty opening narration: "F. Scott Fitzgerald once wrote, 'The rich are different than you and me.' They sure are. They got more money. But there wasnt enough money in the world to save some of the members of  Chicago's upper crust from a fiendish force so dark, it can only be called diabolic."

THE JORY IS IN: Victor Jory played more than his share of Native Americans, from Injun Joe in The Adventures of Tom Sawyer (1938) to Crow chief Iron Belly in his last film, The Mountain Men (1980). In between, he appeared as Tall Tree in John Ford's Cheyenne Autumn (1964), Chief Joseph on a 1965 episode of Gunsmoke and Chief Mean Buffalo on the 1966 "Indian Fever" episode of F Troop. I loved F Troop, by the way.  It was rerun endlessly on WPIX Channel 11 in New York while I was growing up, and in a old-timey vaudeville kind of way, the relentless political incorrectness of the series manged to hit just the right lunatic tone. Too bad they couldn't have worked him into "The Devil's Platform" as well, since he played a Shaman in Devil Dog: The Hound of Hell (Rottweiler or not). One of the screen's great villains, Jory was overseer Jonas Wilkerson in Gone With the Wind (1939). Yet his roles ranged from Oberon in A Midsummer Night's Dream (1935) to Captain Keller in The Miracle Worker (1962).

TOP COP GUEST STAR: One of the best angry police officers tossed at Kolchak was Ramon Bieri's  Captain Joe Baker. He returned episodes later for "Legacy of Terror." Even though again cast as a police officer, the second time he played Captain Webster. Never understood that.

GHOSTLEY AS DR. AGNES TEMPLE: Before playing Dr. Agnes Temple, Alice Ghostley had played Aunt Stephanie in the film adaptation of Harper Lee's To Kill a Mockingbird and had made regular appearances on ABC’s  Bewitched as Esmerelda. She also had co-starred with William Daniels (Lt. Matteo in "The Vampire") on the short-lived situation comedy Captain Nice (NBC, 1967). She later made regular appearances as Bernice on the acclaimed CBS comedy, Designing Women.

GREAT CARL LINE: To INS dark-room staffer complaining about developing pictures: "Why don't you stay in here a little longer and develop a personality." 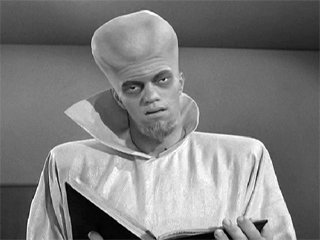 AND YOUR DIABLERO: Several early articles on Kolchak: The Night Stalker identified the diablero actor as Ted Cassidy (Lurch on The Addams Family). Kiel, best known as Jaws in the James Bond films The Spy Who Loved Me (1977) and Moonraker (1979), already had won a place in fantastic-TV fans' hearts as the Kanamit in the classic "To Serve Man" episode of The Twilight Zone (twelve years before "Bad Medicine"). In 1990, he co-wrote and produced The Giant of Thunder Mountain, a family film about the friendship between a little girl and a reclusive mountain man.

And in time and technology caught up with them department: Look closely at the supposedly dead police dog at the gem exchange. He doesn’t play dead long enough. Before the camera cuts away, he moves his head. Not so obvious on the screens of 1974. Dead obvious since the prints were cleaned, digitalize and viewed on 21st-century screens.
Posted by Mark Dawidziak at 12:00 PM